At last! I’m back on the Great Divide Mountain Bike ride, having deviated off route after hitting a few massive storms, like this one and this one. I’m also now riding with brothers Jeff and Jason, who I first bumped into outside a supermarket in Alaska, then at a bike-friendly house party in Montana. 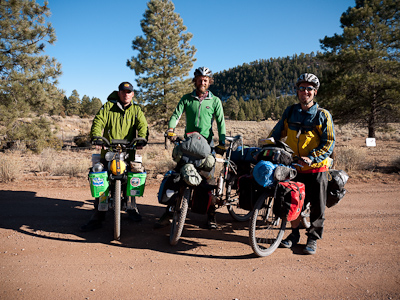 The Wild Bunch. I've finally met up with fellow ferals Jeff and Jason. They've been riding the Great Divide, and also deviated away from the Rockies when the storms hit in Wyoming. 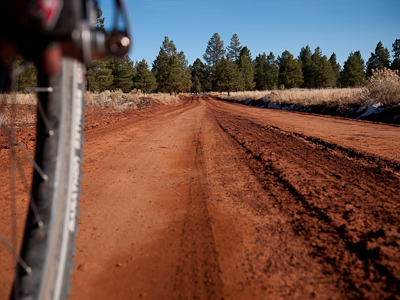 Good to be back on dirt again. From Gallup, I followed FR50, which meant I was off pavement for a good chunk of the way. It was quiet, and I didn't see anyone else but a lady in a jeep crammed with kids. She pulled over, we chatted, and she gave me a medicine wheel made from buffalo hide by a Lakota sundancer. 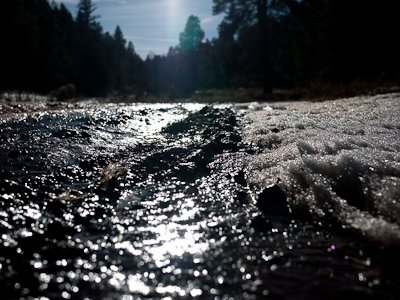 A smorgasboard of conditions. Pavement turned to gravel, which in turned morphed into fast, hardpack dirt. All good stuff, until I hit the snowline, or rather the mushline. 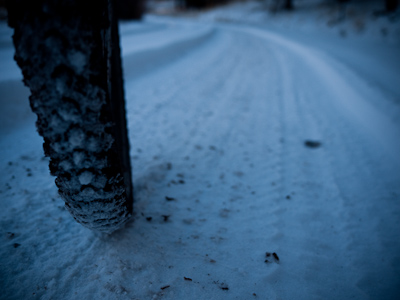 Areas shielded by the sun were grim and cold. Stretches of sheet ice added to the challenge. 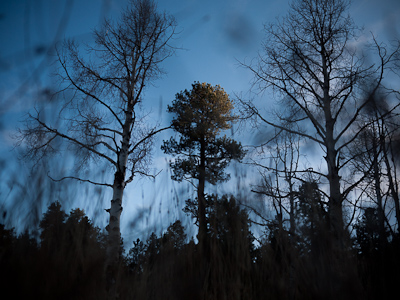 Last light in the forest. Time to pick up the pace. 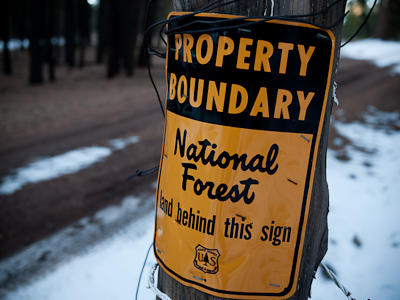 FR50 dips in and out of a chequer board of National Forest land. The good news is that for the most part, you can camp anywhere in National Forest, for up to 14 days. I was keen to push on though and meet up with the others, which meant riding through nightfall too. Sketchy given the conditions. 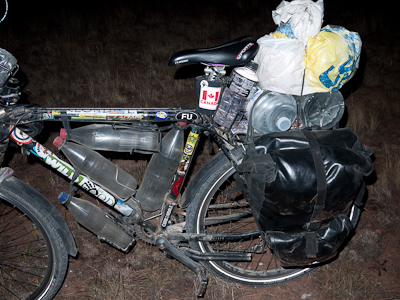 Jeff and Jason were running late too. They turned up just after me, at our prearranged meeting point - a lonely junction in the middle of the forest. With the likelyhood of no access to water over the next few days, they were hauling fourteen litres a piece up a 1000ft climb from Grants. 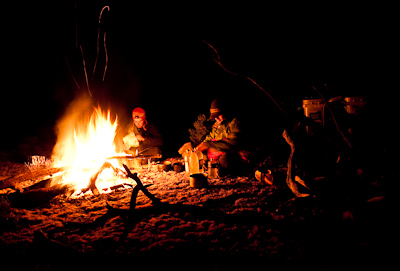 We quickly set up about building a fire, huddling round it as we caught up with our respective adventure these last few months. 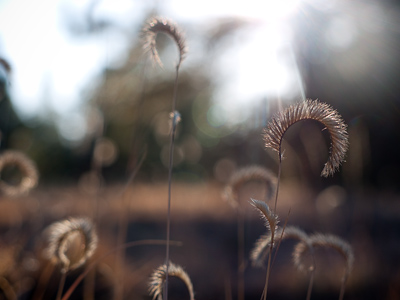 Morning light. With it came heat... 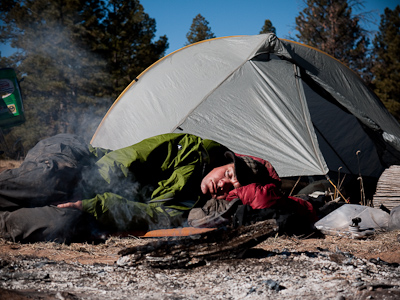 The next day, we pretty much chilled out round the fire. Here's Jason sleeping off the contents of the winebox he'd also hauled up from Grants, as well as all the water. That's dedication. 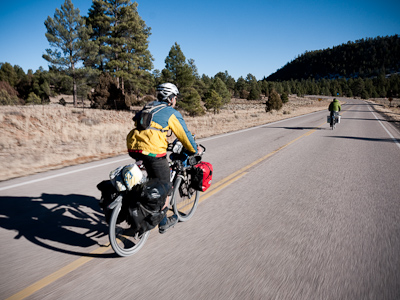 Finally, we extricated ourselves from our sleeping bags and hit the road. 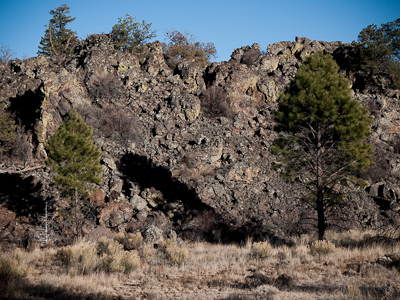 It was a stunning ride, on a hardpack trail past massive lava flows. 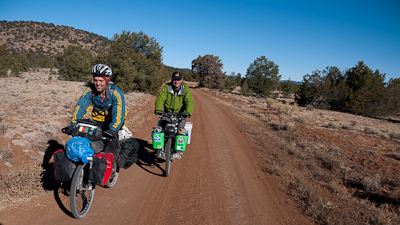 And as is often the case on the GDR, we had the trail to ourselves . 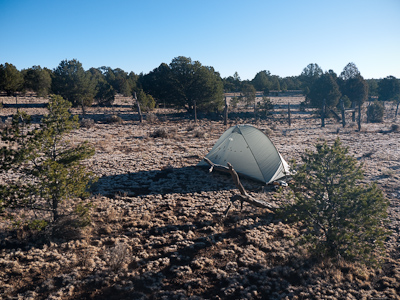 Camping opportunities in New Mexico are proving to be abundant too. It's simply a case of pulling over in the scrubland, pitching the tents and gathering some wood for a fire. In fact, the temperature fluctuations are incredible. Shorts and T shirts in the day, and well below freezing a night. 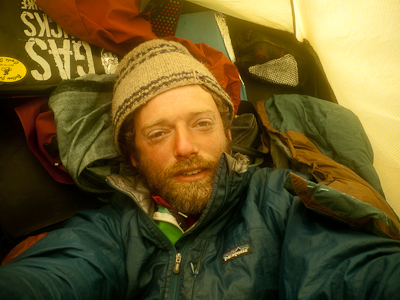 Whoah, is that me?! Here I am in my cocoon, having just woken up after a particularly chilly night's sleep: the temperature had dropped down to well below -15c. My Alpkit 400 sleeping bag, as lovely as it is, is rated to -3c... and the water bottle I stashed in there with me froze solid... 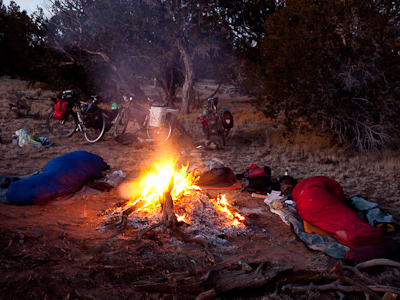 In fact, the next night we arranged an all night fire vigil, taking it in shifts to stoke the fire and keep an eye on errant sparks. Just as well, as the temperature plummeted to -20c or so. New Mexico is a high altitude desert and I've never known such temperature shifts - piping hot in the day, artic cold at night. My shift was from 12.30am to 3am, and I sat and read, listening to the crackle of wood and watching the glowing embers spiral into the night sky like fire flies. A peaceful time. 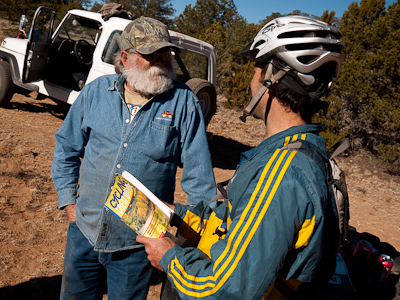 New Mexico feels wondefully remote. We barely saw a soul. At a junction marked by nothing more than a massive tractor tyre, bushy-bearded Ted, who'd passed by earlier in the day, was waiting for us with cold pizza and Coke. 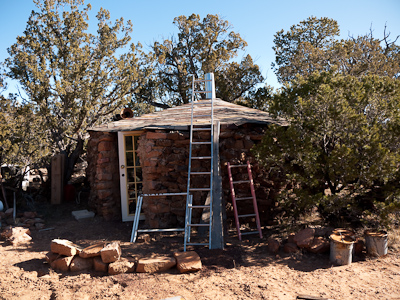 He took us to the hogan, an Indian-style dwelling made from mud and rocks, that he was building way out in the bush, amongst the lava caves and juniper trees. 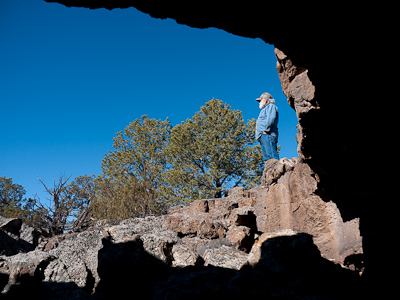 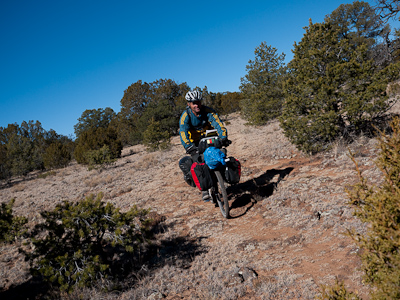 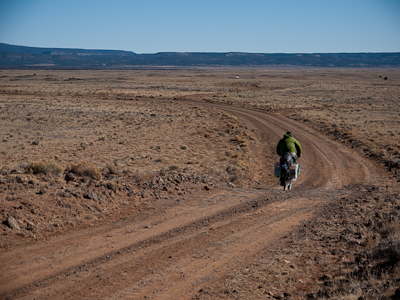 From here, the landscape opened up again into open grasslands as we continued along the Chain of Craters Byway, under a sky bleached out by the sun. 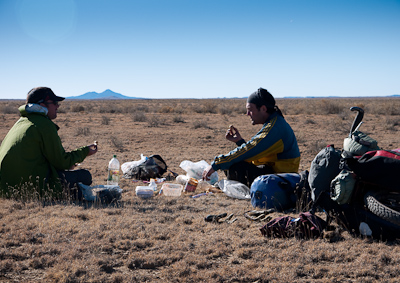 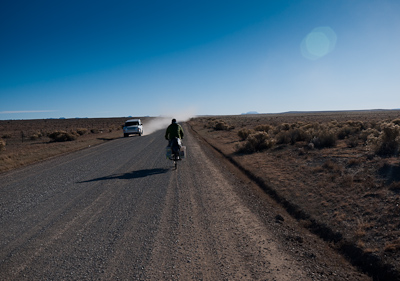 For the most part, the gravel road was quiet. But when vehicles did pass by, they smothered us in dust. 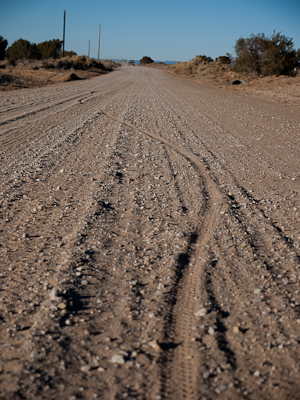 It was getting washboarded and sandy in places too. 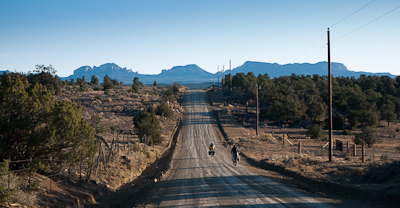 And lumpy. Up and down, up and down... Ahead lay the aptly named Sawtooth Mountains. 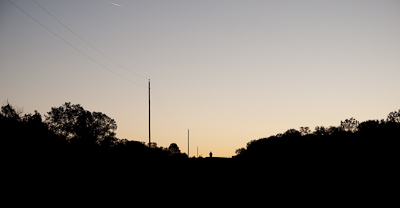 Five miles short of Pie Town, darkness and coldness enveloped us once more. So we pulled over for the night, hastily gathered some wood, and began our all night fire vigil to stay warm. 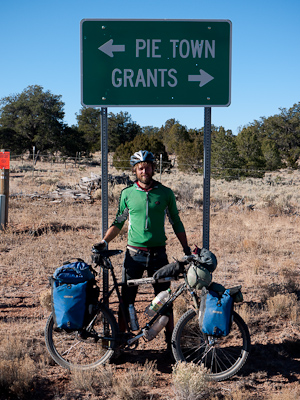 Thankfully, the vigil was a success, all things considered. Certainly a memorable night. We got up early the next morning, and finished off the ride to the fabled Pie Town. We were all starved. Hm, I wonder what's on the menu round here?