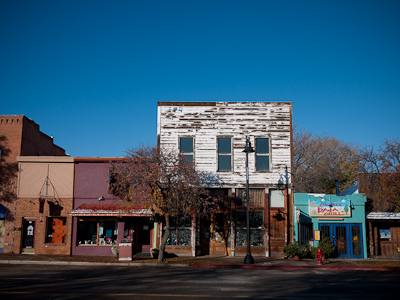 Main Street Moab. Now that the storm's passed, it's blue skies again, with a clear forecast for the next few days.

After the quiet backwaters of Fruita, I’d expected Moab to be fairly commercial in feel, and teeming with legions of bikers (like me). So I was pleasantly surprised at how laid back it was. Sure, arriving at the very tail end of the season probably helped. But still, it had a vibe I really liked, and it’s up there in my Favourite Places Along This Ride. Probably much of this is to do with the people I fell in with, thanks to Cullen, he of the lamb chop sideburns and warm smile, who I met at the somewhat ominously titled Poison Spider bike shop. 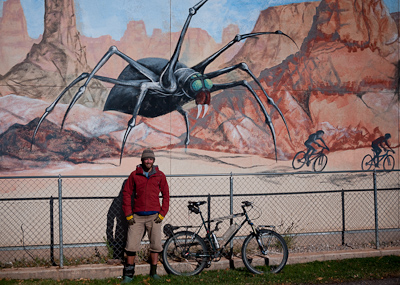 Outside Poison Spider. I'm an arachnophobe but a sucker for murals.

There’s a really strong community feel here. Yoga, recycling, low impact living and the coolest thrift store I’ve seen – it’s packed with outdoor goodies. Everyone’s striving to live the lifestyle they aspire to (biking/climbing/rafting), balancing the life that brings them happiness with the nuts and bolts of making ends meet. Inevitably, much of the population migrates in the winter months to places like Colorado, or even Costa Rica. Some work in forestry, or in the bookstore, or the camping stores, or as guides.

At a party I went to, I met one guy who tracks tortoises in the Mojave Desert. Apparently shell aside, tortoises have the highest level of testosterone of any animal, pound for pound! And despite their placid manners, they’re tenacious little fighters when it comes to winning over the ladies. The males battle it out like sumo wrestlers, trying to tip each other over. If they do,  there’s a technique to righting themselves again. The tortoise begins to arc one its wrinkly little arms in every greater circles, finally twisting his body like a wrester and hurling his arm like a hammer thrower, with one final dynamic movement that spins himself over. How cool is that! Made me think of the wise old Master Oogway from Kung Fu Panda. 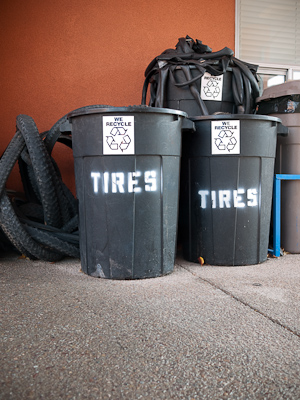 Recycling tyres at the Moab Cyclery. 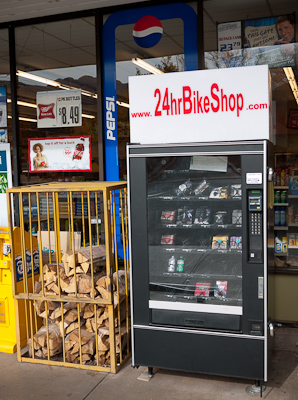 Anywhere else in the world, a vending machine like this would be packed with crisps, Mars and Snickers. Only in Moab is it full of bike bits. 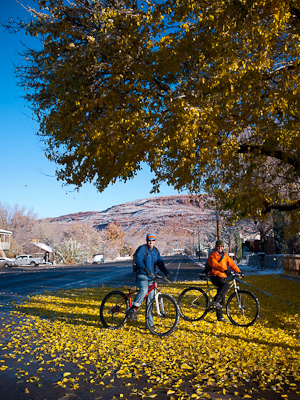 Endurance racer Cullen works as a mountain biking guide and as a bike mechanic. His mate Nick works in forestry fire management in the summer, and as a ski patroller in the in the winter. Great people to hang out with. 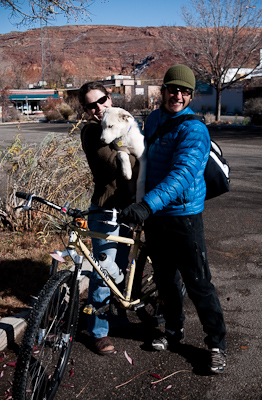 Cullen's girlfriend Joi is an incredible rock climber, and was drawn to the area to spend time in Indian Creek, considered the best sandstone climbing in the world. Here they are with her cute little dog, a husky/labrador cross. 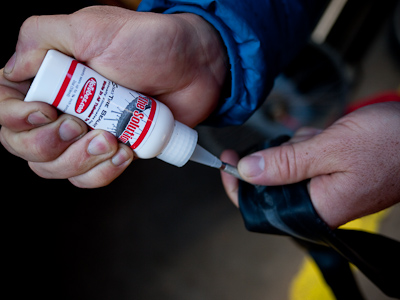 Cullen really sorted me out, ensuring I had all the food I needed for the next leg, and helping make my bike desert-ready, by filling the inner tubes with sealant. 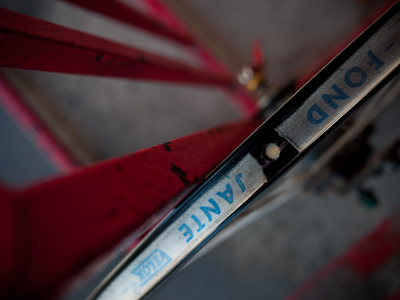 Then he drilled out the rims so they could take Schraeder (car-style) valves in Mexico. We fitted an extra bottle cage to the downtube too, as I'll need to carry 10 litres of water for the desert. 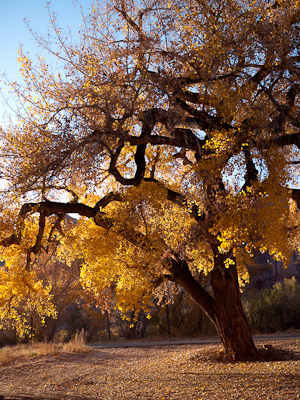 Winter is getting close. Time to move on... 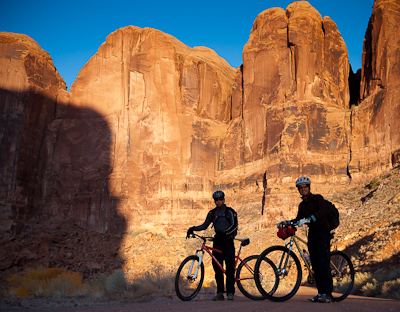 Cullen's housemate Jim had told me about a backway out of Moab, on a rough track that skirted round Canyonlands and Needles National Parks. After waiting for the trails to dry out, it wasn't until late afternoon, when the rocks were saturated in sunset light, that I left Moab. Nick and Cullen joined me, pointing me towards a quiet camping spot in the desert. Then we celebrated our meeting with a round of muffins, before they made their way home by torchlight, leaving me under the silence of the stars, and in the shadows of Moab's magnificent sandstone chimneys. Thanks guys!

8 thoughts on “Around Moab”