I’ve been cogitating a lot about fat bikes these last few months.

You might have spotted these larger than life, balloon-tyre bikes out and about – they’re all the rage right now, as riders branch away from using them specifically for Alaskan snow duties or desert crawling, to less weather-specific trail escapades. 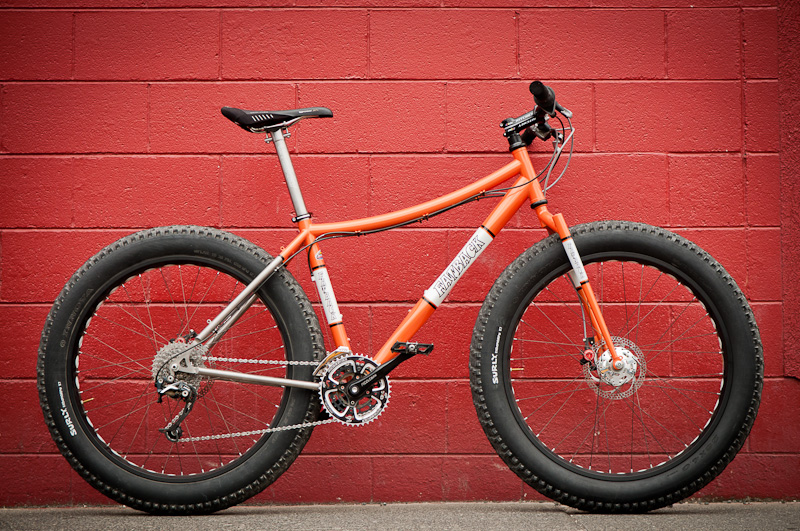 A titanium Fatback fatbike, photographed at the beginning of my trans-american journey, up in Alaska in 2009. Tyres are typically over 3.8in wide, and can be run at absurdly low air pressures – down to 5psi – for crawling through snow and sand. More basic models weigh in at around the 35lb+ mark. I seem to remember this one was sub 28. 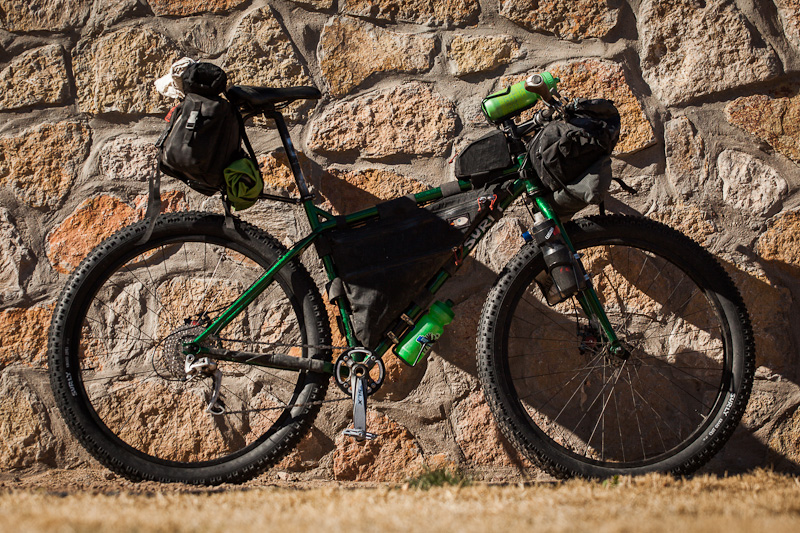 The 29+ Surly Krampus, with its 29×3 Knards. Not as much float as a fat bike, but more lively on trails. The tyre diameter is actually a little larger than that of a 26×3.8 tyre.

Recently, I’ve notched up a fair few miles on the semi-fat Krampus, and although I’ve never spent much time on a ‘true’ fat bike, I’m beginning to really see their potential. That’s not to say that extra wide, low pressure tyres are a requirement for backcountry adventures; more that something about them prods you into doing trips a little out of the ordinary.

Before I was fortunate enough to get my hands on the latest Surly, I was on the verge of biting the bullet on one for the winter (and more) – inspired first by Jakub’s Stock Canning adventure, then by Joe’s travels through Latin America and Nick’s unorthodox journey down from Alaska, and now Dirt Dot Kurt. Further internet dabblings at FatBike.com, Big Dummy Daddy, the Lazy Rando and Coast Kid served only to seal the deal, as did campfire discussions with Nick and Joe. (The general media have even latched on now – like NPR.) Anyway, I was all set to delve into the weird and wonderful world of offset frames, downhill bottom brackets and mammoth tyres – until the Krampus came along.

The way I see it, the Krampus is a beefcake 29er, a bruiser of a bike, boasting bags of extra cush and extra grip. It’s a whole lot of fun to ride. Those 3in Knards are a definite advantage through rock gardens and they’re noticeably more confidence-inspiring through mild snow too. Certainly, it beats me up a whole lot less than my go-to rigid forked Ogre. But as much as I love riding it, I don’t see the Krampus as an attempt to match the roving omni terra abilities of a real fatbike. That’s the domain of a different beast altogether.

For now, I’m living vicariously through others. Jeremy just bought a Surly Neck Romancer (more clever witticisms from the Surly peeps) so I joined him in collecting it from one of my favourite bike shops in Albuquerque, Two Wheel Drive.

The Neck Romancer is a marriage of sorts between the venerable Pugsley (the frame that helped popularise the movement) and the big foot of the fat bike world, the Surly Moonlander – in that it uses a Pugsley frame with a super wide Moonlander fork.

As far as I can decipher, it’s one of the most appealing, affordable way of getting into touring-friendly fat bikes. This year’s build kit includes weight saving cut out rims, plus a versatile Mr Whirly OD crankset and reliable Avid BB7 brakes. The finish is super stealth black, right down to the understated logos and spokes. And – having enjoyed a brief spin on it, I have to say I was really surprised by how fun it rides, despite its obvious heft.

I’m not in the position right now to go custom due to financial constraints, so given my requirements, I’ve whittled down my virtual list to a Salsa Mukluk 2, a Surly Neck Romancer and a standard Pugsley – all of which are relatively easy to get hold of in the US. Importantly, all three have a generous allowance of eyelets and rack mounts for touring potential – ruling out On One’s new budget Fatty for me. I don’t have enough experience to form concrete judgements, but these are my musings so far:

The 170mm rear symetrical spacing on the Mukluk appeals, as it lends itself to a second set of strong but light 29er wheels. The new frames can even fit Rabbit Holes and Knards. The downside? This requires investment in another 170mm hub, which doesn’t come cheap.

The aluminium frame is a touch lighter, and would be protected from rust ingress during a Baja Peninsula exploration, or corrosive salt on winter roads. The Mukluk 2 gets the all important cut out Rolling Darryl rims, a fancy e*thirteen crankset, an11-36T 10 speed cassette and 120tpi (ie ‘lightweight’) Surly Nates. All very nice bits of kit. But parts that also nudge the cost up to $2450…

The Neck appeals as I really like the way it rides. It’s understated, it’s chromo (which I still find myself drawn to – especially if it’s to be strapped to the roof of a Peruvian bus) and the built kit is particularly appealing – there’s nothing but the saddle I’d rush to change. An asymmetrical frame means no need for running spendy, awkward to source hubs – but makes building up a set of lighter 29er wheels more of a challenge. It comes with nice bits too, including the many talented Mr Whirly OD chainset, Avid BB7 brakes, cut out rims and Microshift thumbies – all for $1900.

Like the Mukluk, the Neck has 82mm Rolling Darryls, which is great for eeking out as much grip and float as possible from a 3.8in tyre. But it does mean it won’t play as nice with the likes of a Schwalbe Big Apple 26×2.35, which would lend it more versatility for long distance touring. For that, a standard Pugsley, which uses narrower, 65mm Marge Lites – and comes in a wonderfully blunt yellow finish – might be best. The Pugs will set you back just $1650 – which I think is incredible value given how niche fat bikes and their components currently are (a complete Ogre is $1500, by way of example).

For long distance touring, there’s a couple of factors worth taking into consideration. Not only are fat bike tyres heavy and hard to source, but they cost upwards of $90 each. While they’re good for many a mile on snowy adventures, they’re bound to wear considerably quicker on pavement and trail. Perhaps prices will drop as they become more popular, with the likes of the budget On One Fattie joining the fray. 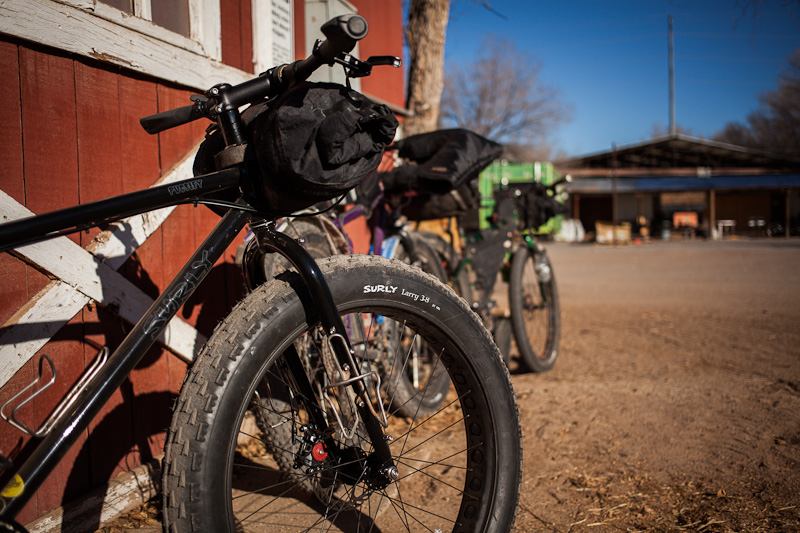 Fat bike fury: Jeremy’s ultra stealth Neck Romancer, Nick’s purple Pugs and my glittery green Krampus. The Neck comes well endowed with rack/mudguard/water bottle eyelets – though it would be nice to have seen a set under the downtube. 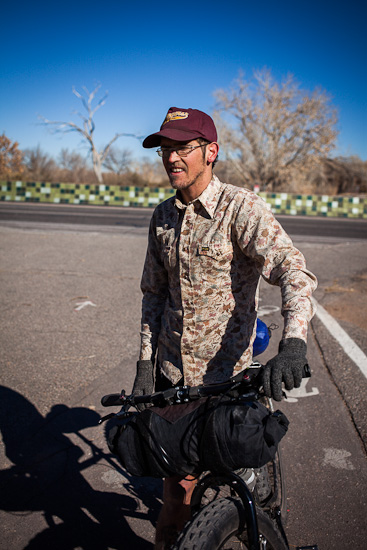 Jeremy and his new steed. Bike-friendly Albuquerque boasts a milder, even t-shirt friendly winter days, being almost 2000ft lower in elevation than nearby Santa Fe. 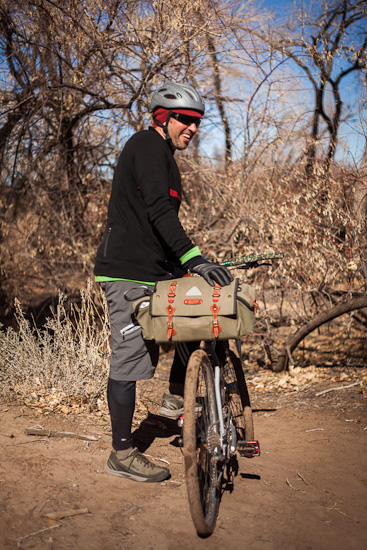 Local framebuilder Dave Salinas joined us for the day – seen here on a Skinny Bike. Dave lead us along the bosque singletrack that wends its way north though the cottonwoods to Bernalillo,  some 25 miles away, where we connected with the Railrunner train to Santa Fe. 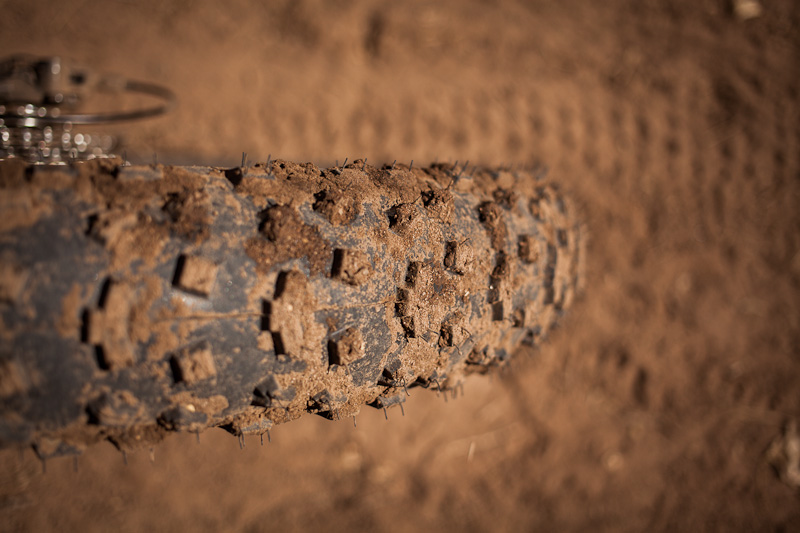 Despite sandy conditions, no shortage of grip from the 3.8in Nate. 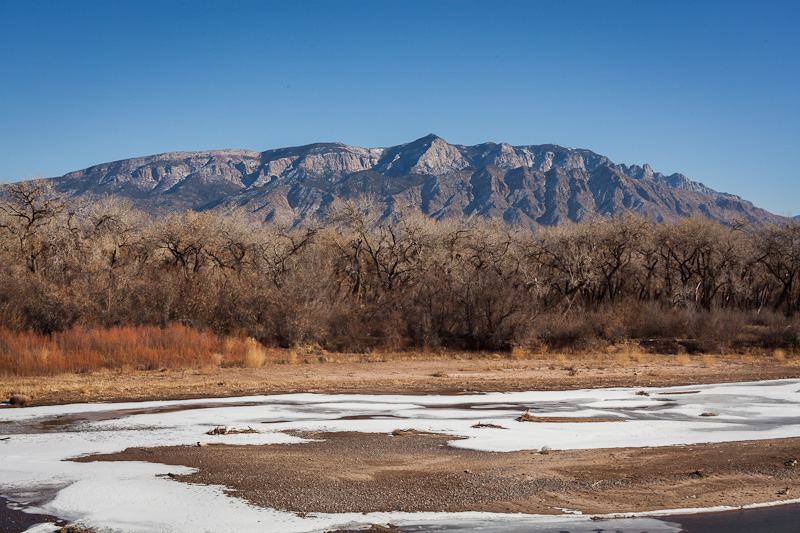 The Sandia Mountains. So named for their shape, and the colour they turn at sunset – like a slice of watermelon. 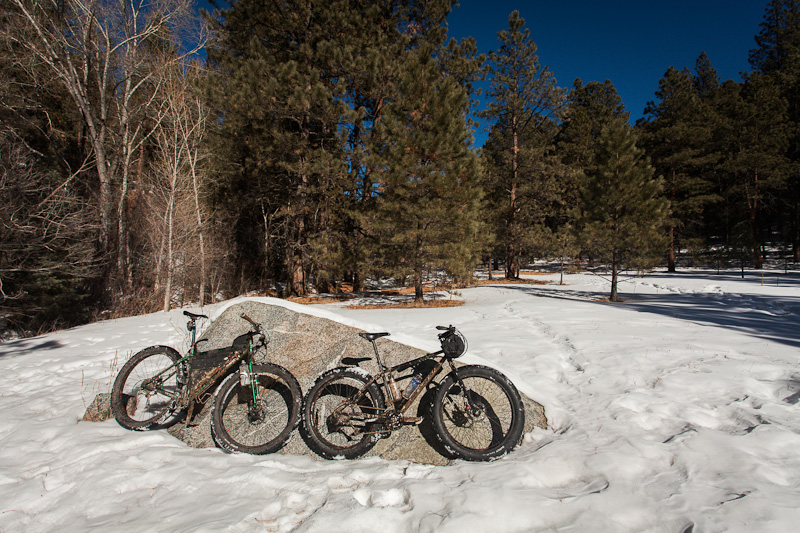 The next day, Jeremy and Iheaded into the Santa Fe National Forest to see how the Krampus and the Neck compared, riding Dale Ball, Chamisa and Windsor Trails. 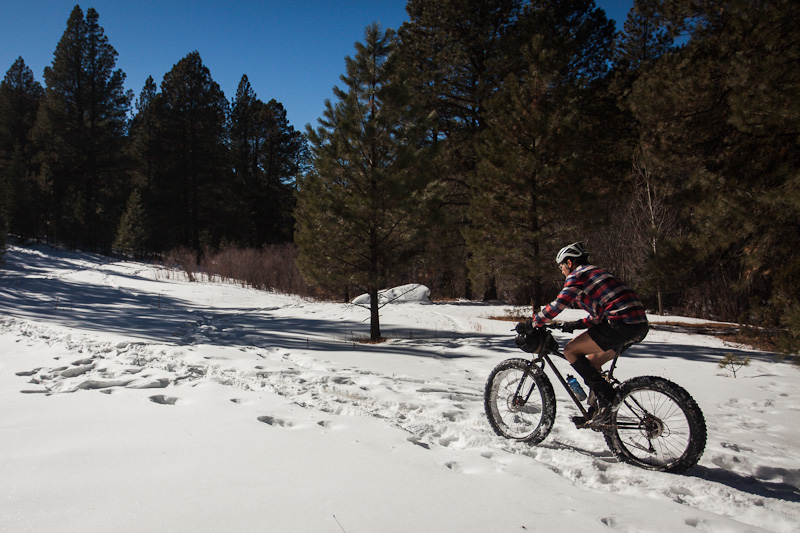 We considered heading north towards Borrego, but for the most part, the snow was too thick and powdery for even for fat tyres. So instead, we turned south and rode the Windsor Trail down to Tesuque. 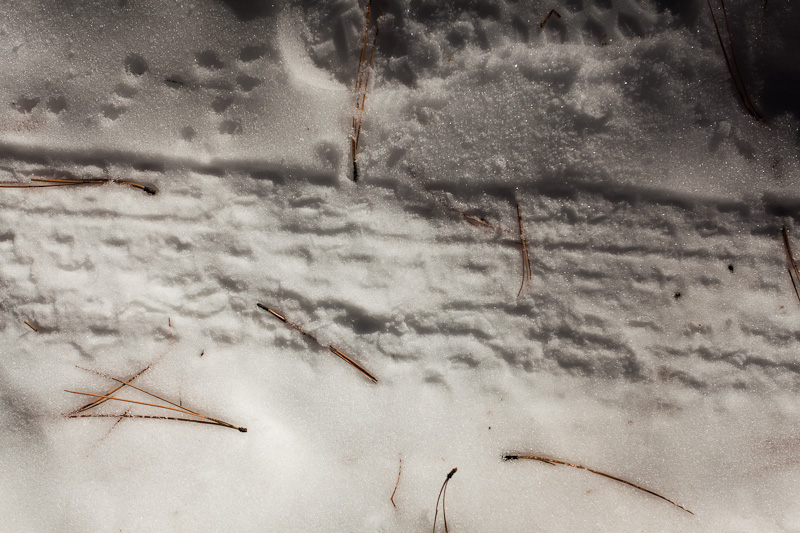 As luck would have it, we were following another set of fat tyre prints, that had done the hard work and packed down the trails nicely in front of us. 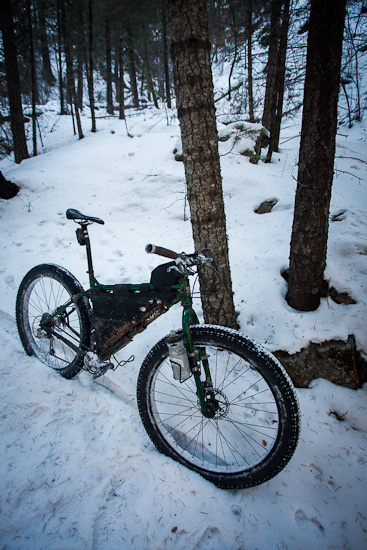 The Krampus struggled a bit where the snow was deeper; letting a whoosh of air from the front tyre made a considerable difference. 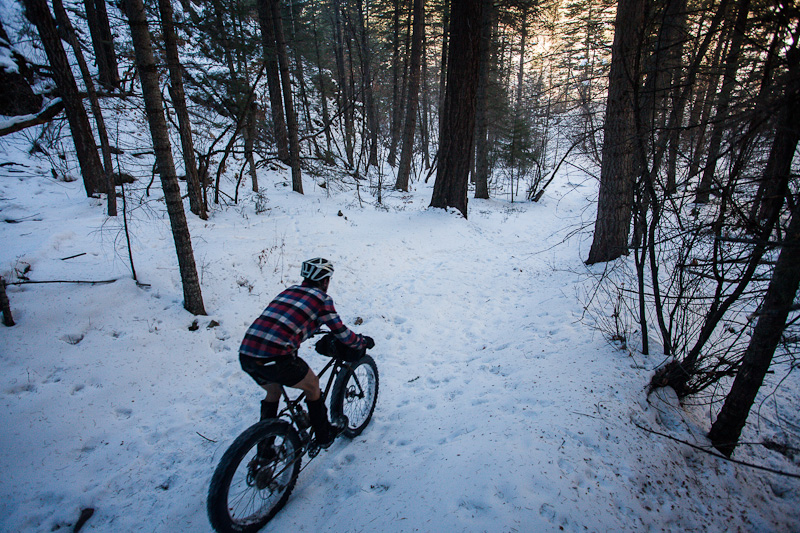 Then the trail became more and more rideable, treating us to big, powdery turns that we carved our way down. Fatbikes aren’t the panacea for any-terrain riding, but they certainly encourage you to make a good stab at it. 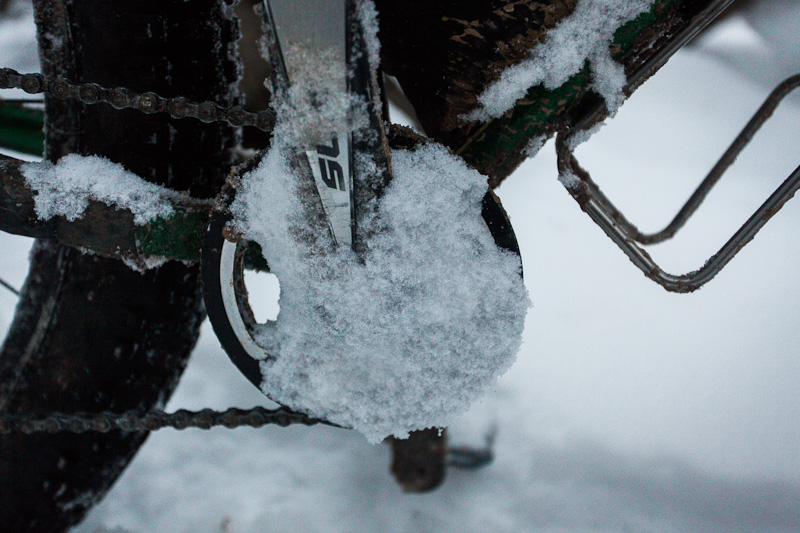 My plan is to rebuild my Rohloff for the Krampus, using one of Cycle Monkey’s nifty Monkey Bones. In the meantime, Nick had nudged the rear wheel a couple of millimetres to the non-drive side, to improve the chain line with a 1×9. 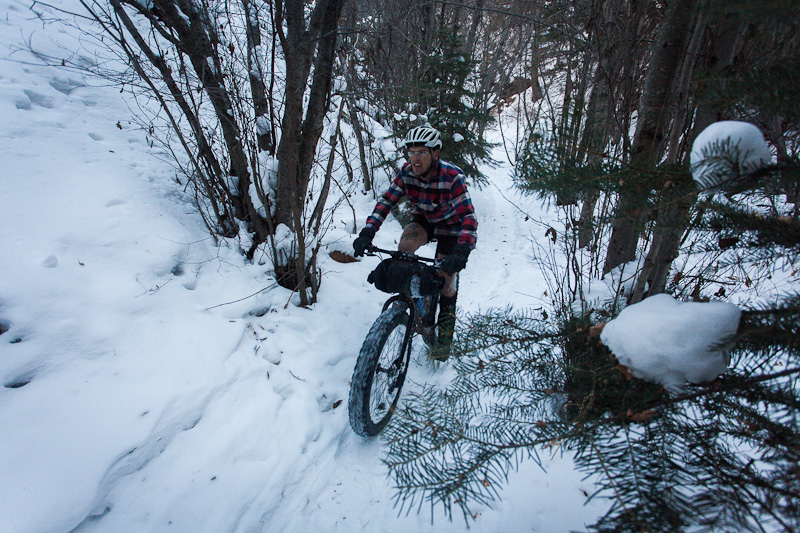 I’ve never seen Jeremy wear trousers. Gaiters are about as far as he gets. 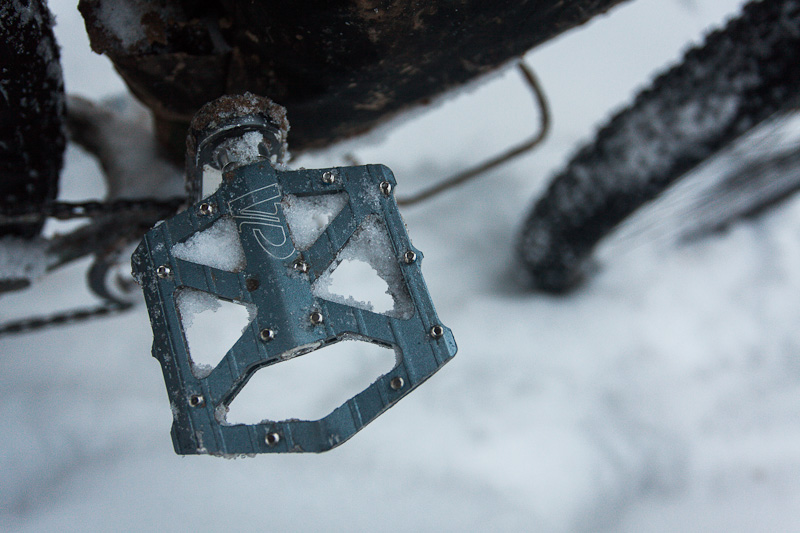 I’m still adjusting to the VP platform pedals for more technical mountain biking – but they’re definitely my pedal of choice for this kind of ride. 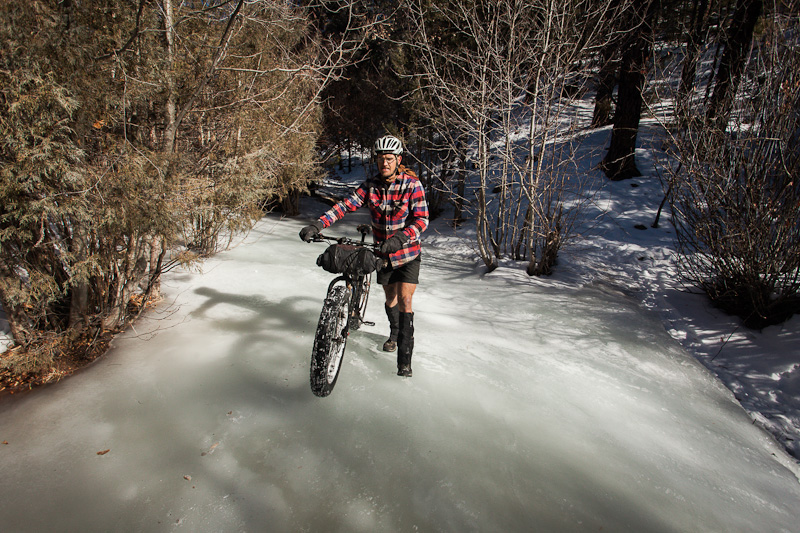 The descent included plenty of sketchy frozen river crossing, as we criss-crossed Tesuque Creek. If you stood still, you could hear the water babbling underneath. 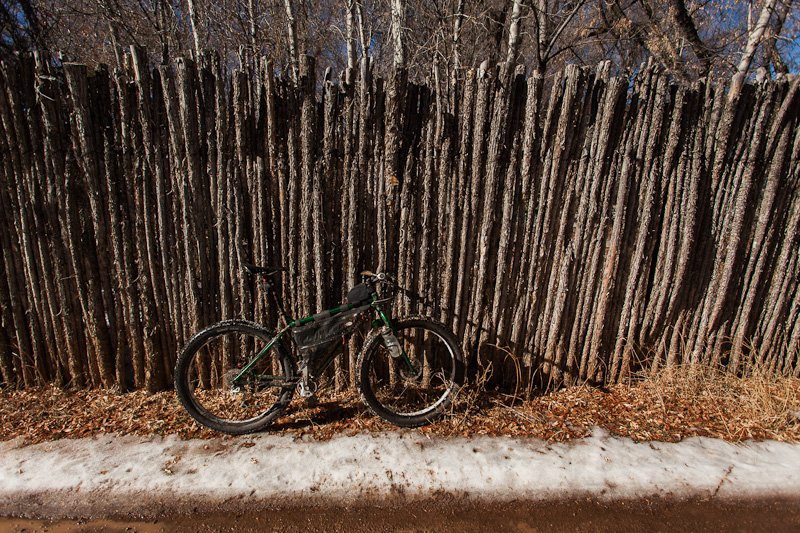 The Krampus, against my favourite coyote fence. There was an ebb and flow to the ride, with regards to the abilities of the Krampus and the Neck Romancer. Through thicker snow, the Neck felt advantageous, and where the trail improved, the Krampus took the lead. 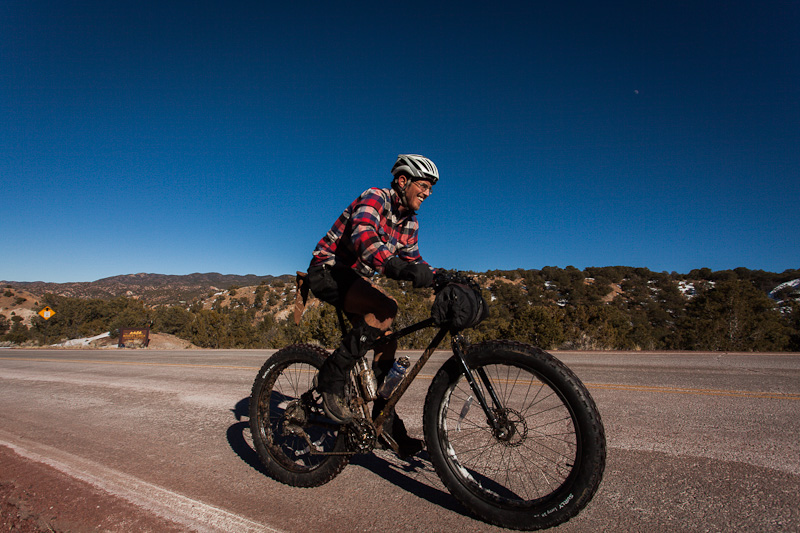 Heading back to Santa Fe. ‘How’s it roll on pavement?’ I asked Jeremy. ‘It’s altright. It’s still a fun bike!’ came the reply. 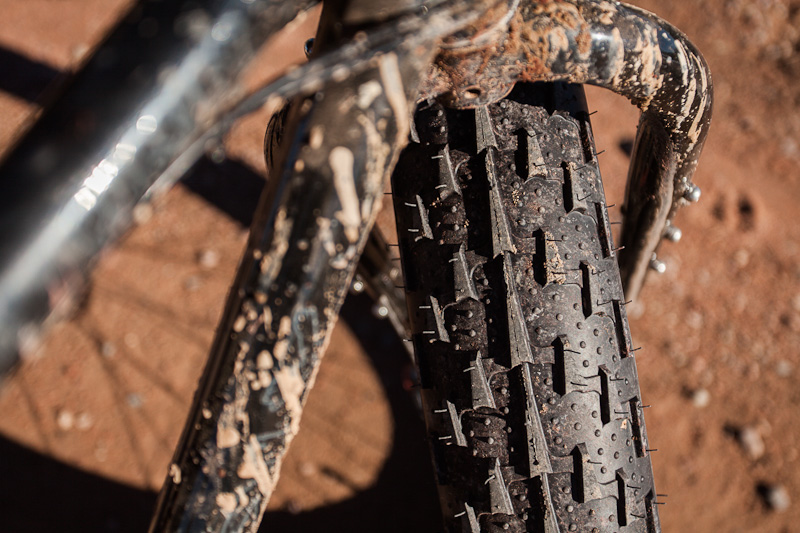 And now a muddy one too. Generous clearances on the symmetrical Moonlander fork, and water bottle or Anything Cage eyelets too. The Larry’s have central tread that seems to roll nicely. 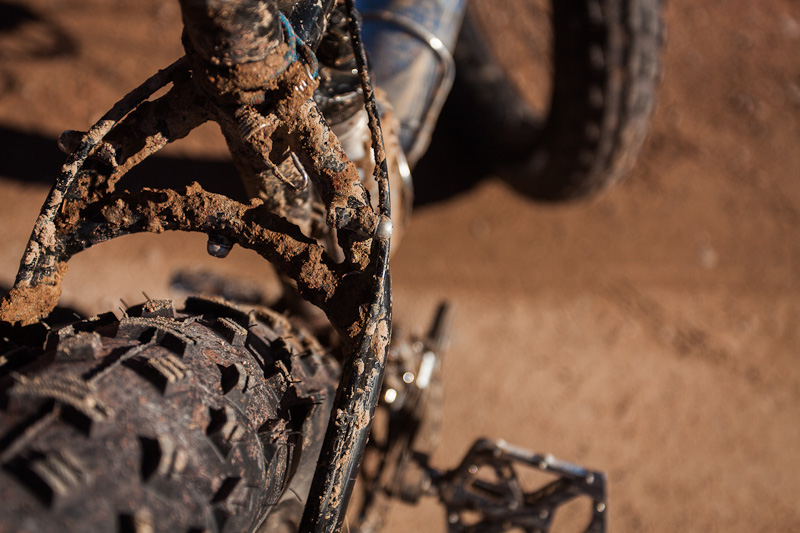 The Nate, running at the back, is chunkier and noisier. Again, good clearances in the frame. 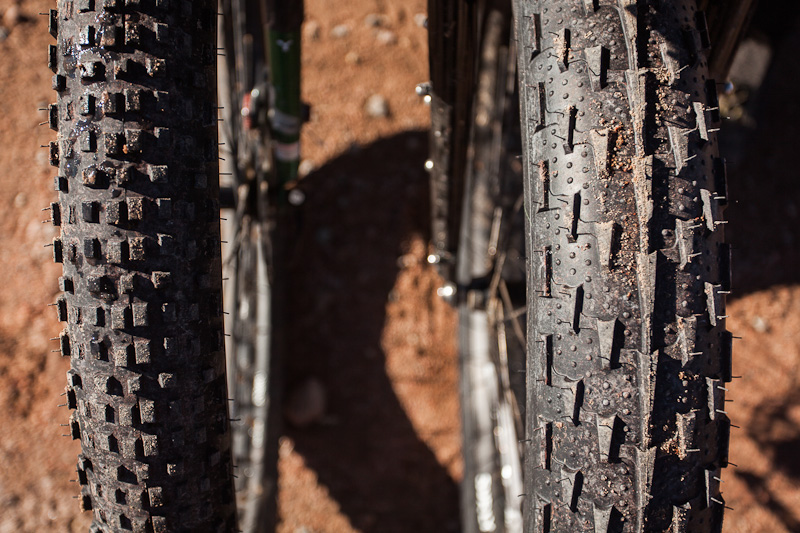 Knard 29×3 versus Larry 26×3.8. The rim difference is important too, with a Rabbit Hole measuring 50mm across and a Rolling Darryl 82mm. 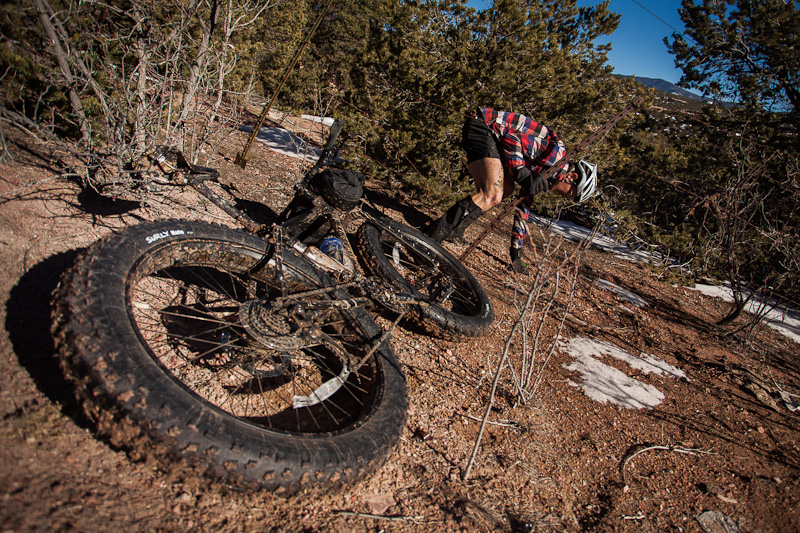 I left Jeremy hopping a fence to bushwack his way home. Fat bikes do that kind of thing to you… 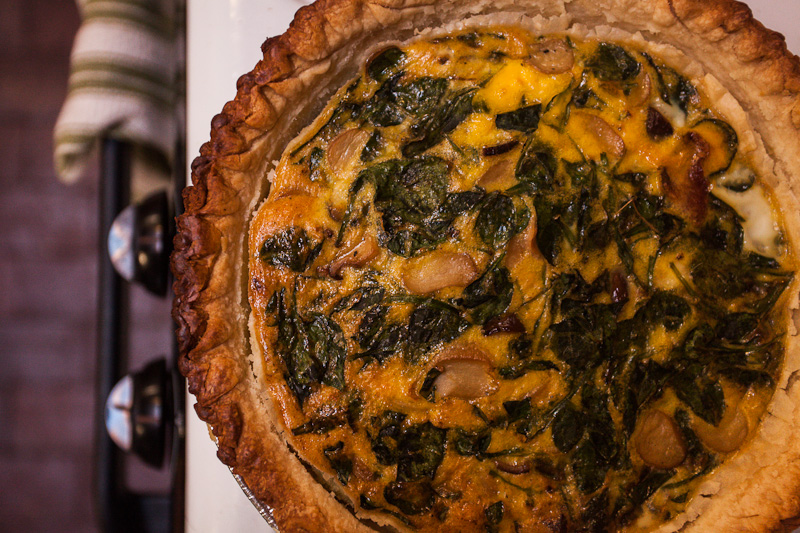 Back in time for some bacon, spinach and trumpet mushroom quiche…