The Big Wheel Keeps on Turning – and the Surly Krampus Project is one step closer to completion. Last Thursday, I took the Railrunner down to Albuquerque ($10 for a day return, including bike and patchy wifi – nice!) to hang out with Nick, and get some ‘proper’ wheels built up.

When it comes to hubs, conventional touring lore favours cup and cone bearings. It makes sense too: it’s a system that can be fully overhauled wherever you are in the world, providing you carry the relevant tools (cone spanners, chain whip or similar, crescent wrench, cassette locknut tool), or get to a bike shop relatively swiftly, should they start to develop any play or grittiness.

In the past, I’ve never had a problem running Shimano hubs, favouring XTs over Deores for their improved seals. But more recently, I haven’t had so much luck with their respective disc counterparts. Both my Deore and XT hubs have backed off more often that I’d have liked – especially on the driveside – while I was travelling in Ecuador and Peru. Reports online suggest I’m not alone with this gripe. Perhaps the disc rotor applies some kind of torsional force that loosens them off more than the non-disc models? I’m not sure. Adding to the awkwardness, the XT model I have (M785) requires a mammoth 14mm hex key to remove the freehub body, which I had real trouble finding – and replacement freehub bodies for that model are particularly pricey too.

Anyway, it’s been enough of a headache that I’m going for sealed cartridge route this time round. The added benefit is that it also does away with the need to carry so many tools, as cartridge-style hubs provide ample warning to source replacement bearings, without risk damaging delicate cups and cones in the interim.

Here’s follows a quick overview of the goods in question, as more in depth data can be found at Nick’s post, with a more detailed discussion on the intricacies of Rabbit Hole building here.

The front hub was provided by Surly, one their Ultra New models. It’s velvety smooth and Surly-burly.

Needing to source a rear, we rang round the various shops in town, checking for stock availability and second hand options, ending up at Fat Tyre Cycles.

As it happens, there’s not a huge range of XT-priced sealed bearing hubs on the market (suggestions welcome). Apart from Halo, most are fairly boutique, from the likes of White Industries, DT Swiss, Hope and Chris King (note to Surly – there’s a gap in the market there…)

The XT hubs Fat Tyre Cycles had in stock were same model as I already own – thus pesky cup and cones (though I should add that the XTs are super easy to adjust). Chris King was both out of my budget, and unsuitable – my last front hub split around the flange (twice), and although others speak highly of their fabled customer service, I wasn’t so lucky. In any case, they’re probably built too light for my uncouth needs.

What we did spot, forlornly gathering dust in a cabinet, was a shiny, Californian Phil Wood, 32 hole, 6 bolt model. Perfect in every way – but for the price tag. Still, I fitted the bill. These hubs are known for their tank-like build, reflected in their dumbell-like weight. Keen to shift lingering stock, I was offered a killer deal: $200, half the price of what you might normally expect to pay (if you had that kind of cash). Still, $200 is $200… But after much lip chewing and pensive contemplation, I gulped and took the plunge. If it lasts as long as I hope, it will be an heirloom for Sage (-; 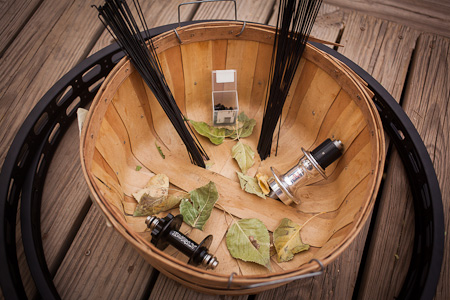 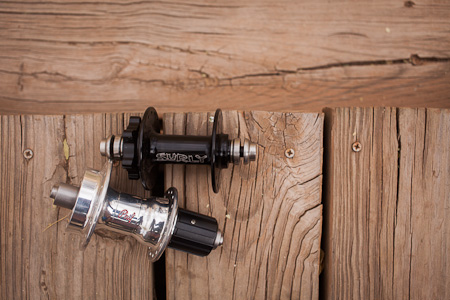 I like my mismatched socks, and, it seems, my mismatched hubs. Note the oil port on the Phil. Another nice touch is that this hub can be serviced with just two 5mm hex keys. 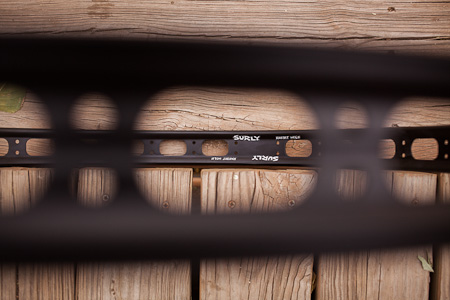 Surly’s Rabbit Hole rims, so named for their weight saving cutouts, are 50mm wide (compared to my Rhynos, ‘just’ 27.5mm). They’re single wall, with double walls in the corners, and weigh a very reasonable 700g. I’ll be very interested to see how they hold up, seeing as I’ve always ridden with conventional double wall rims and I’m not the most delicate of riders. 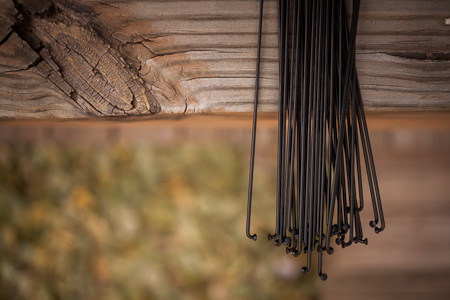 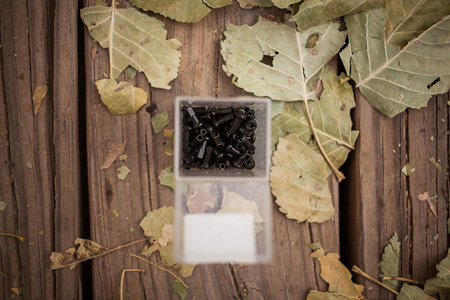 And matching black brass nipples – rather than the aluminium ones they come with, which are prone to breaking. Note to self: don’t forget to apply some grease to discourage them from ceasing. 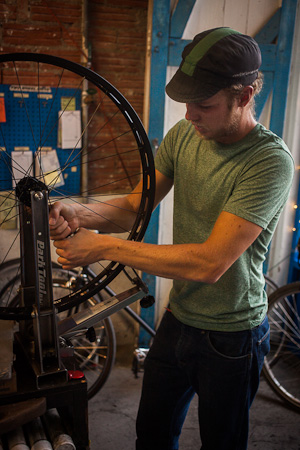 The wheelsmith at work. Kindly, Charlie at 2WD offered us the use of their truing stand, once we’d laced the wheel up. 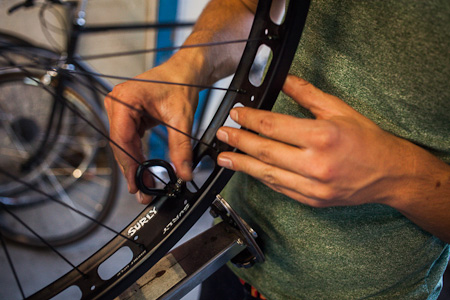 The Rabbit Hole spoke holes are massively offset; 5mm to either side. There are actually two full sets of spoke holes, allowing you to build up a 29er set of wheels for your asymetrically-framed Pugsley. 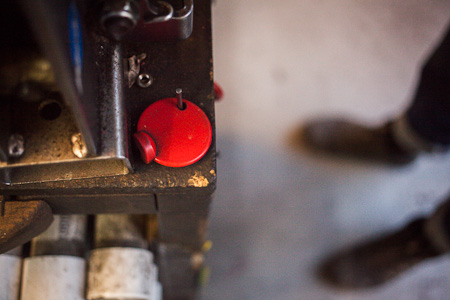 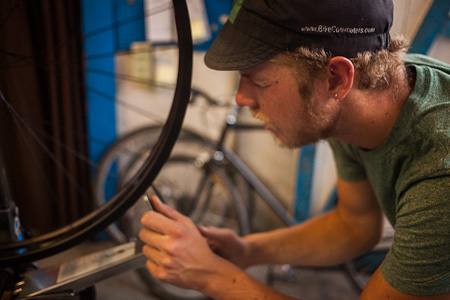 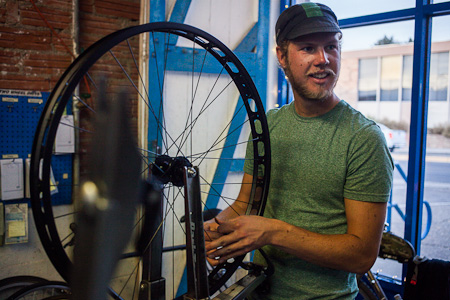 Job done. Nick soon had the wheel brought up to tension, trued and de-stressed. And just in time too, as I had a train back to Santa Fe to catch… 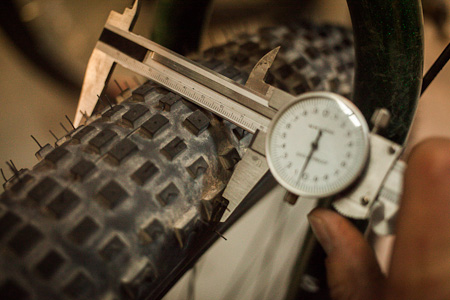 Seating the Knards on 50mm rims makes a massive difference to both their girth and profile, lifting the side nobs into a more useful position than they were in before. These are by far the largest volume tyre I’ve ridden, beyond a few test rides on fat bikes like the Pugs and Mukluk: 78mm wide, casing and tread. For the record, its some 10mm wider than when the Knard was mounted on my Rhyno Lite. I’ll be interested to mount the rear and see how the mud clearances fare. 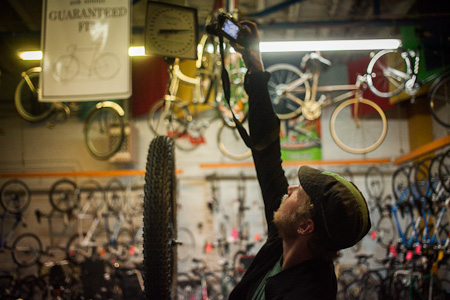 Data is recorded for blogging purposes. I dare not look: 6lbs, inc tube, sealant and rotor. At some point, we have plans to run both Nick’s Pugsley and my Krampus tubeless, which will skim back some valuable rotational weight, and be far more effective against the dastardly goatheads that mine the South West. Note too that these are the 27 tpi models – the 120 tpi folders are some 40% lighter. 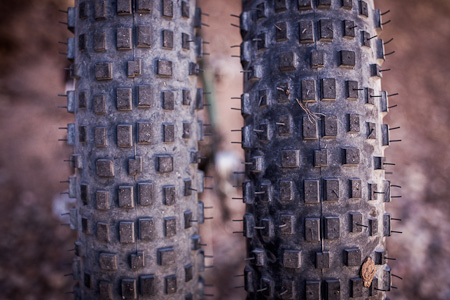 Rhyno Lite to the left. Rabbit Hole to the right. A surprising difference. 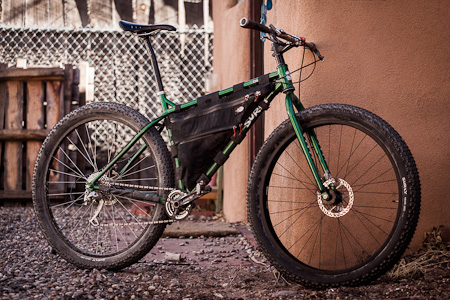 On my first proper ride (for anyone with local knowledge: Dale Ball-Borrego-Windsor-Big T-Chamisa-Dale Ball), I soon appreciated the improved stability of how those portly 3in Knard/50mm rims felt at lower pressures – which in turn translated to extra comfort and improved cornering grip. Previously, I’d been running higher pressures so they didn’t roll off the skinnier rim – now I’ve settled on 13-15psi as a nice front tyre pressure for now. Low, but not so low it risks of pinch flatting. In any case, I’m sure I’ll be tinkering over the next few rides. It’s not an understatement to say these rims transform the ride of the Krampus – I’m definitely starting to get what all the fat bike fuss is about.

Thanks Nick for your expert mechanical skills, and jogging my foggy wheelbuilding memory.

Some additional thoughts and numbers: 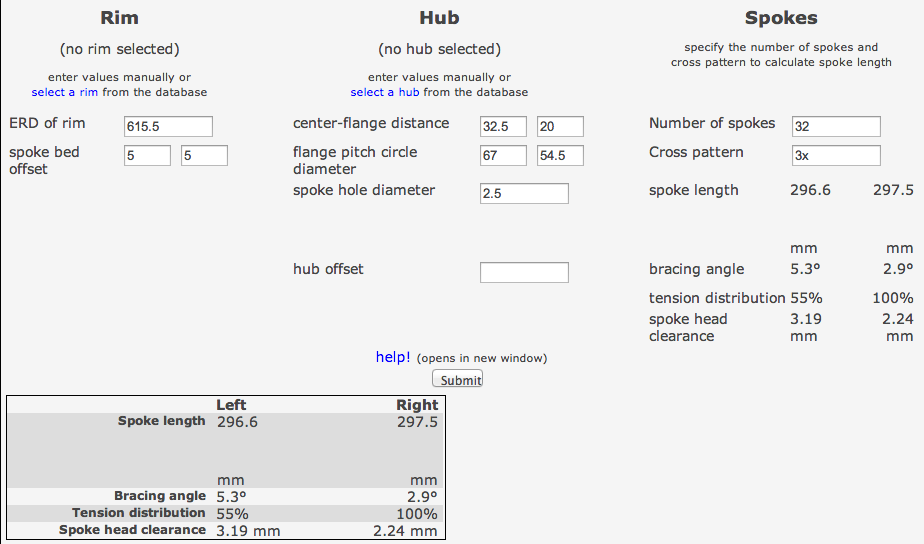 “It occurred to me this morning that we could have built the wheel to one side of the rim, as if building to a normal assymetrical rim like a Dyad or the old Bontrager Mustang.  The way I did it, tension is 2x on the drive side, which is pretty normal.  If we had built to the set of holes entirely on the non-drive side, tension would be almost equal.  But then, people get weird about offset builds.

The summary of these options is that one produces a stronger spoking system, with similar bracing angles and balanced tension. The other, traditional method, gives better support at the rim but inferior tension.  Either way should be fine.

Considering that the spokes won’t break in either case, I suppose the way we did it is better.  The benefit of even tension is purely theoretical as long as the wheel holds.  But then, the benefit of building to both sides of the rim may also be theoretical.  Offset Pug builds have been fine for years, and the offset is twice as great, about 10-13mm.  Both approaches to the Krampus wheel would be just fine.” 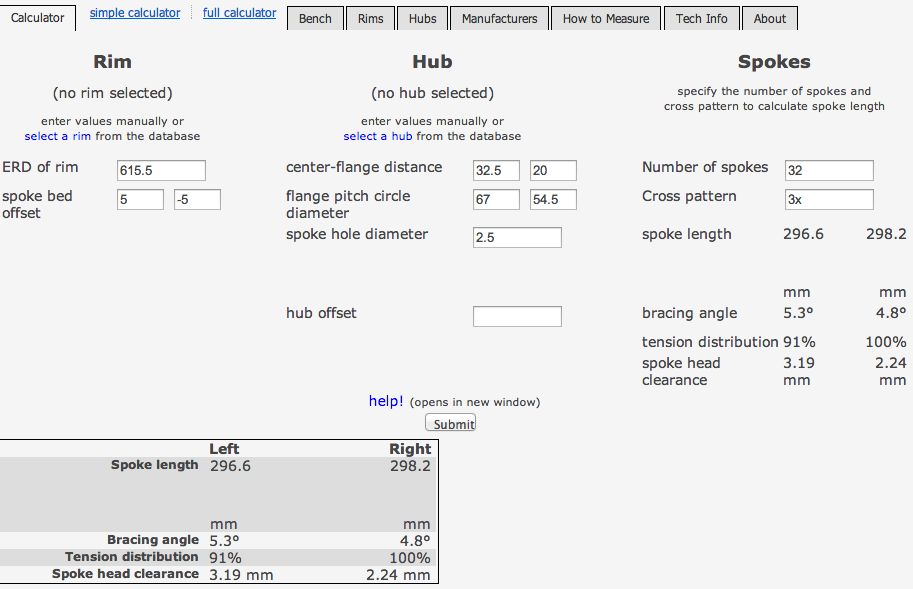 Spoke data for the Phil Wood/Rabbit Hole combo, built to one side of the rim.

13 thoughts on “The Big Wheel Keeps on Turning”