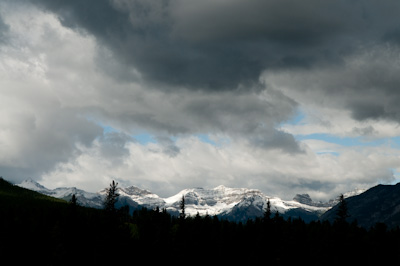 Just another Banff backdrop. And this one hasn't been photoshopped... 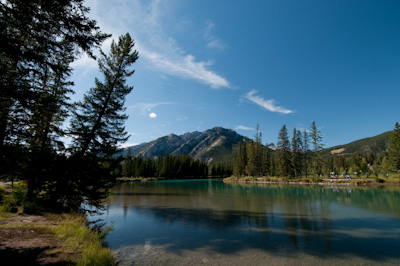 A couple of minutes down from the high street...

When I’m on the road, it’s important to set up a base here and there (and put down some mini roots), as it makes all the difference to staying motivated for the long journey ahead. It’s a chance to break things down, mentally, into bite size segments, as well as recharging the body batteries. I’ve been lucky so far, with wonderful layovers in Anchorage, Whitehorse, Hanes and Sitka.

After what’s felt like a long stretch of almost continuous riding – I haven’t had a day off the saddle in two weeks – I’m glad to be stopping now in Banff. It’s a pause for breath I’ve long looked forward as its symbolises the next major segment of this ride – the Great Divide. And it’s a break that has certainly lived up to my hopes. Especially as I’ve landed with Scott and Naomi, who have plied me with home cooking, showers and a bed, despite being in the throws of moving house. Scott, who rode the Great Divide Mountain Bike Route in 08, has taken time off work, he’s talked me through the ride, jotted down his various findings from last year, lent me a wad of maps, and generally been incredibly supportive. Heading off into the wilds alone can be a little nerve-racking at times, so gentle encouragement is really appreciated. 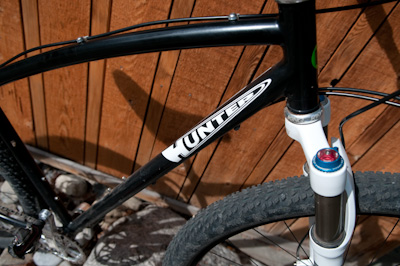 What my old housemate Hat hadn’t forewarned me of, and which came as even more of a pleasant surprise, is that Scott is also a fellow bike nerd. It wasn’t hard to intuit: as soon as I crossed the threshold of the apartment, I spotted a custom Rick Hunter 29er/tourer with a Paragon slider and curved top tube, lavishly adorned with a Rohloff hub, Hope discs, Groovy handlebars and a finishing kit befitting its pedigree – Thomson, White, Brooks et al. Very nice. Naomi’s all white Sycip commuter – as specced by Scott – leant casually up against the wall in the spare room, served only to reinforce this. Bikes are a way of connecting people, and long hours of discussion ensued… 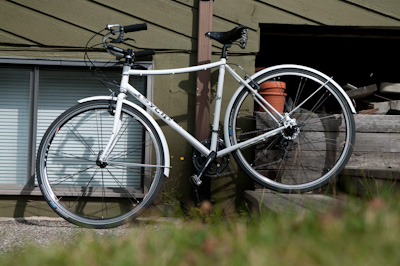 It didn’t take long before we were out riding one of Scott’s favourite singletrack loops the following day, a mix of flowy singletrack, cheeky woodland trails and grafty climbs set to sweeping Northern Rockies views.  These singletrack interludes to long days of tarmac pounding help give context to the passing days. As energetic as they may sound for what’s officially a ‘day off’, they’re undoubtedly cathartic; all thoughts and concerns dissolve away into the moment of negotiating that slender, shape-shifting thread of trail, unravelling before the blur of a front wheel. It’s all about being in the moment, intercut with blissful scenery and light. 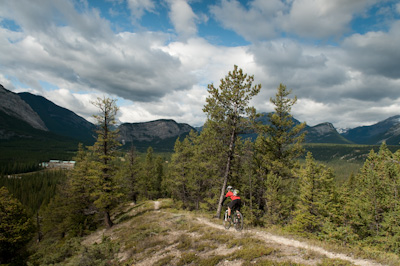 Like the best rides, this one started just five minutes down the road from Scott's front door. 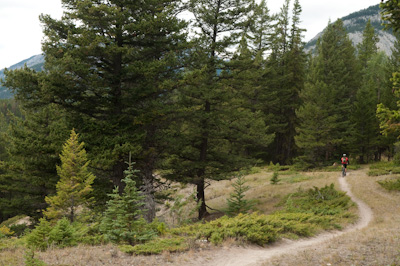 Singletrack: great for toning the mind. 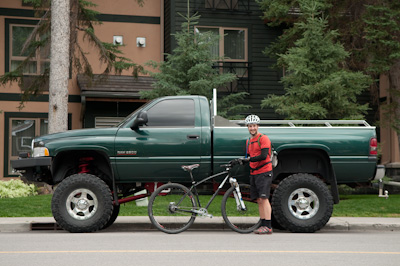 Scott, his Hunter, and not his truck. Scott's a potter and and a ceramic artist. His style isn't dainty; his place is full of beautifully minimal yet chunky and earthy cups and bowls. As an aside, I thought he had a definite hint of Edward Norton to him.

Spending time in Banff also gave me the chance to give my trusty steed, the Santos Travel Master, a belated and much needed service. I changed the oil on the Teutonicaly reliable Rohloff hub gear, cleaned and greased the chain, waxed the Brooks saddle lovingly and cast a critical eye over what I’m carrying – sending a pleasingly volumous bundle of old maps and books home. 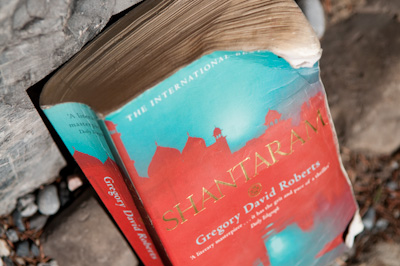 I've finally finished this wonderful, remarkable 900 page odyssey. It's tided me over from Alaska to Alberta. 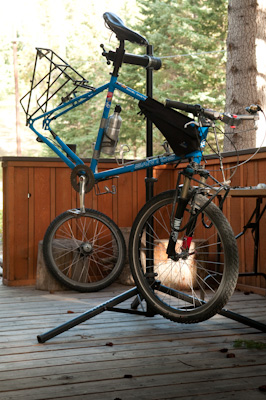 TLC for the Travel Master, at long last. 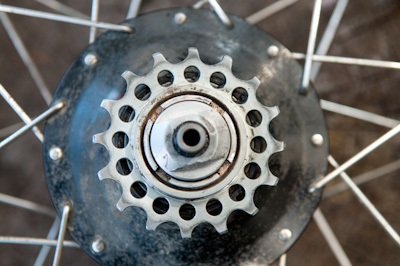 The reversible Rohloff cog is showing signs of wear. I'll need to flip it as soon as I can. On the tyre front, the Schwalbe Marathon Extremes (in an ample 2.25) are almost worn out; a second are set being sent to Bozeman. Although they're definitely not as tough as the benchmark Marathon XRs, they've survived 6000 kms of dirt track touring here and in France and Cambodia. They're way lighter and grippier too. 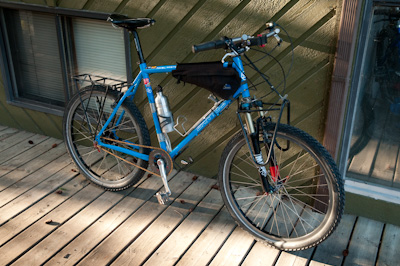 Shiny new once again. Out with the slicks and on with the fatties, as gravel roads and forest tracks lie ahead.

I’m definitely carrying more than I’d like, what with all the electronic gizmos – netbook, portable hardrive, lenses and all the rest. In terms of layout, I’m playing around with where everything lives, as I’m trying to keep my bar bag as light as possible – my heavy camera is now being stashed in a front pannier as it has a tendency to make handling squirrely – not ideal on fast, loose gravel descent . Future plans include one of Epic Eric’s custom frame bags and strapping my light but bulky sleeping bag below the handlebars. This way maybe I can streamline my setup to two panniers, and improve off road handling. 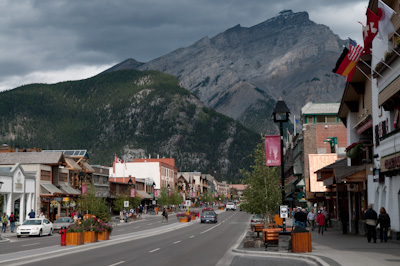 Just popping down to the high street.

Banff itself is a remarkable place whose beauty verges on the ridiculous. The glacial river that flows almost straight through its centre is, quite literally, crystal clear, with an undeniably fake turquoise tint. In fact, Banff feels like it’s been Photoshopped by someone overly generous with the Vivid slider. From almost every angle and almost every street corner, rockfaces rise sheer and craggy, luminous in the morning light. Likewise, everyone beams with the healthy glow of living in a mountain resort. I’m glad though to be experiencing this picture perfect town in this  ‘in between’ of seasons; after most of the summer tourists trawling its trinket shops that line the main street have migrated south, and before the well groomed skiing hordes descend come winter. 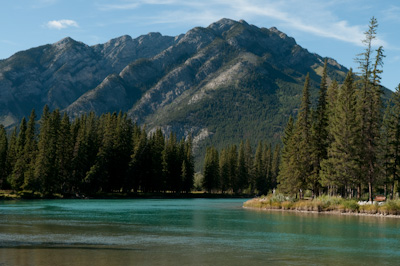 Banff. Who'se been messing around with Photoshop? 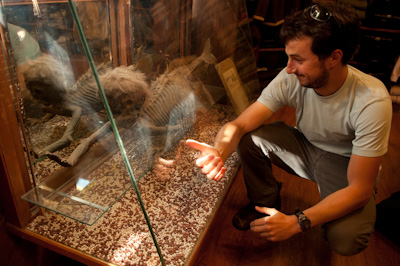 And a slice of its more obscure history. A perplexed Scott looks upon the Merman, gathering dust at the back of the Indian Trading Post. Legend has it this freaky curio was brought back from Bangkok in 1915 as an oddity to attract tourists.

Now it’s time to take to the Great Divide Mountain Bike Route, an almost uninterrupted 4500km stretch of forest tracks and gravel roads that will lead me right down to the Mexican border… 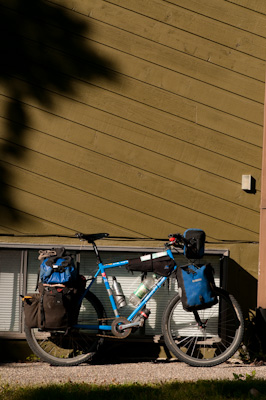 Ready to roll. The Great Divide Mountain Bike Route: bring it on!

4 thoughts on “Banff (has someone been messing around with Photoshop?)”