Erstwhile on While Out Riding…

So. After following in the dusty tracks of Butch and Sundance, we’ve arrived within a condor’s swoop of Volcán Uturuncu, the highest summit in Sur Lípez. (This, according to the local museum in Quetano Chico, means it’s a big player in the Incan world. After all, it’s the mountain peaks that ‘give meaning to the landscape and concentrate the forces of ukhu pacha.’ And – let’s not forget the fact that Uturuncu’s an active volcano, and thus considered to be a portal of ‘communication with the metaphysical.’) Bearing all this in mind, we’ve been advised to show the ‘Papa’ our full respect: following local Aymara tradition, Andi has duly exhaled puffs of tobacco smoke towards the seven anointed volcanoes and mountains in the area, in an attempt to appease the various forces at play.

We’re ready… Excess gear has been stowed in our guesthouse and our framebags are now full to bursting with sugary supplies, procured at the local hole-in-the-wall store; a 14oz bag of synthetic-style kids cookies is bolstered with innumerable cheap, papery chocolate wafer bars that fill every nook and cranny. We’ve set the alarm clock for the unearthly hour of 5am, long before the sun has a chance to even begin defrosting frigid bodies.

But when I open the door of our hostel, bleary eyed in the morning, I see immediately that our ceremony and preparations have come to nothing. Outside, the plaza lies hidden by a wintery carpet of snow… Clearly, Papa Uturuncu is calling the shots, and could well be saying: Not today, folks.

But Papa… you’re forgetting that we have Fat Bikes! Devourers of All Terrain! Then we ponder the implication of ploughing through snow at close to 6000m… and seeing as Uturuncu remains veiled behind a dark and inky blot come morning, decide reluctantly to call our summit ride off. We mope around our shoebox of a room. We ponder the intricacies of the local weather system. We debate the time it takes snow to melt at altitude. Should we stay? Should we flee? Fingers are kept crossed for more auspicious conditions.

Thankfully, strong winds oust lingering cloud cover, and by nightfall, the stars are glimmering once more. Conditions are looking as promising; the small mountain of biscuits we’ve munched through that day are duly replaced, and we retire to huddle round the simple sheet metal stove, carbo loading with a hearty bowl of llama pasta.

Then, it’s Take 2 the following morning. We leave just before sunrise, our tyres scrunching over frozen stream crossings. We pass a herd of llama, whose heads swivel like synchronised periscopes over stone wall enclosures. It’s -11c and I envy their fluff. The tips of my fingers are stinging, but I know that as soon as I begin the climb in earnest, blood will course through my body and I’ll be shedding the layers in which I’m bundled. Up and up we go, tyres bouncing over corrugation, scrabbling for grip over rock and sand. Having spent the last few weeks at 4000m or more in elevation, so I’m feeling good. My gameplan is simple: to keep my breath under control. Otherwise, slow right down, stop, sip water and recompose. Soon, we’ve hit the 5000m mark. Andy calls it a day a couple of hundred metres later when a headache kicks in – having recently flown in from Germany, he’s had less time to acclimatise than Miguel and I.

Pushing on, my tactic proves effective until a few hundred metres further up, at which point even the smallest burst of power – dodging an errant rock, for instance, or balancing through a patch of snow – has me gasping for each and every breath. So we pause, and ponder the last 350m of climbing ahead. Uturuncu is looking as far away as it ever has. Until now, we’ve tenaciously ridden every metre, but now the road morphs into a sandy, snowy quagmire that’s so steep we’re off our bikes, shoes digging deep for grip, heads bowed over bars, eyed squinting for clues of where the ‘road’ will lead us next…

The metres ever-so-slowly count down, as time-warped minutes pass by. 2:1, Ride: Break, that would be about the ratio. Connecting back with an improved surface, we pedal on, with renewed energy and enthusiasm. Then, wafts of acrid sulphur clouds, wafting out of pores in the earth, make breathing harder still, until we can see the col at last. Like a theatrical, dry-ice finale, we ride through a corridor of fumaroles – gas vents – until finally, lightheaded, we’ve reached our highest rideable point: 5777m in elevation, or close to 19,000ft. Unsure that we’ll have time hike the last 250m to the actual summit, I bask instead in the knowledge that we’ve just ridden one of the highest roads in the world.

At the top, I crumble one of my favourite cookies into the blustery air: a thanks to Papa Uturuncu, and an offering for safe passage back down the volcano. And Papa complies. The descent turns out to be one of the best of the trip so far, a rip roaring ride over rock, snow and sand… one that has me laughing out aloud, beaming in heady, high altitude, fatbike happiness.

To get to Uturuncu, we followed the Pikes’s South Lipez route (we’d already ridden the classic Lagunas previously). Then we looped back to Ayuni more directly: Quetena Chico – Kolpina K (2 days), hopping on a 3 hour bus to Ayuni (daily, 4pm, 20 Bol) from there.

If you would like to keep up with where I am between tardy blog entries, I keep my While Out Riding Facebook page regularly updated – along with posting extra photos and regular gear ponderings. You can find it here. Occasionally, I pop some pictures up on Instagram too. 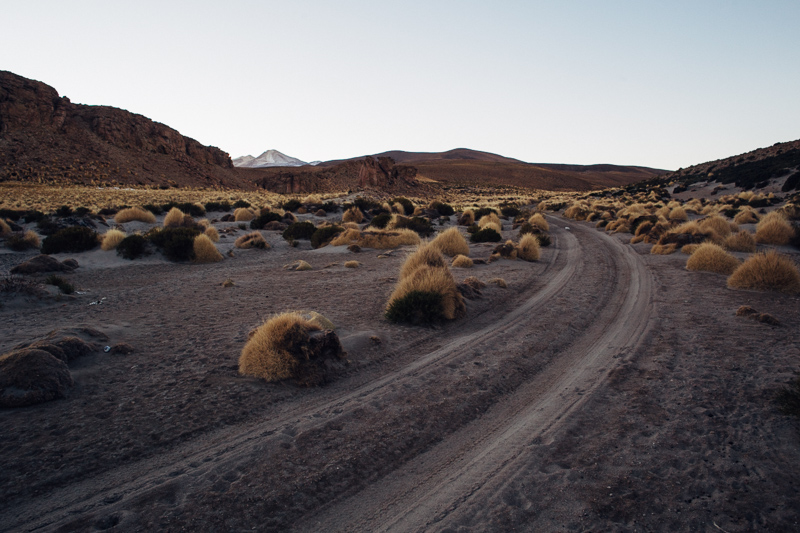 That would be the one… 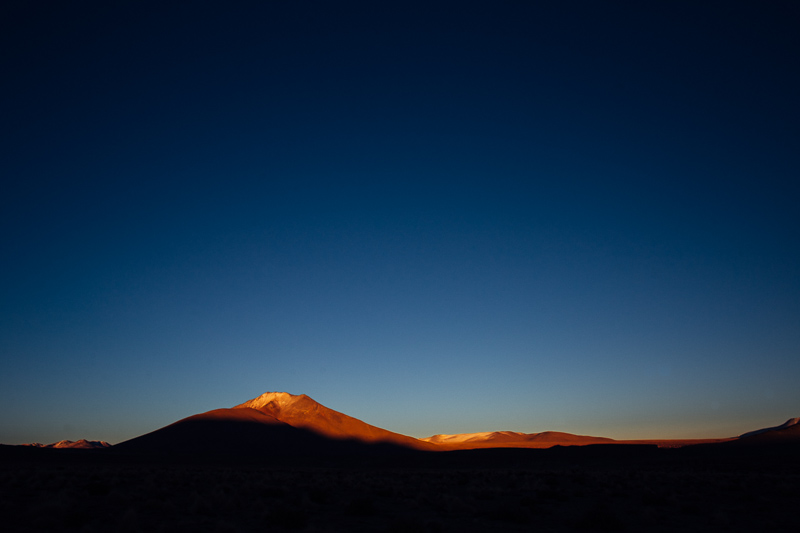 Come on Inti! Still a ways away from warming our bones… 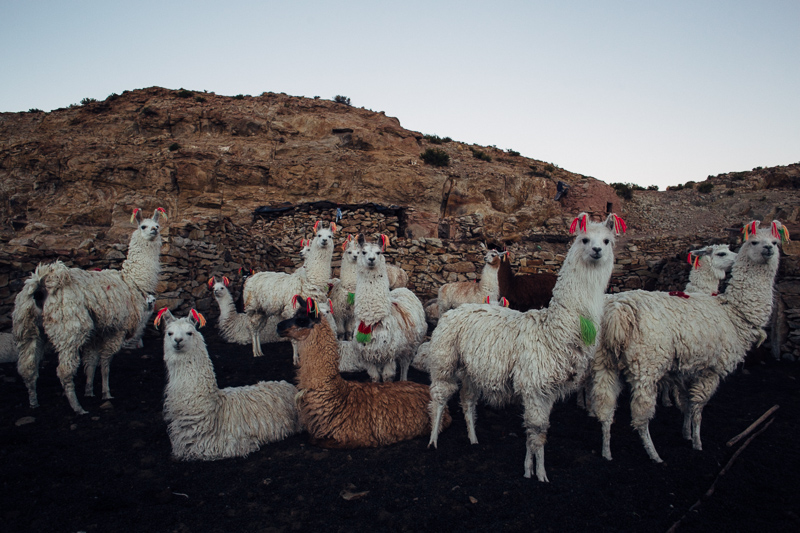 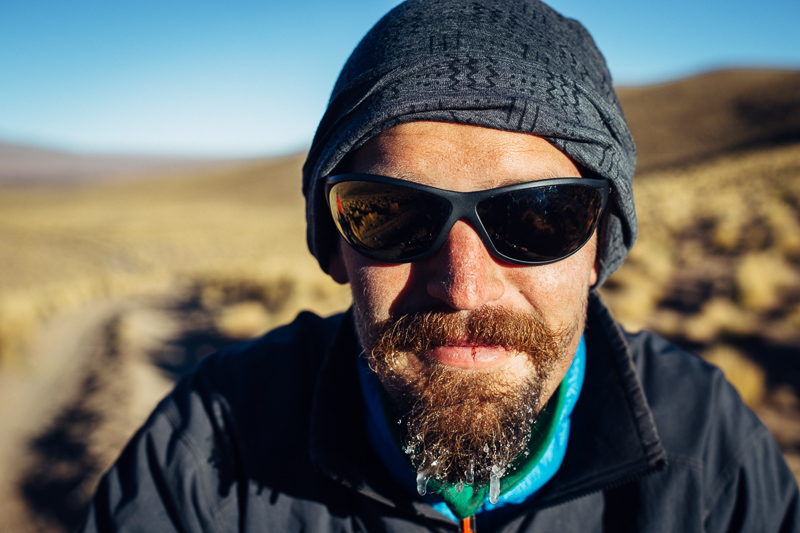 How cold? Enough to freeze Andi’s well groomed goatie, with a sun strong enough to frazzle his nose… 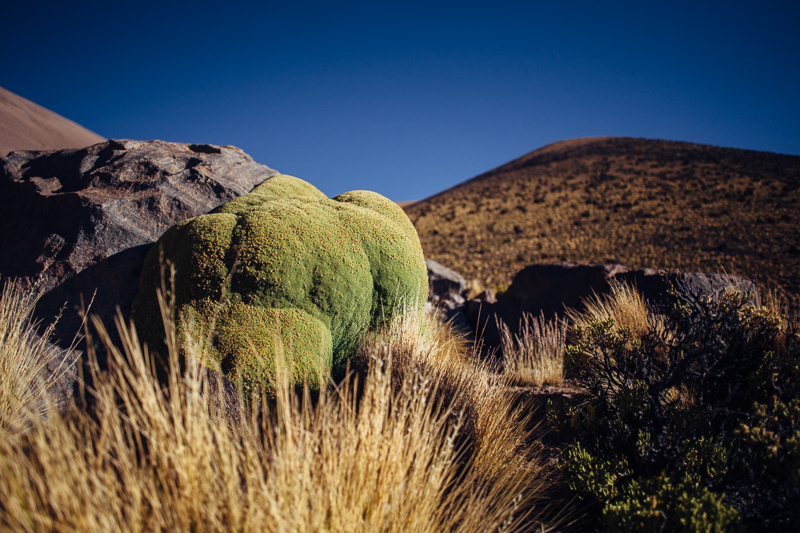 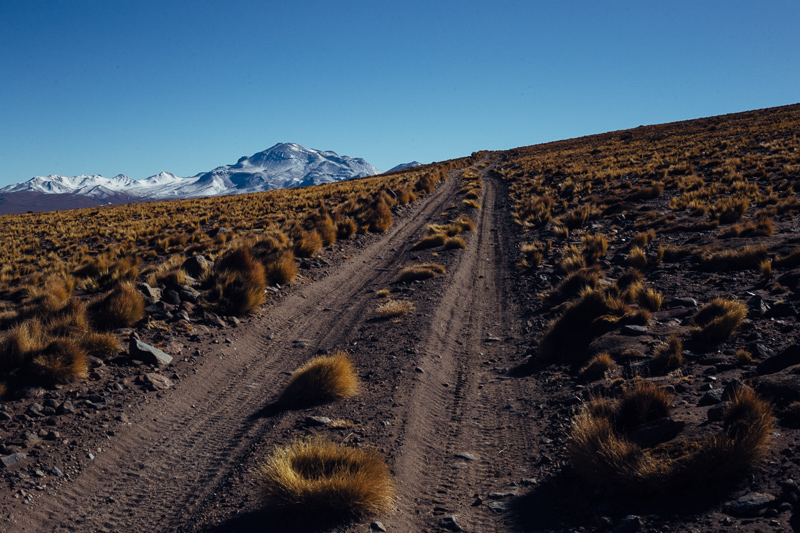 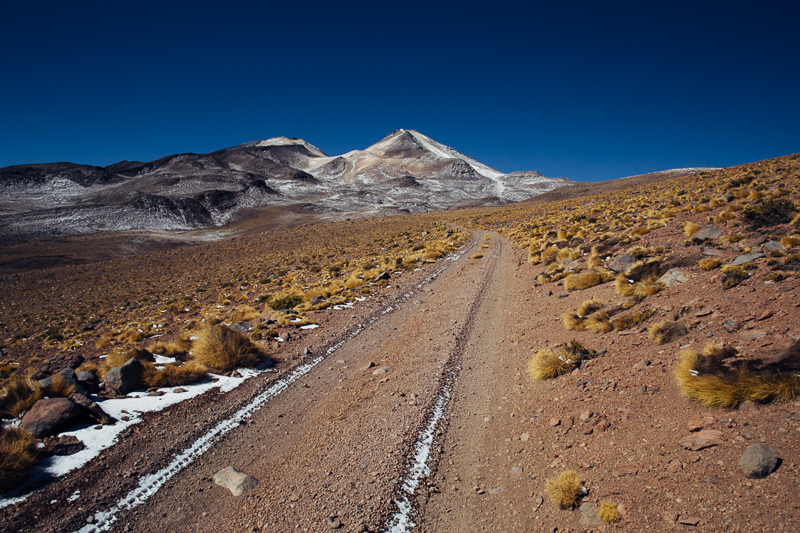 Ever so slightly closer, with every pedal stroke. 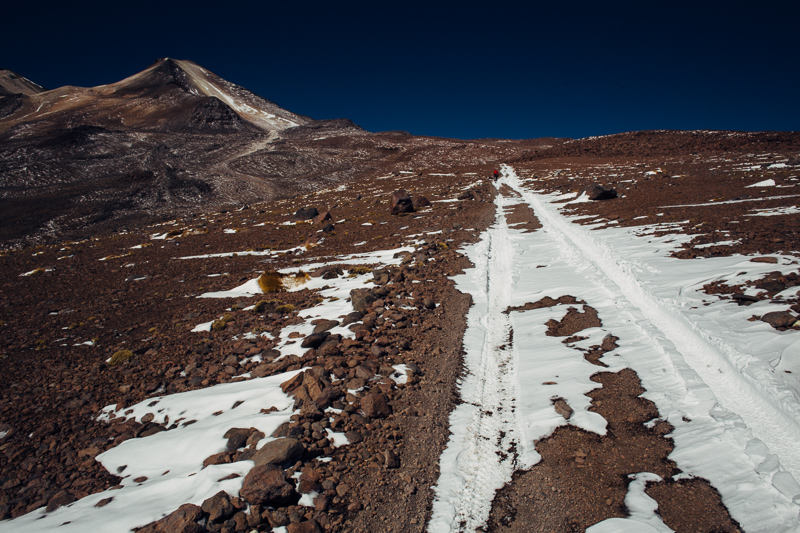 Even small drifts of snow add significantly to the challenge… when you’re up at 5500m. 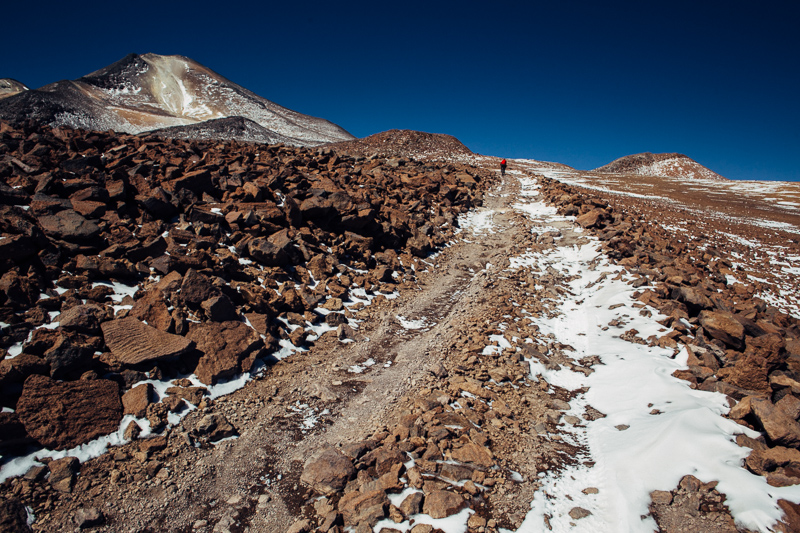 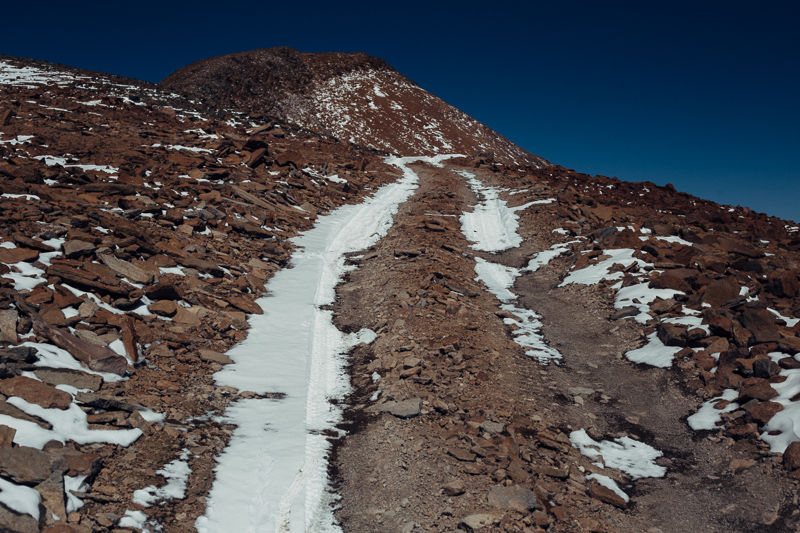 Are roads allowed to be this steep, this high? 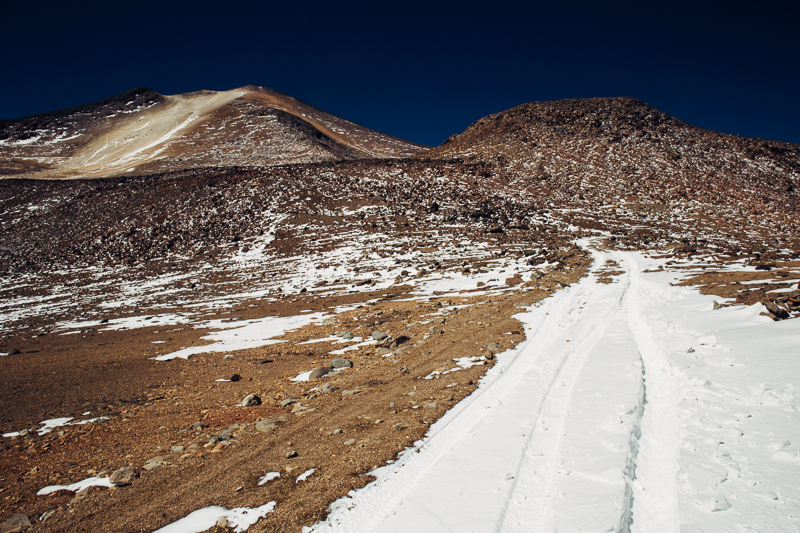 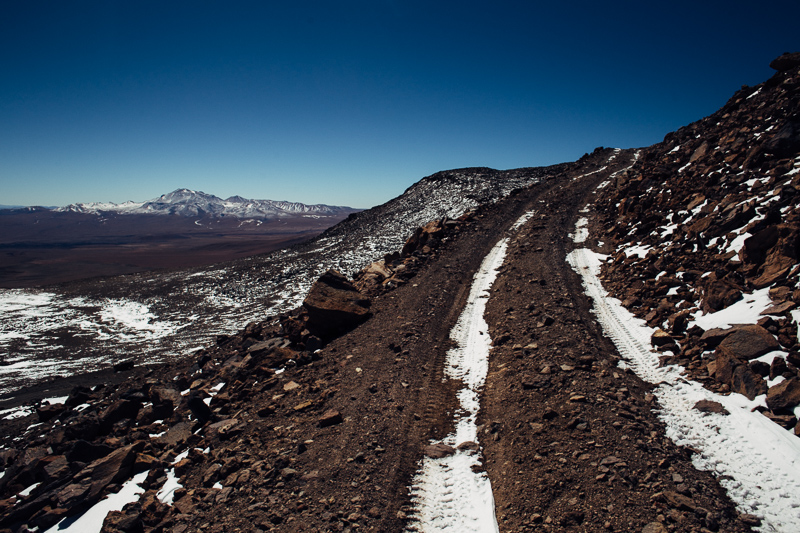 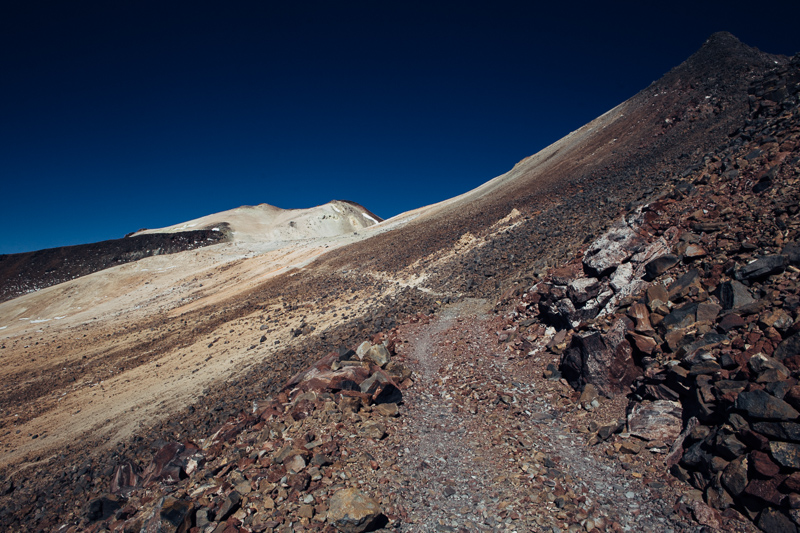 At long last… the col! 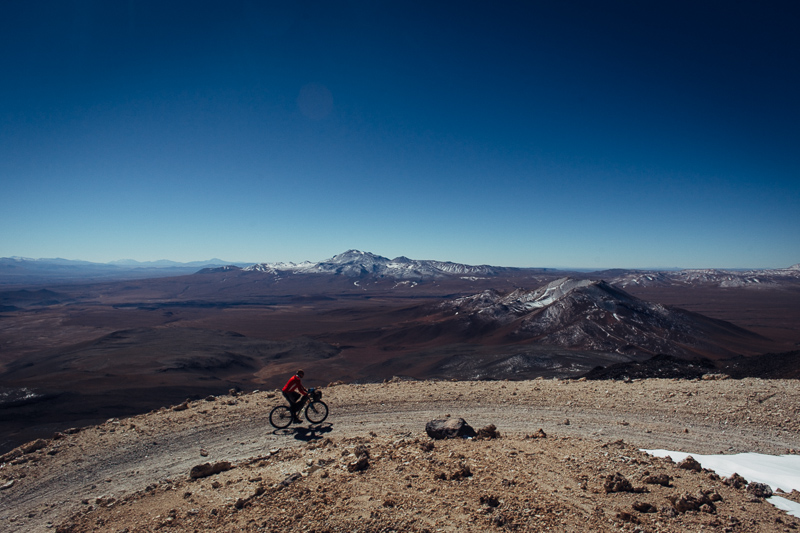 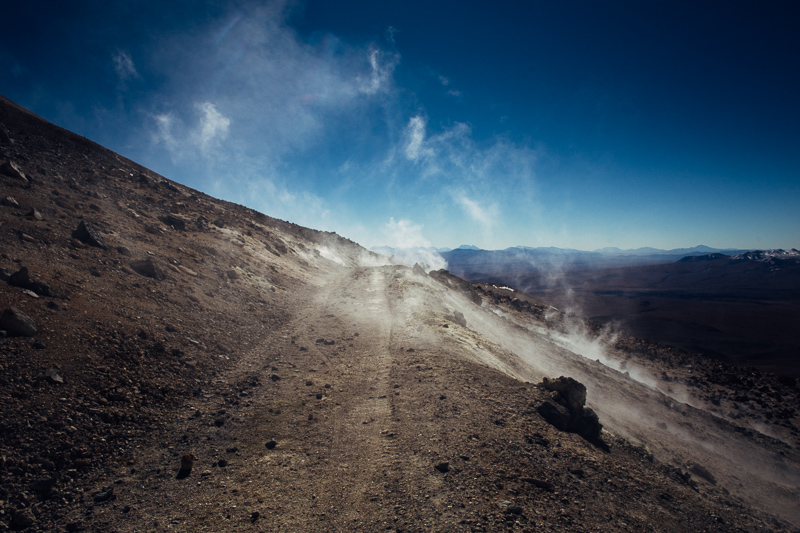 Before the dry ice finale…. 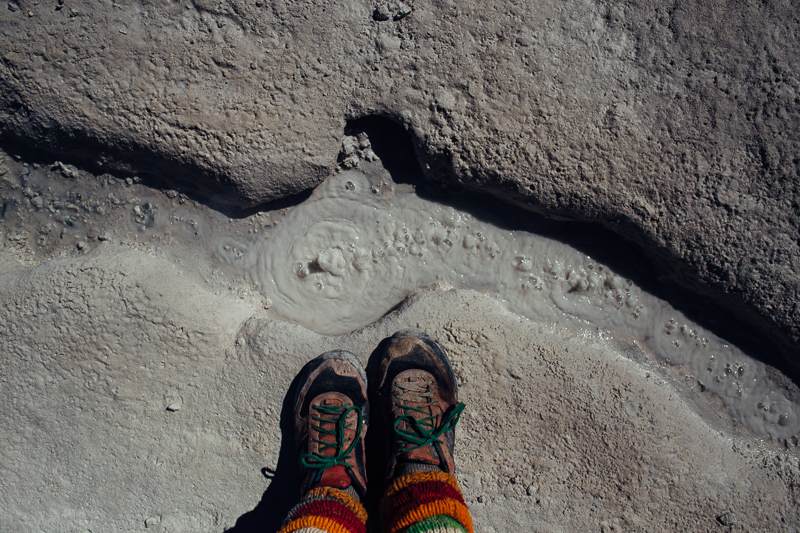 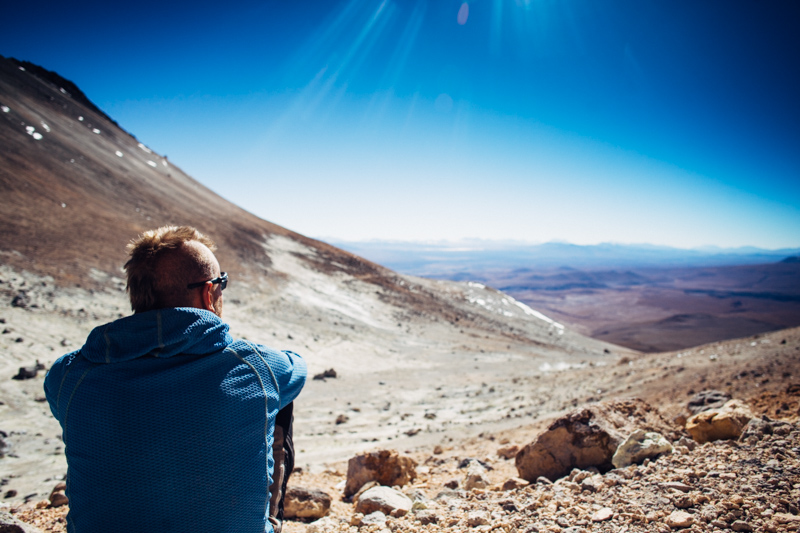 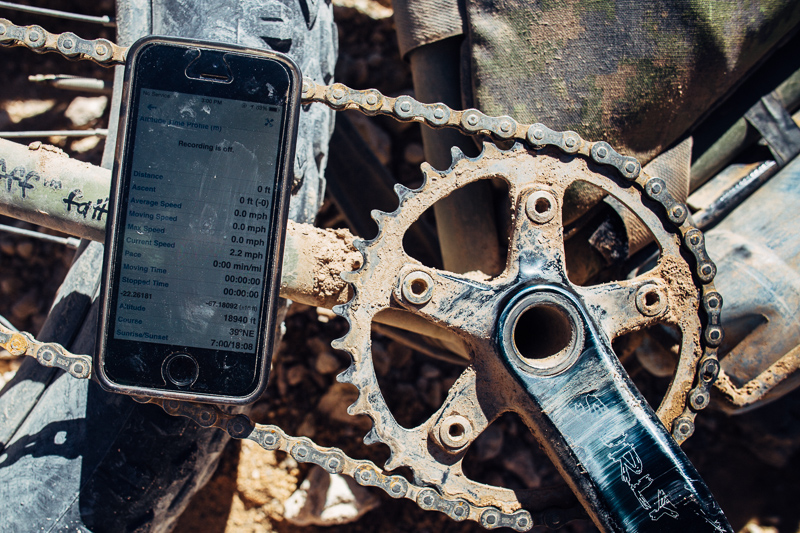 18,940ft!!! Papa Uturuncu has truly tested us. This is a ride that requires strength… fortitude… and above all, patience… 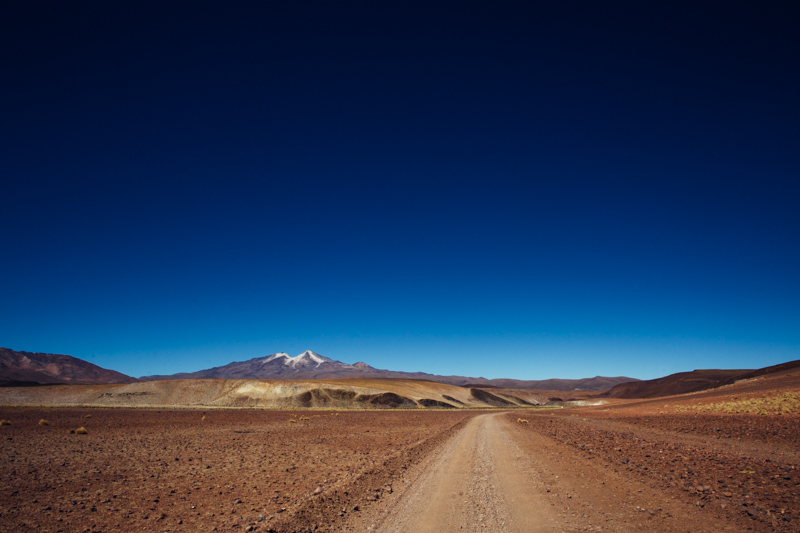 Then,it’s back to Ayuni we go. Chau, Papa. 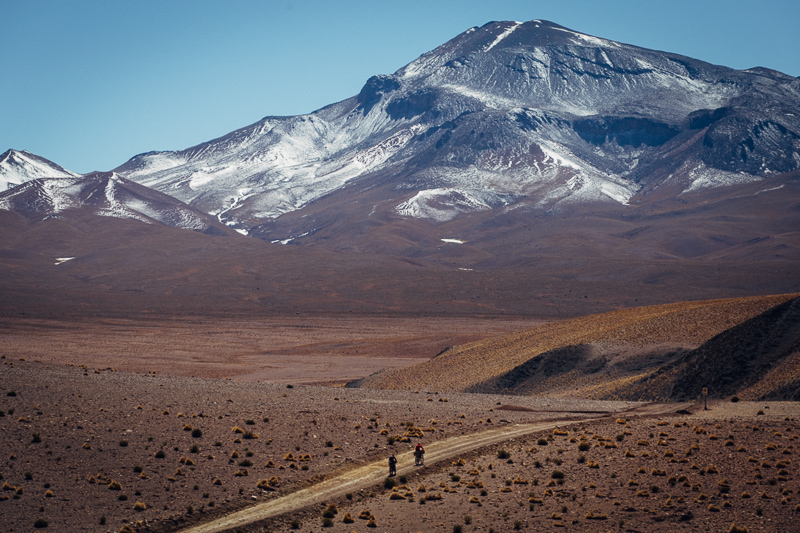 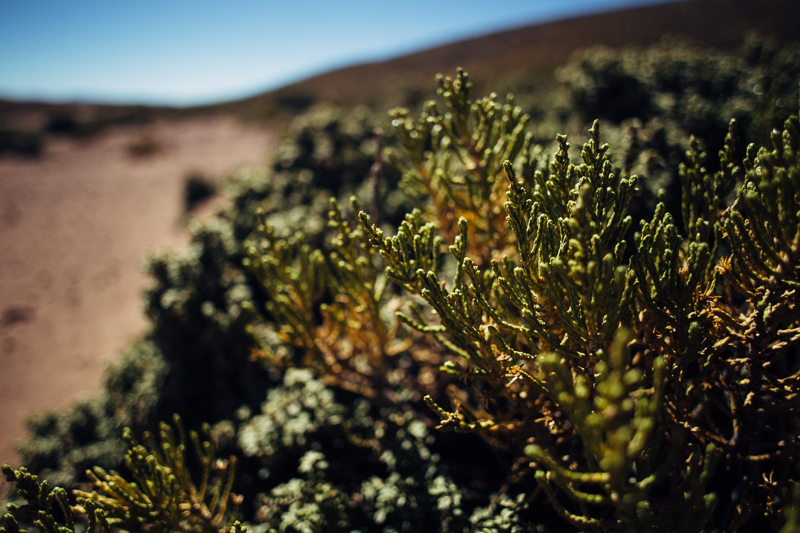 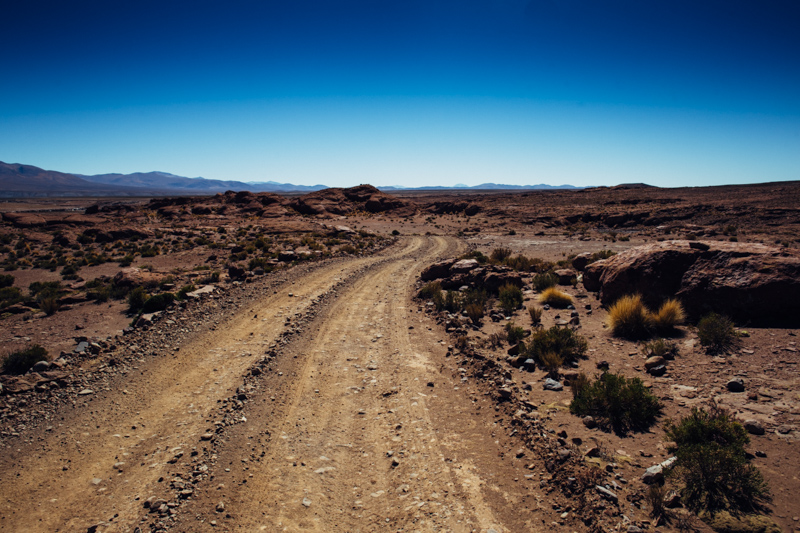 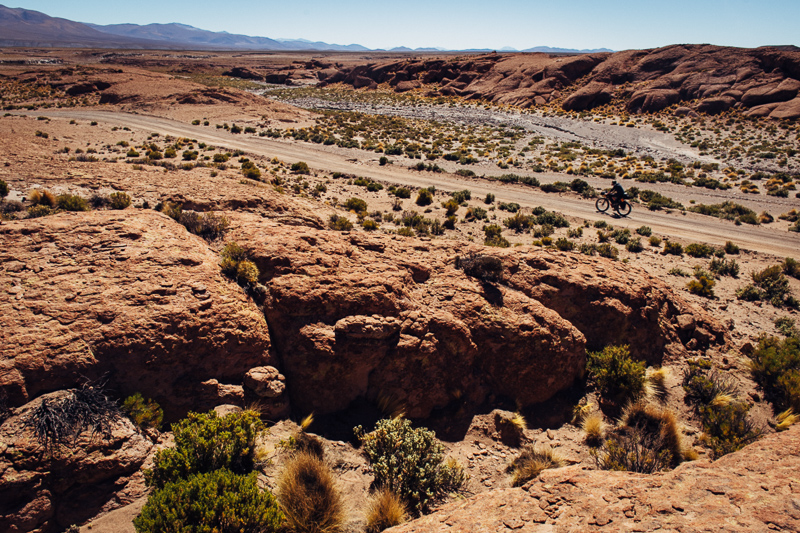 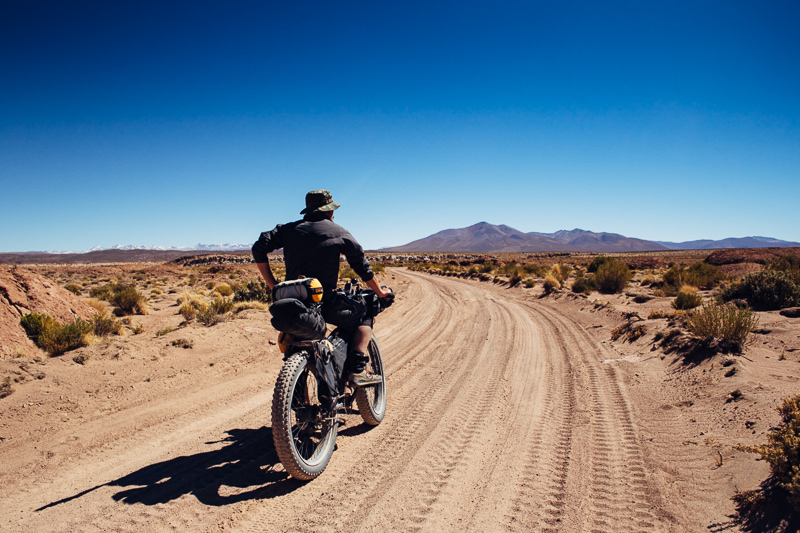 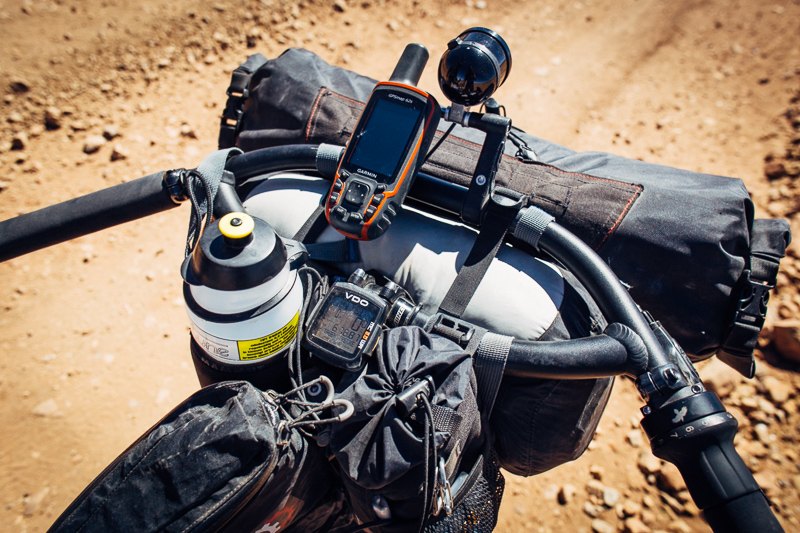 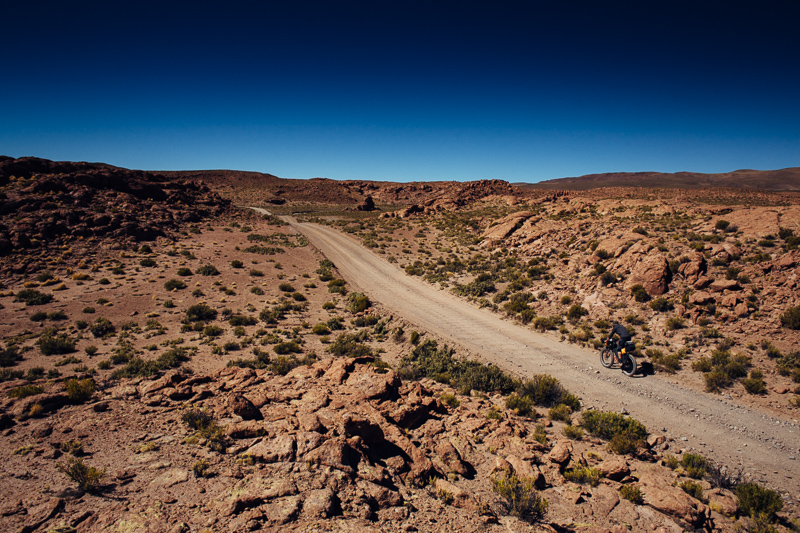 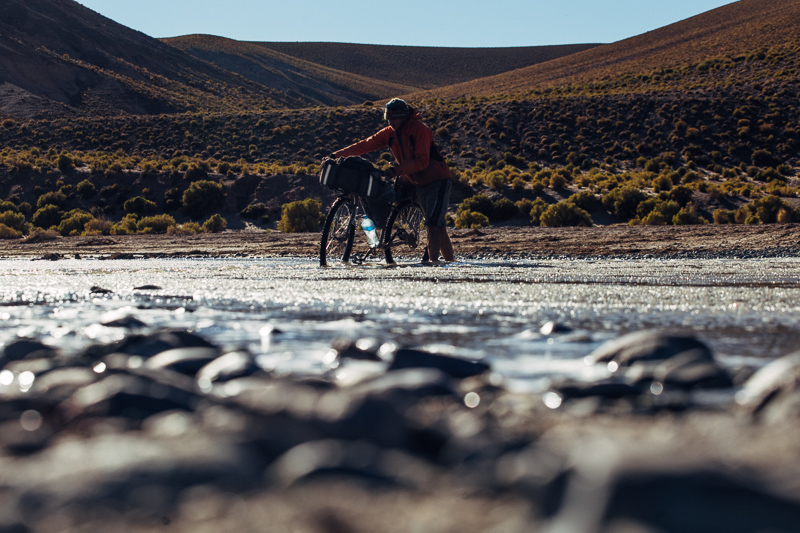 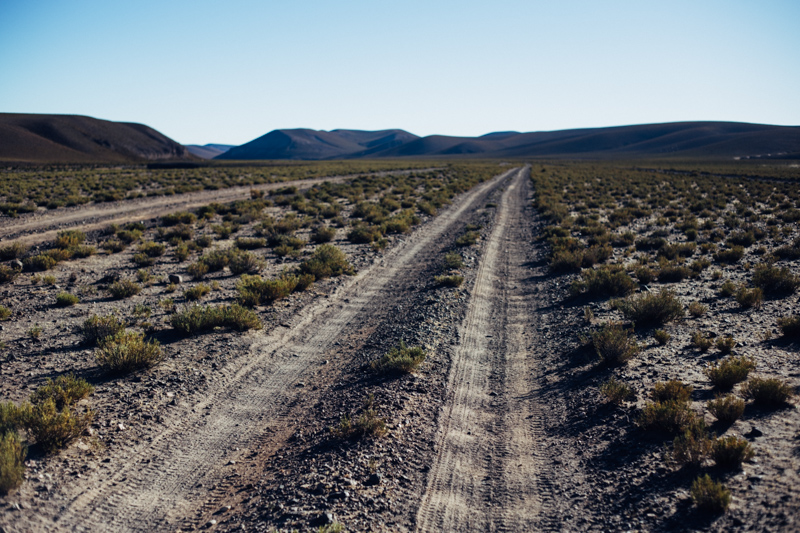 My teeth love this kind of surface. 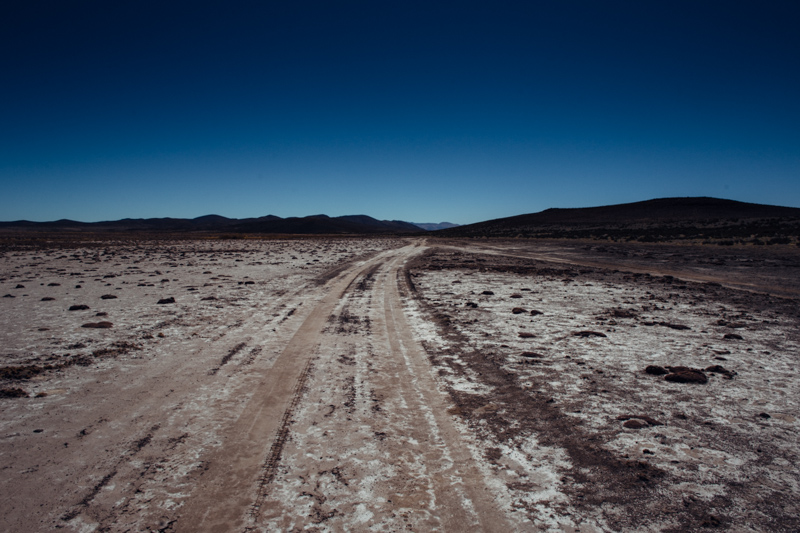 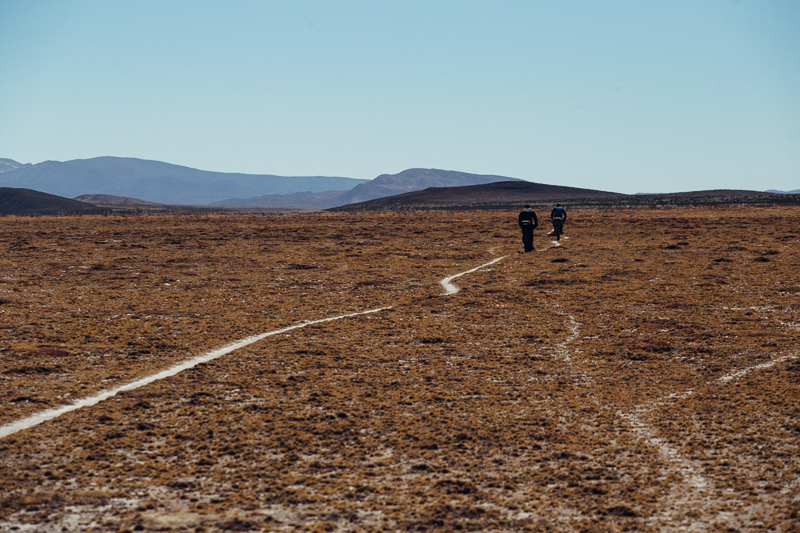 Always on the lookout for singletrack…

13 thoughts on “Appeasing Papa Uturuncu… and pedalling to 5777m.”