I’ve long yearned to ride the Kokopelli Trail, a challenging 142 mile dirt track linking Fruita, in Colorado, to Moab in Utah. Here’s how it went. 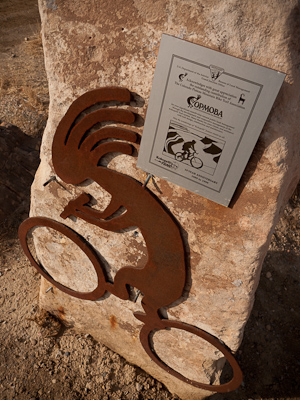 The trail starts a few miles out of Fruita, in Loma. Kokopelli, the cheeky flute-playing, rasta-looking character, is actually a Native American fertility deity. 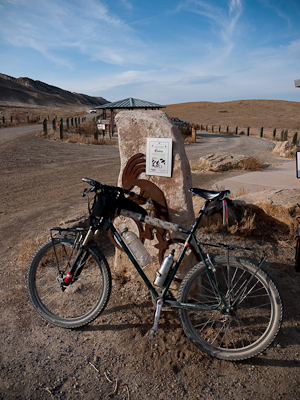 The first dozen miles - following Mary's Loop - are pretty full on and technical, so I stripped back the bike to really enjoy it. Kindly Skip had offered to shuttle my kit to an arranged point (a collection of rocks 22 miles into the ride), and Timoni and Max from Over The Edge had offered to join me for this first section. We didn't leave until 2.30pm, so the race was on to get to my tent before dark! 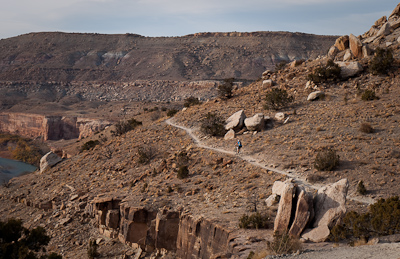 The trail unravelled high above the Colorado River. Fast and flowy singletrack, mined with rock gardens and awkward steps, wrapped around sheer sandstone ledges. This was superb riding. 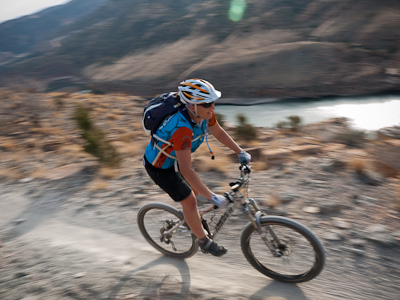 Here's Timoni enjoying the trail. There wasn't much time to hang around and chit chat, as I needed to make it to the rest of my kit before sundown... 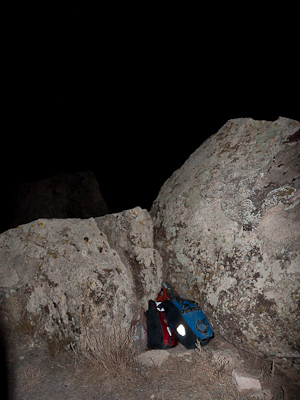 Which I didn't manage to do... Luckily, after some scrabbling around in the dark, I found the rocks Skip had stashed them behind. Phew! 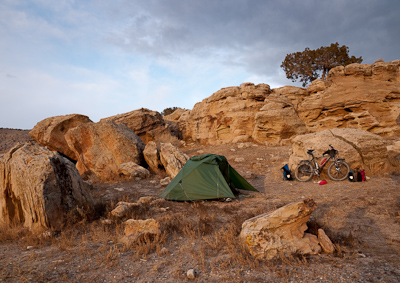 The next morning, I loaded up the bike, keen to take to the trail while the weather was good. 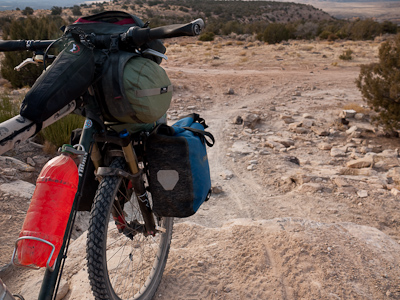 Off I go, powered by neon rocket juice. Riding a fully loaded bike down big steps added to the fun... 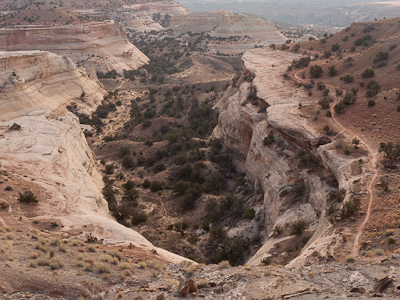 Especially when they teetered round drop-offs like this. What a view! This was fast turning out to be one of the best trails I'd ever ridden. 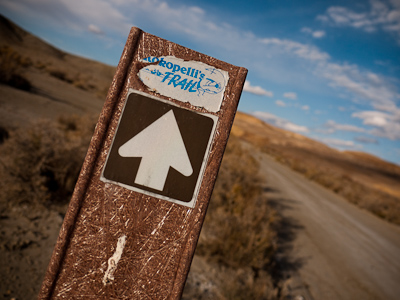 What's more, it was really well signposted. Being so late in the season, I didn't see another soul. 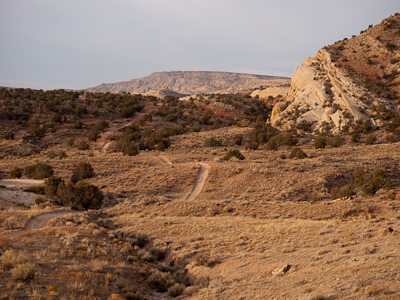 At times the path was clear cut, undulating across the desert. 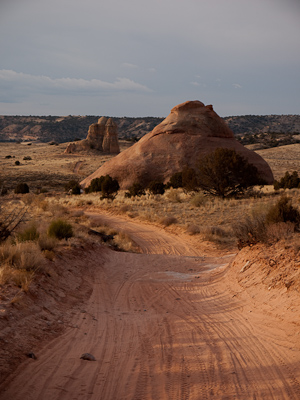 At others, it was broad and sandy, doing its best to gulp down tyres or throw me off the bike. 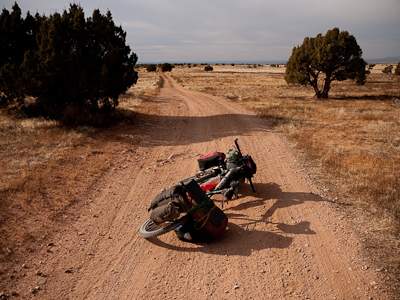 Some stretches were fast and hardpacked. 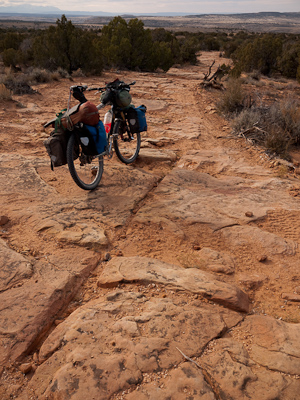 I'd sent a bunch of kit ahead to Moab, like my netbook and battery chargers. Which made slaby terrain like this much more do-able. 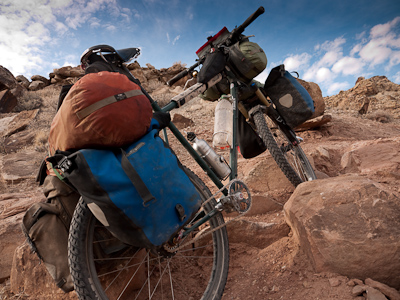 And hike and bikes like this a bit more bearable... 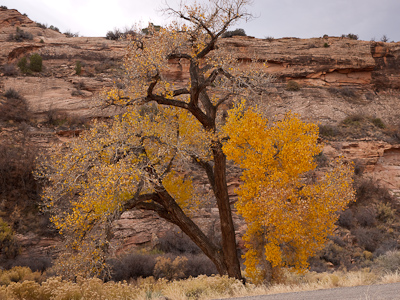 Finally, after a long day in the saddle, I made it to Dewy Bridge, just over half way to Moab. 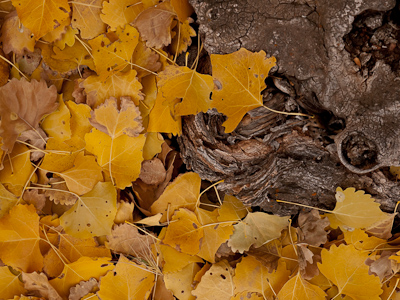 The weather was turning, leaves were falling, and a storm was due in. Uh oh. 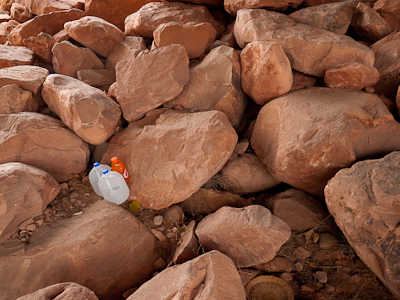 The Kokopelli Trail is all but parched dry, so Simon from Western Adventures had left me a stash of water and an isotonic drink to tide me over the night. 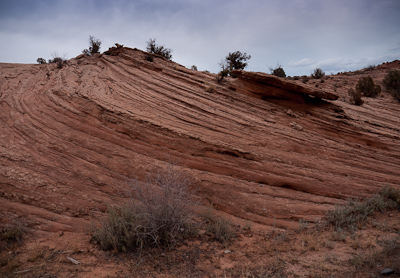 There was just time to find a camping spot behind some rocks and hunker down in the tent before the light dropped. 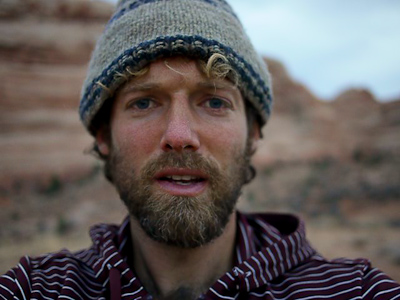 Beard progress. It's been cut back, so is looking a little subdued and trim at the moment. 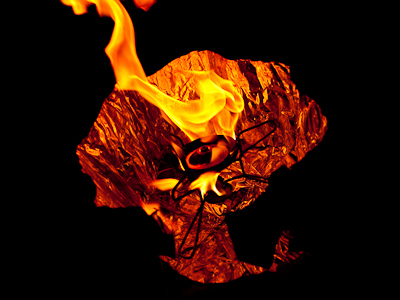 Long distance touring, like everything in life, is made up of a series of repeated events. Like a bookend to the day, I like the ritual of priming the stove in preparation for the evening feast. 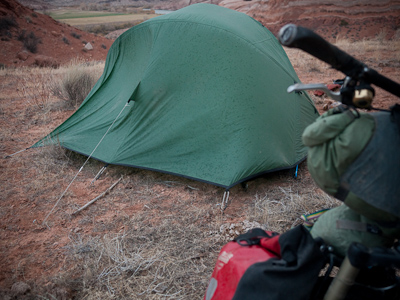 The night passed smoothly enough, but by morning, the winds were kicking up. 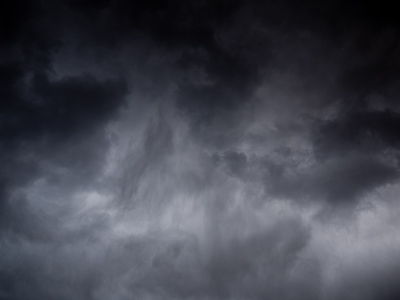 And the skies weren't looking too promising either... 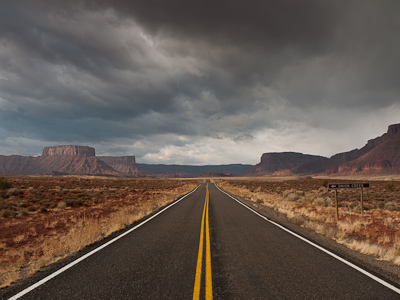 Then it started to rain, hard. So knowing the trail ascended to 8500ft in elevation, and with a forecast of snow added into the mix, I made the difficult decision to bail, heading to Moab by road. 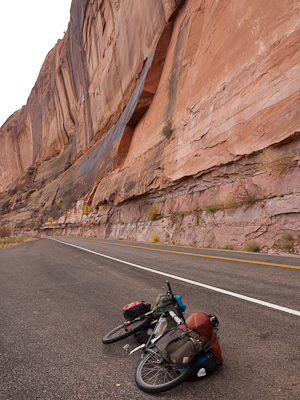 As I neared the town, a red sandstone wall rose sheer and dramatically above me. 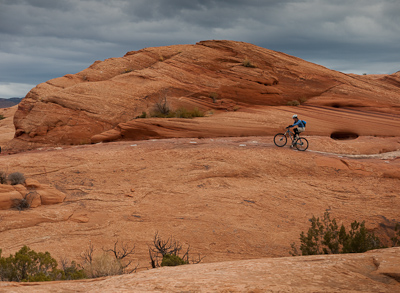 To make up for the disappointment of cutting short the Kokopelli Trail, I headed straight off to ride the famous Slickrock Trail. To any mountain biker worth his salt, it would be sacrilege not to ride it. 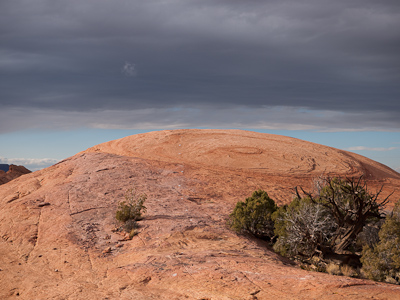 It didn't disappoint. In fact, I'd never seen anything like it. These eroded sea beds looked more like a bizarre, polished Marscape. 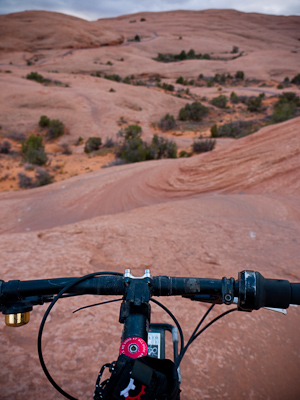 It's hard to convey how unique this trail is in pictures, as they make it look decidedly tame. White markers painted on the rock tell you, literally, where to ride, guiding you up and down unfeasible steep gradients, along worrying sheer cambers. Despite the name, the traction on its sandpaper-like surface was phenomenal. I ran out of bottle way before I ran out of grip... 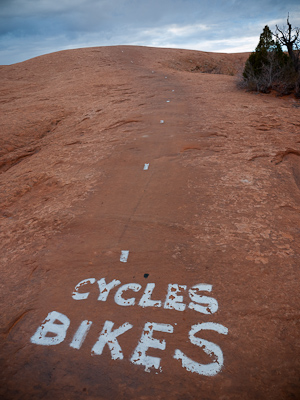 Don't forget to follow those white dotted lines, or 1/ you'll get lost, and 2/ you're liable to drop right off the map into the chasms below...

I was surprised to be see jeeps crawling their way up and down the rock too, ever so slowly. In fact, the original loop was first laid out for four wheelers back in the late sixties, and they've long rubbed shoulders with bikers. 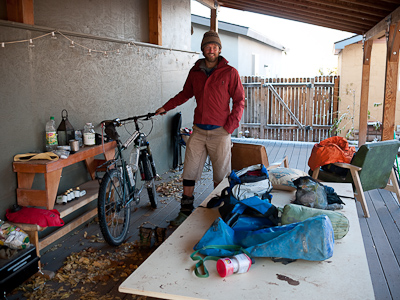 Back in Moab, I was invited in by the local bike community. Kindly endurance biker Cullen, who won the Great Divide Race this year, offered to let me sleep on his porch. It poured and poured that night. As sorry as I was not to complete the Kokopelli Trail, I was kind of glad not to be camped out in the high mountains. Definitely one I'll be back for...

1 thought on “The Kokopelli Trail”