It’s something of a relief to have figured out a plan amist all the options, which have been clouding my mind of late. And a fine one it is too, I think.

Although I’ve actually (strangely enough) revelled in everything the recent snows have brought with them, I’ve decided, in light of the onset of an early winter, to veer off the Great Divide Mountain Bike Route, and make my own way south. It was a tough decision, as I’ve loved almost every mile of this epic route so far; the quiet solitude, the complete remoteness, the oddball towns. In a way, this whole trip hinged around a desire to ride this route; it’s hard to accept change and let go of things sometimes. 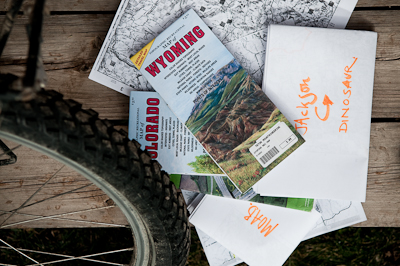 I do enjoy getting my nose stuck into a good map; anticipation is the beginning of the journey. Thanks Evan, and Keith at Teton Mountaineering, for the route planning advice.

But at least riding these gravel roads the last month has opened up a whole new world of backwater America to me, and it’s one I want to keep exploring. A conversation with David’s neighbour Evan rekindled my ideas of heading to Moab, by reminding me of the Kokopelli Trail. Then, the kind folks at Teton Mountaineering poured over map after map with me, and together we wove together a network of gravel and backroads which will deposit me right down at Fruita, on the edge of Colorado – a renowned mountain biking locale. Places along the way include Alpine Junction, La Barge, the Flaming Gorge, Jensen, Dinosaur and Loma, via Baxter Pass, if it’s doable.

From there, I’ll pick up the Kokopelli Trail, a challenging off road route I’ve long hankered to ride, which will link me to another mtb mecca: Moab, in Utah. Then, (somehow) I’ll weave my way back down to New Mexico, again on backroads where I can, and pick up the Great Divide Route once more to the border.

I’m sure to miss the phenomenally detailed route maps I’ve become used to. Many of these forest tracks I’ll now be following south should be just as remote, so, taking a leaf from the Adventure Cycling Association, I’ve spent the morning at Staples compiling detailed topographical state maps from DeLorme, and highlighting where I’m going. I’d thought of laminating them for that final professional touch, but a zip lock bag will have to do. 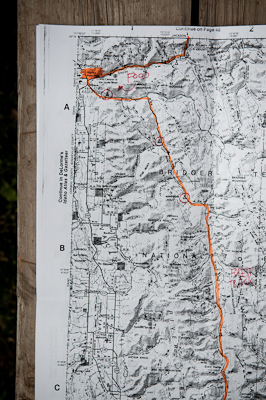 Jackson seems mellower and less austentacious than I imagined, though I guess ski season – and the money that comes with it – has yet to kick in. The main square has a resort feel to it, and many of the stores are clad in the veneer of the log cabin or frontier town look. The fruit at the local supermarket seems perhaps a little more buffed and shiny than normal, and there’s a rather grand fireplace there too. But apart from that, Jackson seems to have kept to its roots as a beguiling, laid back mountain town, its roads populated by Subarus and pickup trucks loaded with the mountain person’s paraphernalia of skis/kayaks/bikes. The backstreets are quiet, with simple and elegant contemporary houses interspersed with old, wonky wooden buildings.