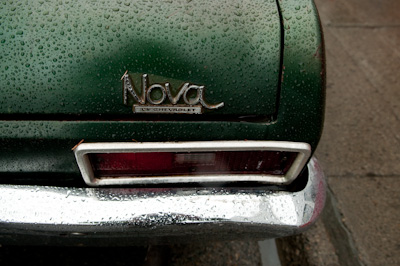 One of the old cars still bumbling around rainy Haines..

After our relatively brief forray in the Yukon, we’re back in AK, Alaska. For now at least – within a week, I’ll be in Canada once more, heading to Banff, while Dan returns to his studies in Bozeman. Over the next few days we’ll be sailing our way down the western sliver of Alaska, a watery, mountainous passage, home to migrating whales and small communities that can only be connected by ferries – the Alaska Marine Highway – or by air. 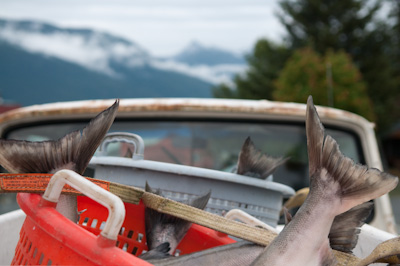 First stop is Haines, a funky settlement with an appealingly scruffy and lived-in vibe, lined with quirky, storm-faded wooden buildings and fronted with its own little harbour. It definitely feels like Alaska. The rust-streaked, beaten-up pickups are back, debris is piled high in the yards, and everyone seems suitably bearded or outdoorsy or weathered. Overcast skies and drizzle has denied us of seeing it at its best, though even through the veil of mist, the vast baby blue glaciers that bulldoze their way gently between the mountains exude silent drama.

We’re also been invited in a great little home too, friends of Sitka-based Alexei who I met cycling in Bristol. Marnie is from Southern California but moved way up north to work as a physio four years ago; she’s plied us with fresh vegetables from the garden, and even given us a jar of blueberry jam and some packs of freeze dried salmon for the days ahead (the gadget to do this is pretty nifty, effectively a kind of food laminater).

There’s a cool community here – I’ve managed to get a much needed yoga class in, and this evening a bunch of her friends came round for a delicious harvest feast of salads and pies and tortellini and bakes. 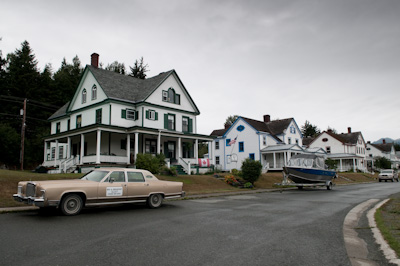 Haines is squeezed in on a peninsula between the Chilkat and Chilkoot inlets, and was once an important stopping point on the pack route to mining areas around Whitehorse. These wooden buildings front a grassy common that is known as the Fort, and were home to Alaska's first permanent army back in 1903.

It’s certainly much more my scene that the Gold Rush-themed Disneyworld of Scagway, where several cruise ships the size of small towns muscle in each day, looming surreally on the skyline, vying for as much attention as the glaciers themselves. 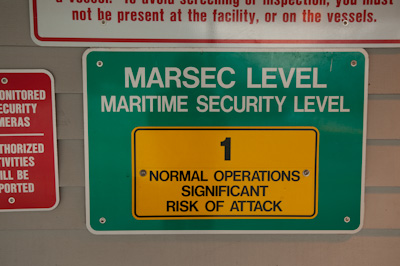 Who would have thought that it of remote little Skagway, population 862? 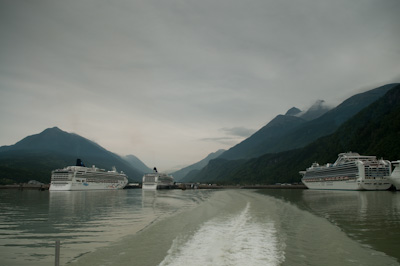 Perhaps we'd got it all wrong... Perhaps these gargantuan floating buildings were the way to travel...

The descent to Skagway is a good one though – fifteen miles long, a smooth tarmac road wraps tightly round the mountains as it spirals ever further into this dangly finger of the States. Just watch out for tour buses, which seem to abruptly materialise in droves on the Canadian border, shuttling around armies of cruise ship tourists like a military deployment. 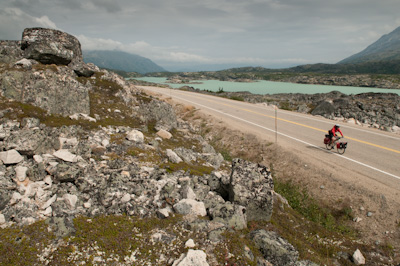 Crossing the border, again! This time back into Alaska. 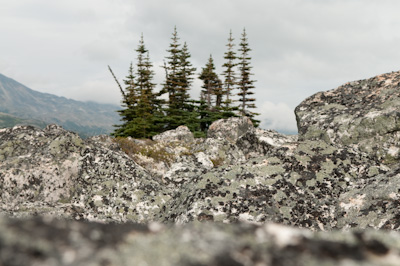 The odd tree poked out of the ground, looking lost and out of place amongst the rolling tundra and rocky outcrops.

The ride across the border was characterised by a sometimes soul-destroying headwind, blustering through this region of glacial lakes and high tundra. The skies cleared briefly in Carcross, a hamlet between Whitehorse and Skagway, so we made the most of the break in the weather to head out on a mountain bike ride. A good move, as the area was said to offer one of the best descents in Western Canada… 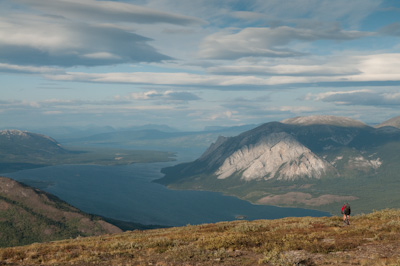 How's that for a view? And thus began a thirty minute, white-knuckled singletrack descent...

We’d heard the trails here were world class – in fact, Carcross and Whitehorse are touted to be the next big thing in Canadian mountain biking. Luckily we bumped into a group of riders who drew us a map of a massive cross country loop; aptly it was on the back of a beer carton. 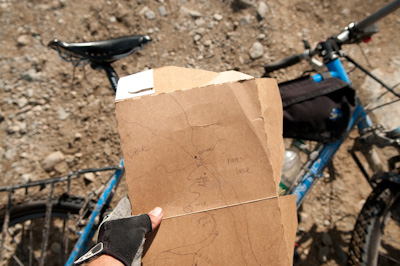 Our beer carton map. Not to scale. 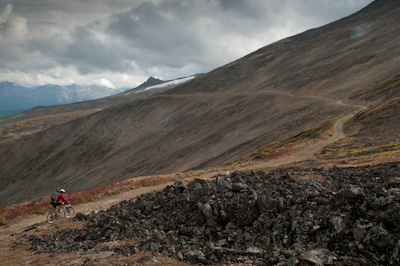 The climb followed loose, scrabbly wagon roads that once linked the turn of the 20th century silver mines scattered around these parts. 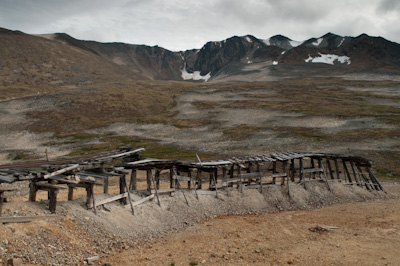 A few skeletal remnants are still strewn around, lonely and eery amongst the treeless tundra. This mine was closed down as late as the 1980s. Up on the summit, we finally spotted some caribou in the distance. Yey! 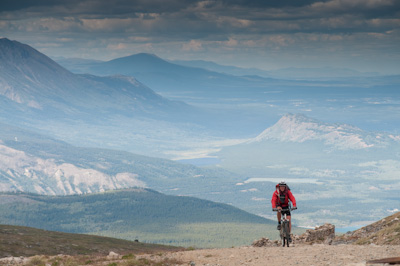 It was a climb alright. Downhill riders get an uplift to the top. We did it the old fashioned way. 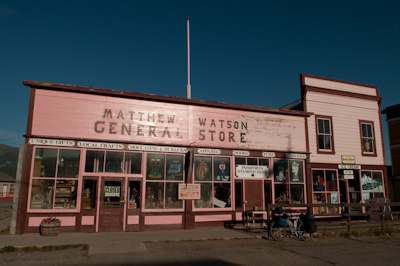 The general store in Carcross, which serves up particularly tasty $2 muffins – perfect fuel for the ride. Carcross is home to the Tagish First Nation and aside from the odd tuft of grass sprouting between train rails like unruly nose hair, it’s immaculately kept. 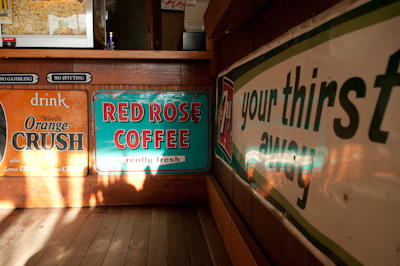 If you time your visit not to coincide with one of the tour buses, it's almost like you've stepped back in time. 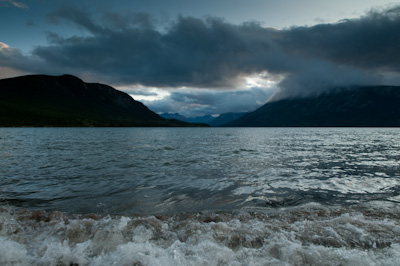 We camped beside Bennett Lake. A strong prevailing wind whipped up a pounding surf and contorted the tent like restless sleeper all night. 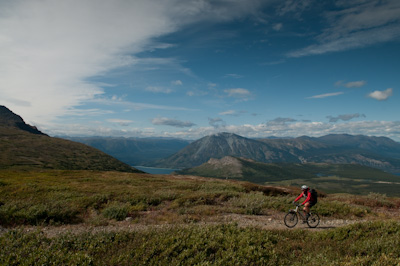 Mineral deposits in the glaciated lakes give them a turquoise tint. 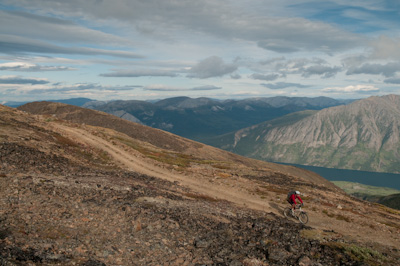 The track was steep and rough going but big on scenery. There's a whole network of these kinds of trails around, sometimes dead ending at old mines perched on rockfaces. 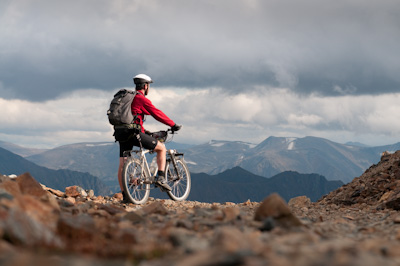 As a beam of light pierces the cloudcover, Dan takes a breather to soak up the views. Then it's down, down, down...

1 thought on “Back in Alaska”