Alaska is a diverse and an unusual looking state; ball up your right hand hand, outstretch the little finger and you’ll have its general shape.

Since vast chunks of it are unreachable by land, Dan and I didn’t take much persuading to take a break from cycling to travel the Alaska Marine Highway and explore the waterways of the South East (that’s the thin bit that extends along the bottom of the wrist). The only way to reach many of the waterlocked settlements here is by boat or plane – an excellent excuse if ever I heard one. 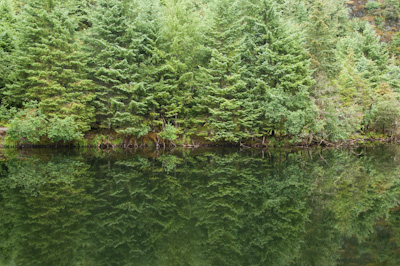 At times, the forest comes down right down to the placid sea.

Negotiating its way through the narrow passageways of Alaskan fjords, the state-run ferry links one settlement to the next as it makes its way sedately south to Prince Rupert, in British Colombia, Canada. It’s a long and unexpectedly epic ferry ride – past migrating whales from Hawai, around occasional shards of floating ice, beside thick, sheer boreal forest (part of a swathe that runs right down to that runs all the way down to California), and beneath vast, overhanging glaciers. 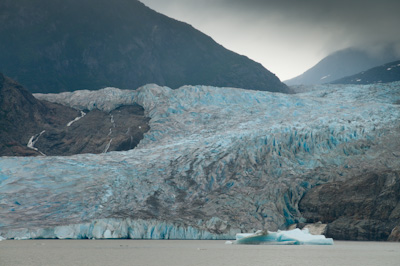 The Medenhall Glacier flows 12 miles from its source, the Juneau Ice Field. This is the view from the car park…

When it rains, rivulets race down the window panes, and the ship lulls gently from side to side. Every once in a while, the captain makes an announcement and we scramble onto deck to catch a brief sight of a school of porpoises diving alongside the boat, or a humpback whale bob to the surface, take an enormous breath, and lunge back down into the abyss once more, with an almost lethargic flick of its magnificent tail. 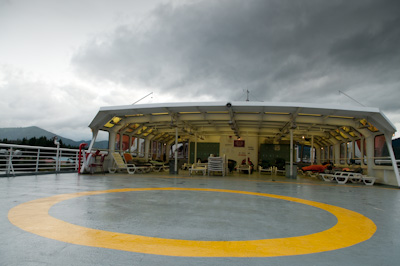 Sleeping arrangements on the ferry is a pretty relaxed affair – if you’re on the standard ticket, costing a very reasonable $160 from Hanes to Prince Rupert, you can even pitch your tent on the roof when the sun is shining, or lounge on the deck chairs. Bodies lie contorted all over the various floors, and everyone picnics the days away.

Each settlement in Alaska’s Panhandle, as it is known, has its own character, influenced greatly by both its native and European history – in Petersburg, for instance, the local newspaper was still printed in Norwegian until 1966. 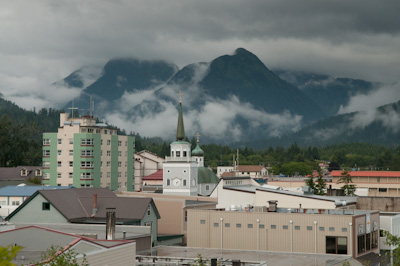 St Michael’s Cathedral, a replica of the original Russian Orthodox Church that was destroyed in a fire, gives Sitka a distinctive skyline.

Over in Sitka, home to fur trading Russians for over a century before Alaska’s sale to America, we stayed with Alexei and Chloe. I met Alexei, an LA-born physio therapist, on the Bristol-Bath cyclepath last year – he was heading over to France to watch the Tour de France.

Alexei and Chloe have both lived in Sitka for several years and while chance seems to bring outsiders to this state, it takes a certain kind of personality to keep them here.

As far as I can see – aside from the various native populations – there’s those who arrived looking for work in the oil heydey and stayed, there’s ‘rednecks’ drawn by a love of hunting and a relatively unobtrusive state government, and there’s the progressive greenies. Despite the fact that Alaska is made up of these often opposing groups of people, there are common ties between them. Each seems drawn by Alaska’s intrinsic connection with its wilderness and the challenges that this brings, by its small communities, and because it offers a chance to escape the normal pushes and pulls of the lower 48s – the rest of the US. Even if such a brief (summertime) visit allows me only to scratch at the surface of this vast state, I can definitely see the draw. 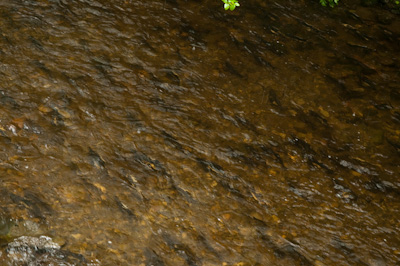 When a high tide combines with heavy rainfall, the rivers and streams run dark with salmon on their exhausting journey to their birthplace (guided by unfathomable inbuilt navigation), where they spawn and die.

Alexei took us on an impressively in depth tour of the many facets of Sitka that filled my brain with about as much as it could handle. We stood on bridges and marvelled at streams literally teeming with salmon, slipping and sliding over one another, making the most of the heavy rains to fulfill their natural instinct and return to their birthplace to spawn. 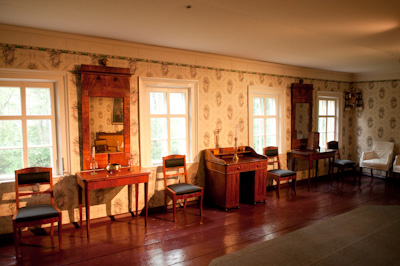 The interior of the Russian Bishop’s House, built in 1844-1846. Most of the furniture is original, or like the wall paper, perfect replicas sourced from Europe. Bishop Innoventii (later canonized Saint Innocent of Alaska) was a man of the book, as well as being a carpenter and a linguist – he translated parts of the bible into the local Tinglit language, which he spoke fluently.

In the centre, we wandered around the old Russian Bishop’s House, a lovingly restored showpiece, originally built in Sitka spruce in 1843 for Russian Orthodox Missionaries. 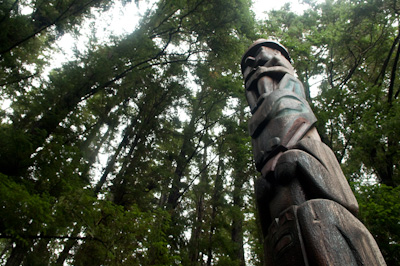 Totem poles, carved from spruce, are public records of identity and clan pride – a record of ancestry, or of a legend or historic event, or a memorial. I liked wandering around the Totem Trail and experiencing the poles in their natural setting, changing with the light, or rain, or time of day. Traditionally, the poles deteriorated naturally into the earth with the elements.

And there was time to enjoy the peaceful sanctuary of the Totem Garden. Here, Tlingit baskets are still made dyed with hemlock bark and blueberry juice, battle masks depicting ravens are still hewn from wood by the resident carver, and a swathe of forest is interspersed with tall, impressive totem poles chiselled from spruce, each of which tells a story of its own.

Just down from where they lived, we visited the octagonal Sheldon Jackson museum in the old college campus to the east. It houses a real gem of a collection, including drawer after drawer of immaculately presented insights into native Alaskan culture. Like a turn of the 20th century camping shop, there’s an array of indigenous kayaks, cold weather clothing and even dry suits, each intricately made with seal fur, skin and stomach lining in lieu of today’s Goretex.

Of course, we paid homage to the local bike shop, Yellow Jersey Cycles, whiling away plenty of time Talking Bike (and that’s after Alexei and I had been up till 4.30am the night before discussing the various merits of tyre choice), and I even managed to squeeze in a grounding yoga class. 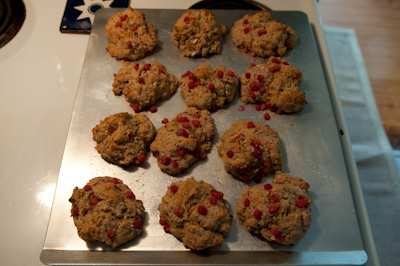 From salmonberry jam, to huckleberry scones and rhubard pies, we ate like Berry Kings in Sitka.

Alexei and Chloe have taken over the baton of incredible Alaskan hospitality we’ve been lucky enough to receive. This last week, I’ve been getting way too used to eating fine food – fresh salmon, vegetables from the garden, rhubarb pies, huckleberry scones… Too good!

I’m also learning about the complexities of hunting, and the divide between subsistence hunting (understanding where your meat is coming from, respecting the animal and using every last part of it), with the more brash (and to me) pointless pursuit of trophy hunting. If you get the chance, check out Eating Alaska, an interesting documentary which comments on this, in which Chloe features. As well as having taught in a remote Inupiat village near Kotzebue for four years, Chloe knows Northern Alaska surprisingly well. Despite her slight build, she’s worked as a hunting, fishing and climbing guide in one of Alaska’s most remote and challenging regions – her clients have included an apparently dwarf-like Steven Seagal and fly fishing-loving Jim Carrey! 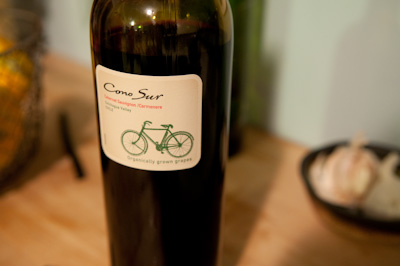 Our fine food was washed down with wine, after an appropriate toast to 2 wheels. 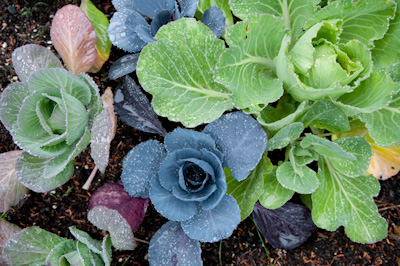 Chloe and Alex are part of a group of friends who grow their own vegetables and berries; each concentrates on particular varieties, then they swap food amongst themselves as they need it. 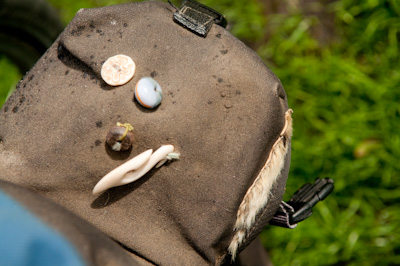 A bead and patching expert, Chloe also sourced some fine Alaskan examples for my pannier customisation project – a decorative button made by one of the grandmas at her village, and an offcut of seal fur used to make their clothing.

The next stage of the trip is on my lonesome, as Dan is heading back to Montana to resume his studies. The ride from Prince Rupert to Banff is around 1500km in distance, and one I need to cover relatively quickly before the onset of autumn. Soon, the snows will start to fall, most likely as I make my way along the Great Divide Mountain Bike Ride.

The break’s over – time to get back on the saddle… 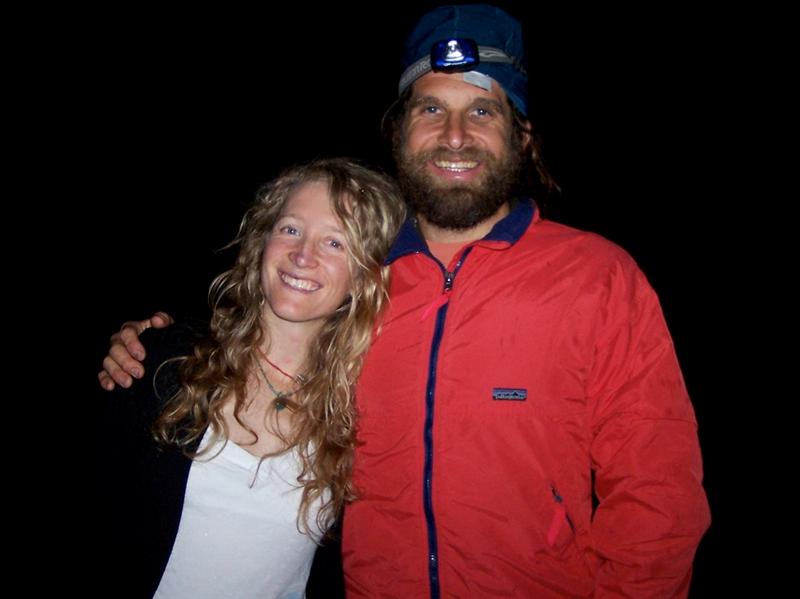 Thanks guys for your wonderful hospitality – until the next time…

3 thoughts on “The Panhandle”