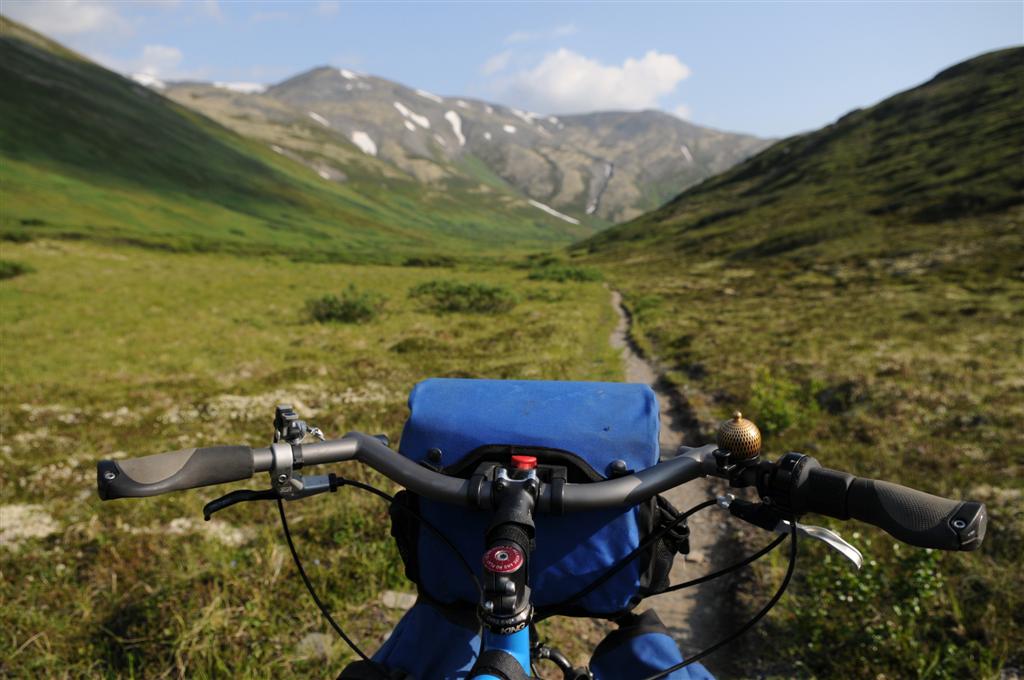 First off, Alaska is amazing. Both Dan and I agree that this last week has been amongst the best mountain bike touring we’ve ever done. The scenery is expansive and simply beautiful – and that’s just the little nugget of the Kenai Peninsula that we’ve experienced so far. The weather has definitely helped – it’s been the best conditions in five years, apparently – blessing us with views of sweeping, snow capped ranges, crystal clear evening light and sublime trail conditions. Riding aside, we’ve received an incredibly warm welcome from all the Alaskans we’ve met, each seemingly surpassing the next. 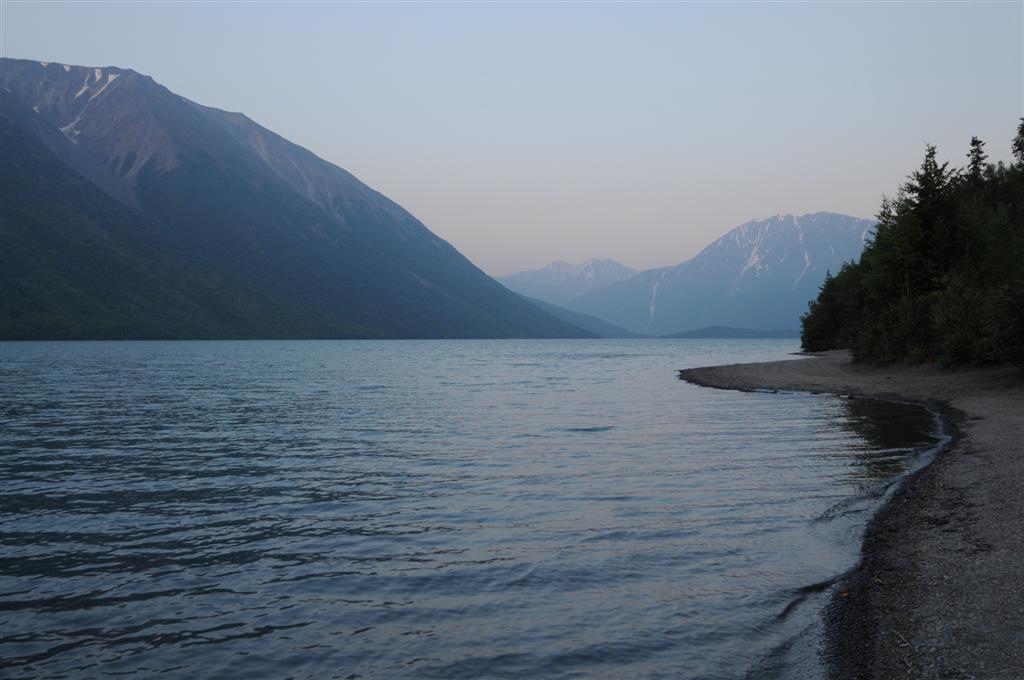 The midnight view at Kenai Lake made even instant ramen noodle taste good.

This last week has also given us an insight into the two distinct sides of this enormous state. There’s the Alaska of pristine parks and vast tracks of protected land and reserves (almost three quarters is owned by federal or state agencies, like the Arctic National Wildlife Refuge). And there’s the Alaska of (now dwindling) oil, and the junk wasteland this oil has brought with it. Empty husks of old cars and trucks litter many a scruffy backyard, streaked with rust and sprouting weeds and wild flowers, or bleached by salt water.

Without getting too political, Alaska seems to embody the way attitudes to the environment are compartmentalised in the US. On the one side, there’s a system of national parks and and a forest service that’s second to none; every effort is made to protect flora and fauna, and laws strictly enforced for sustainable fishing. And on the other hand, even now, there’s an incredible squandering of energy and resources, and a very dubious government energy bill. All this oil has spawned a completely car-centric culture, home to massive gas-guzzling V8 trucks, and cars almost as wide as those in Europe are long. 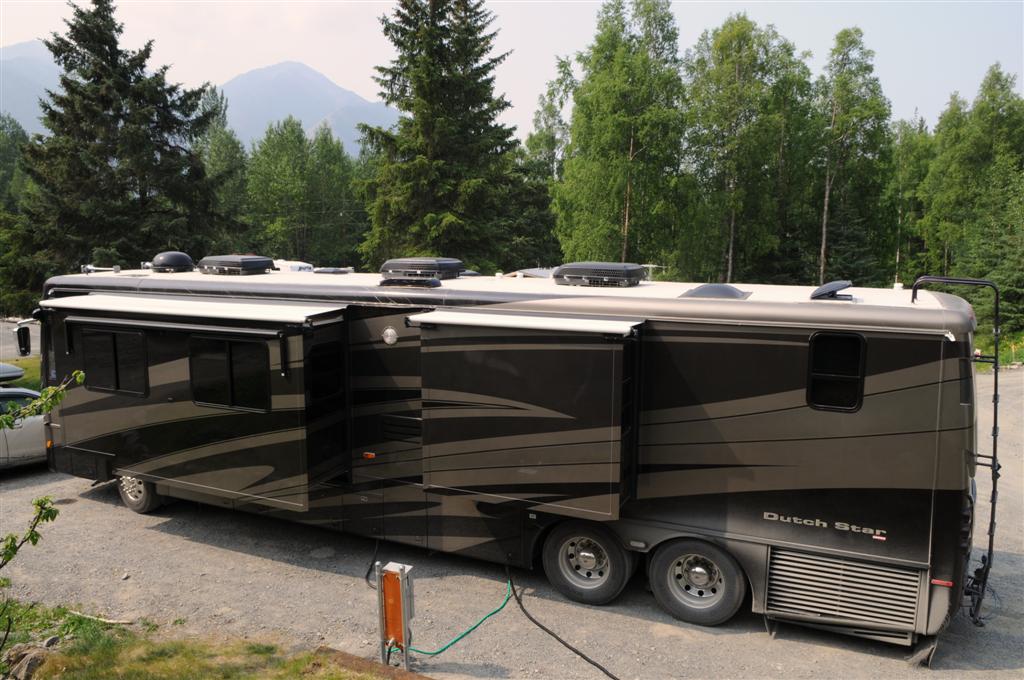 The Goliath RV. This one was pulling a 'short range' Hummer. Various compartments pop out to the side and the top, like a Transformer. Hydraulic, RV-levelling legs mean you won't even spill your beer.

It’s the Goliath RVs that really intrigue me though. These giants of the road are literally as big as passenger buses, parking up in neat lines before the most majestic views imaginable. Costing hundreds of thousands of dollars and squeezing out little more than six or seven miles to the gallon (one US gallon is 3.8 litres), they’re jam-packed with all the mod cons; a complete lux bubble. For the cyclist they can be a little precarious – especially when there’s no shoulder to ride on – as they bumble along unfamiliar routes, taking every inch of available highway. Each to their own, but it does feel a step too detached from nature… I had to smile when I read the sticker on one of them as it thundered by: our little paradise. 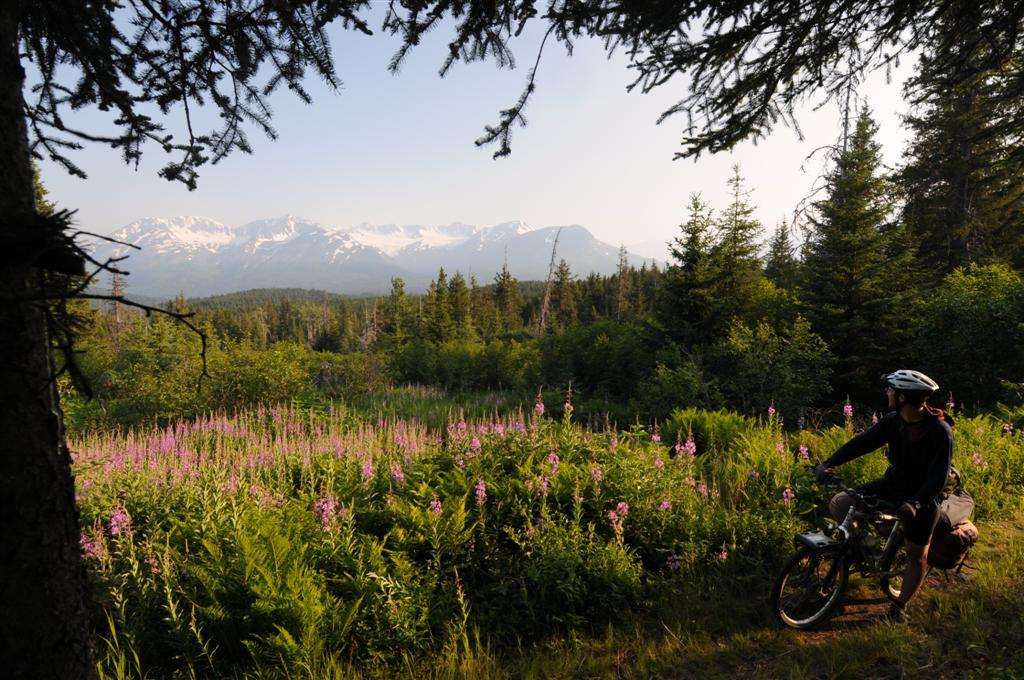 Alaska One: stunning mountain scenery and barely a soul on the trail. 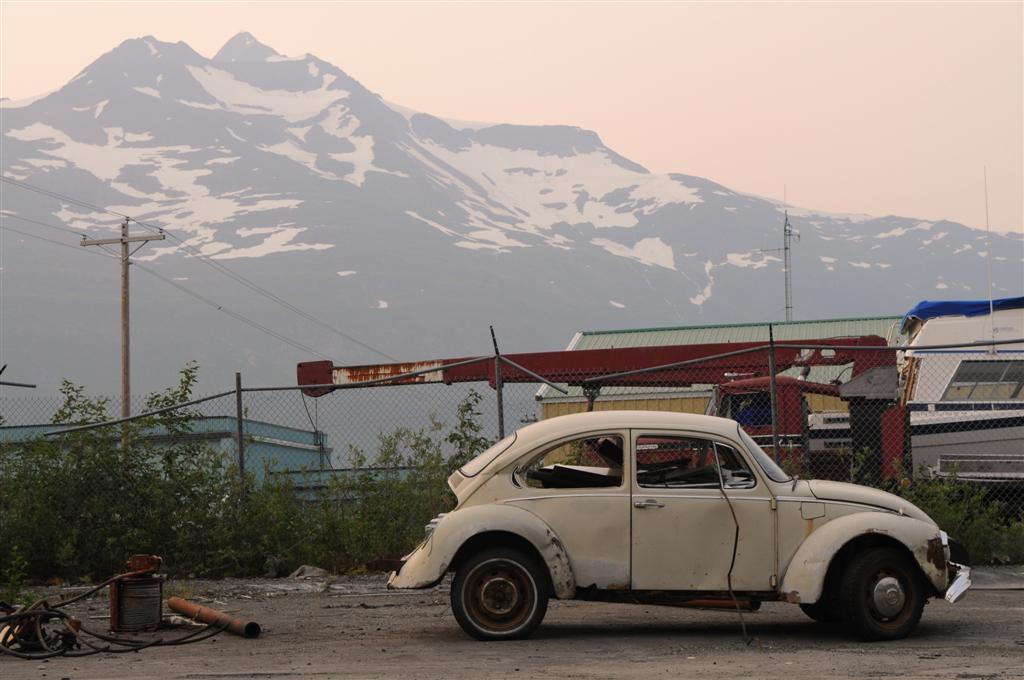 Our route turned out to be a cracking loop. Eric from Epic Designs knitted together a way of linking up some of Alaska’s best singletrack, and we weren’t disappointed. Travelling with so much kit didn’t always make our life easy, but gave us the versatility to pull over and camp where we wanted. We tackled a mountain bike trail every day, with road sections in between. 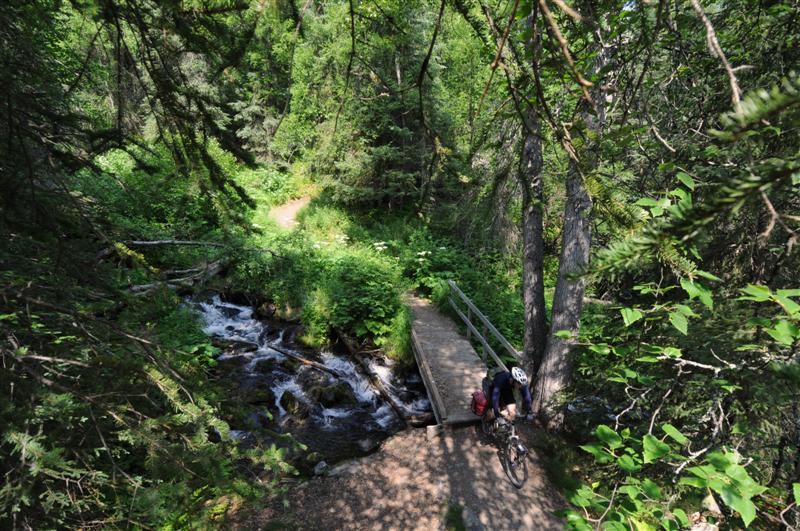 The 39 mile Resurrection trail was particularly epic, and is apparently rate as rated as Alaska’s top trail. I can honestly say it’s some of the best singletrack I’ve had the pleasure of riding, with a lovely shape to the journey. A sinewy climb and a fast flowing descent, both through ancient, moss-coated forest, provided the bookends to a spectacular stretch across wild and open terrain at the pass top. An encounter with a grizzly and her cub on the way up added some extra spice to the ride too… 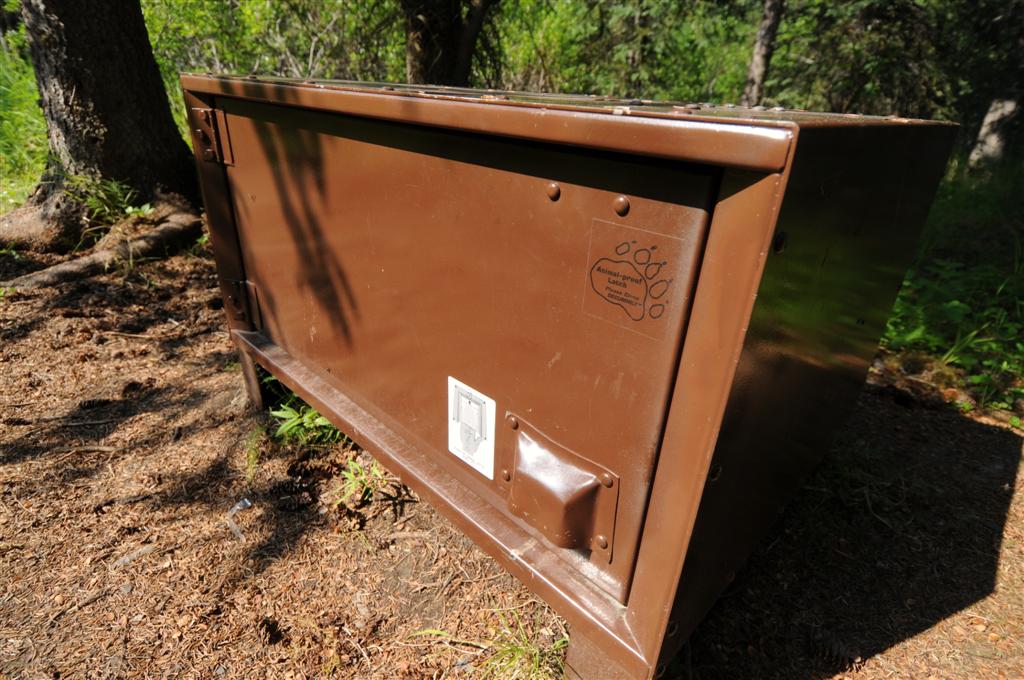 There were camping spots along the way, many with bear-proof storage boxes. No cooking or snacking in the tent, as bears can smell the odours. 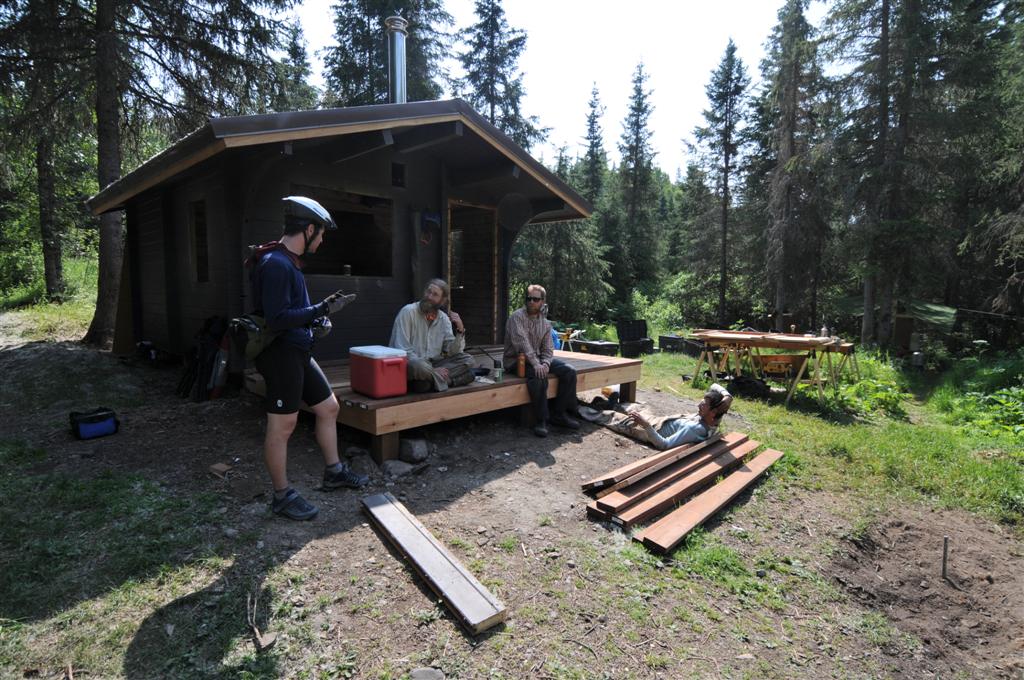 And there were cabins you could book in advance. These carpenters were fixing up a few of them, a nice summer job... In the winter, they head off to Antartica. David told us he's barely had a dark night for four years. Like most men here, they all had beards - an Alaskan right of passage. I'm growing mine... 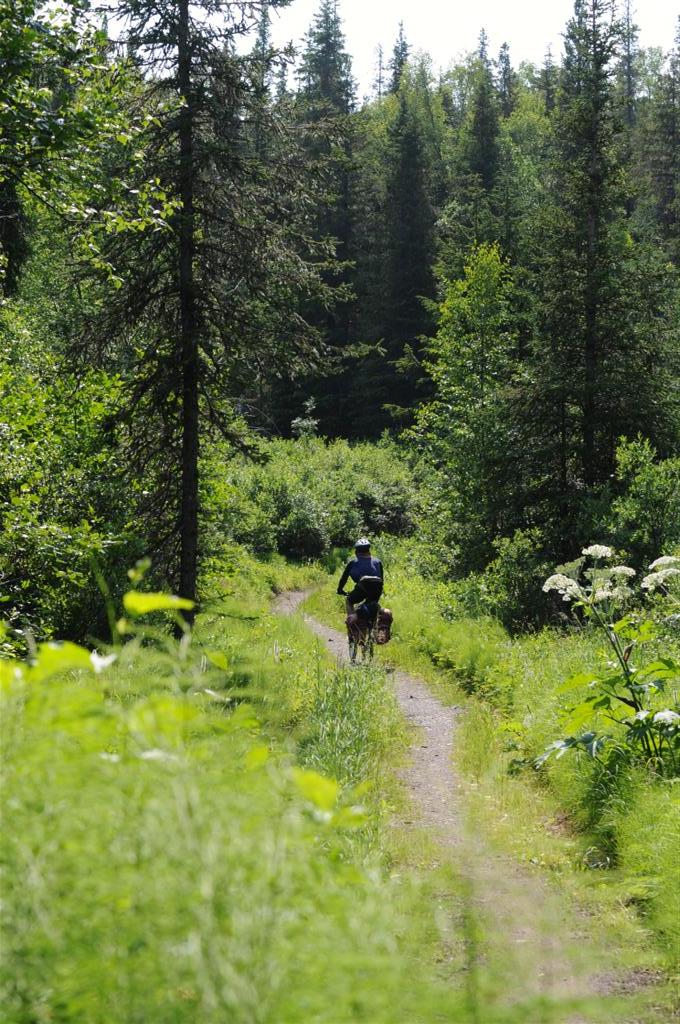 It was hard to believe these trails weren't built for biking, and that they were dual use. The well groomed singletrack wound its way up through the forest. 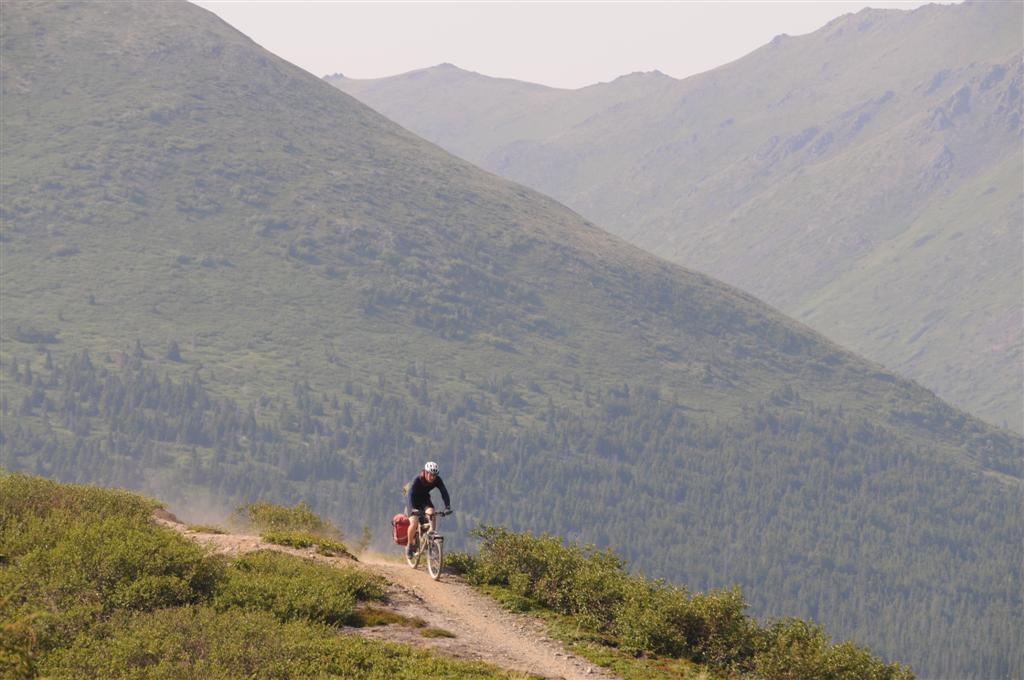 Until it emerged onto open land towards the top of the pass. 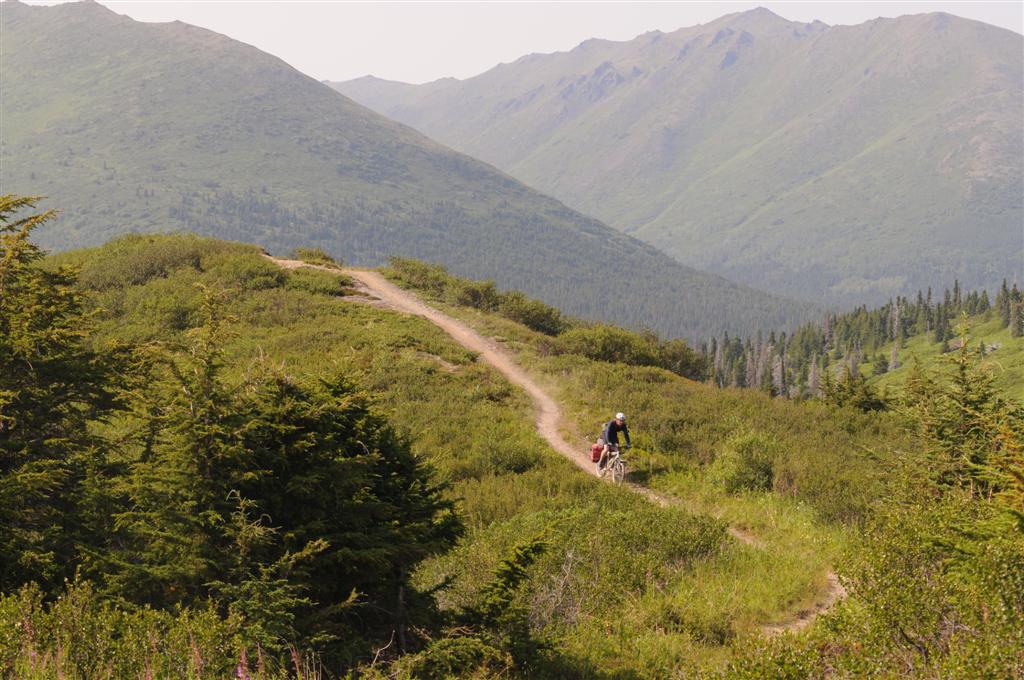 Lovely. More of this please... 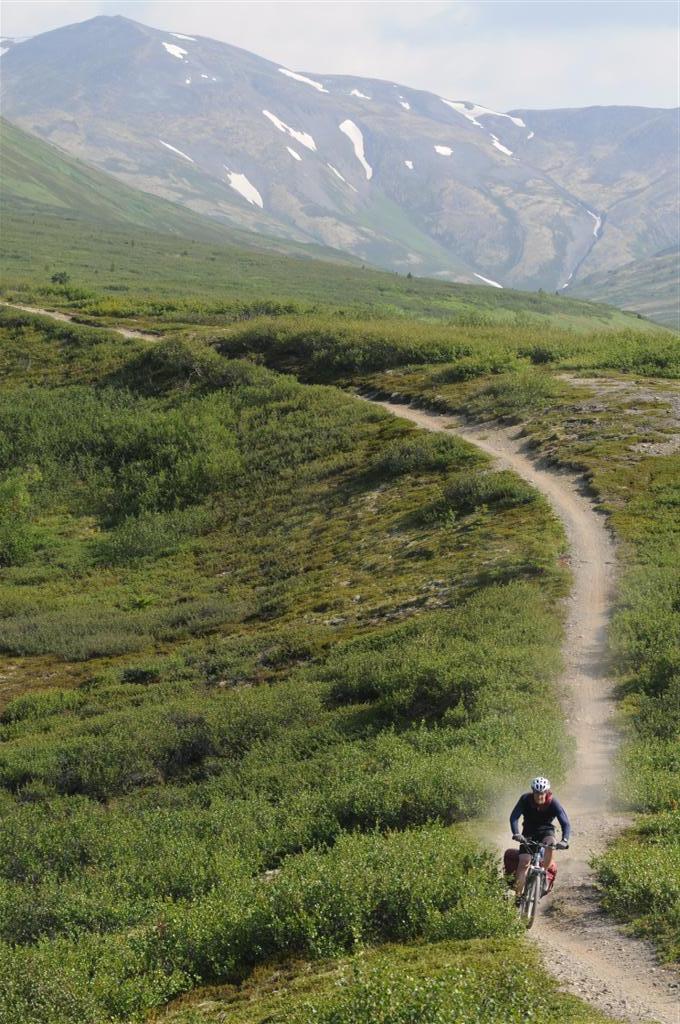 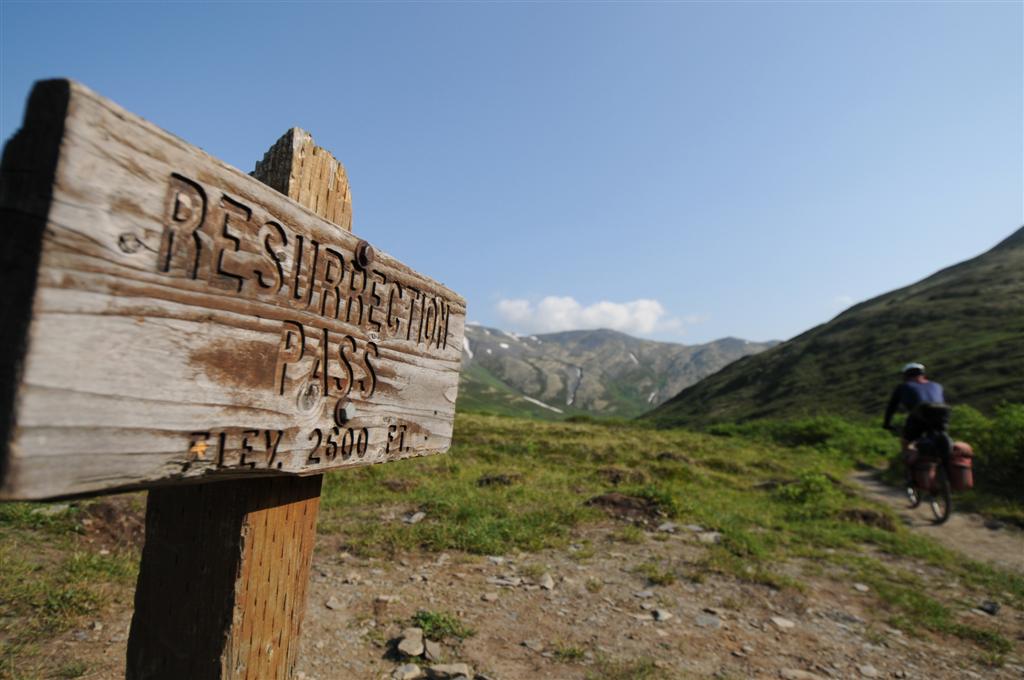 Cresting the pass top, at last.

It was hard to imagine the trail being any better. Flowy singletrack, a grizzly sighting, swathes of wild flowers and grand mountain views. It was a little hazy as there’s some four hundred fires burning in the state, thanks to the heatwave Alaska is experiencing.

After some encouragement, Daniel began to release his inner whoop, and was soon whooping his way down the bermy descents. This expression of biking excitement had a dual purpose, as we didn’t want to surprise a grizzly round the next bend. We also yodelled out a bear-fending mantra. I went for a ‘Yodolo hoo ho’ style of incantation, while Dan favoured more of a ‘Yoyoyoyoyoooo’ battle cry. 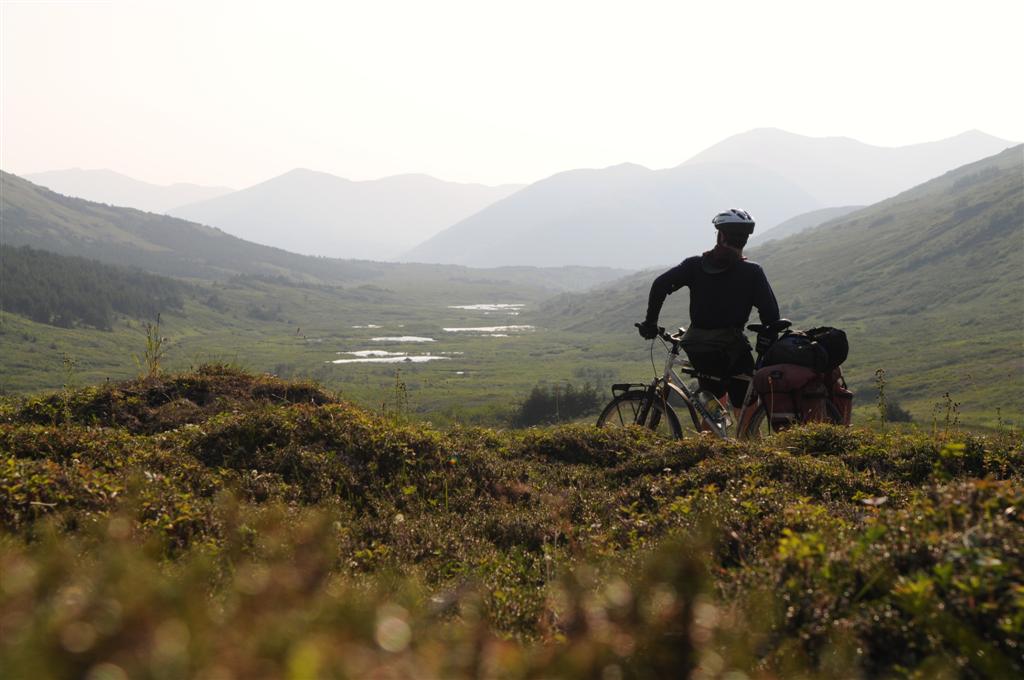 A pause for breath after the climb, and a chance to take in the view. 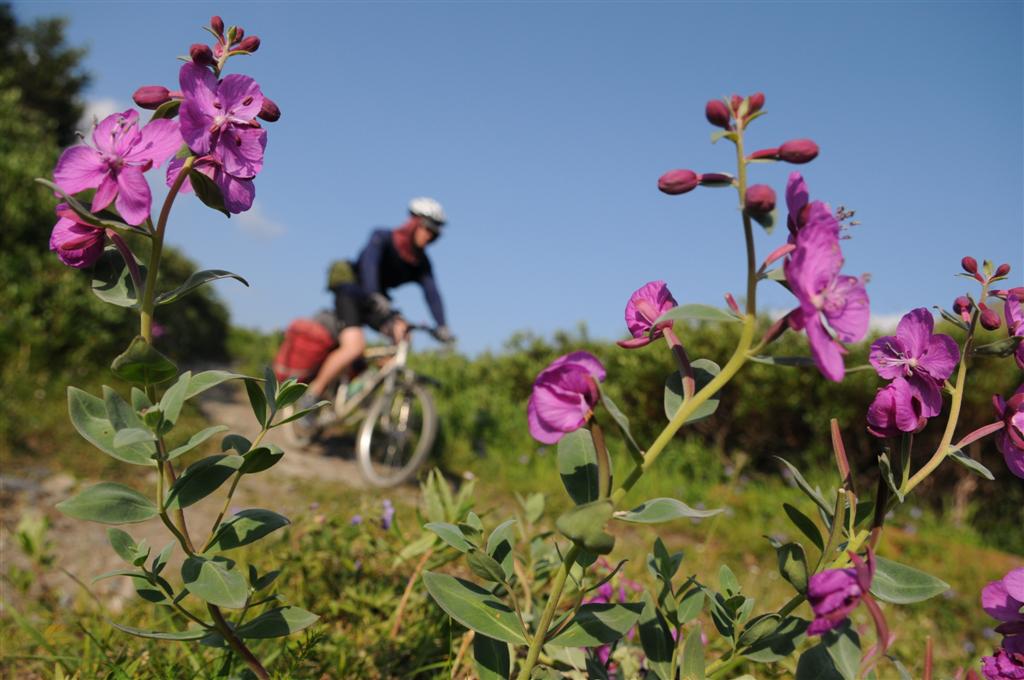 July is a good time for wild flowers. We had to watch out for the white flowered Pushki, similar to cow parsnip, that can blister your skin in the sun. 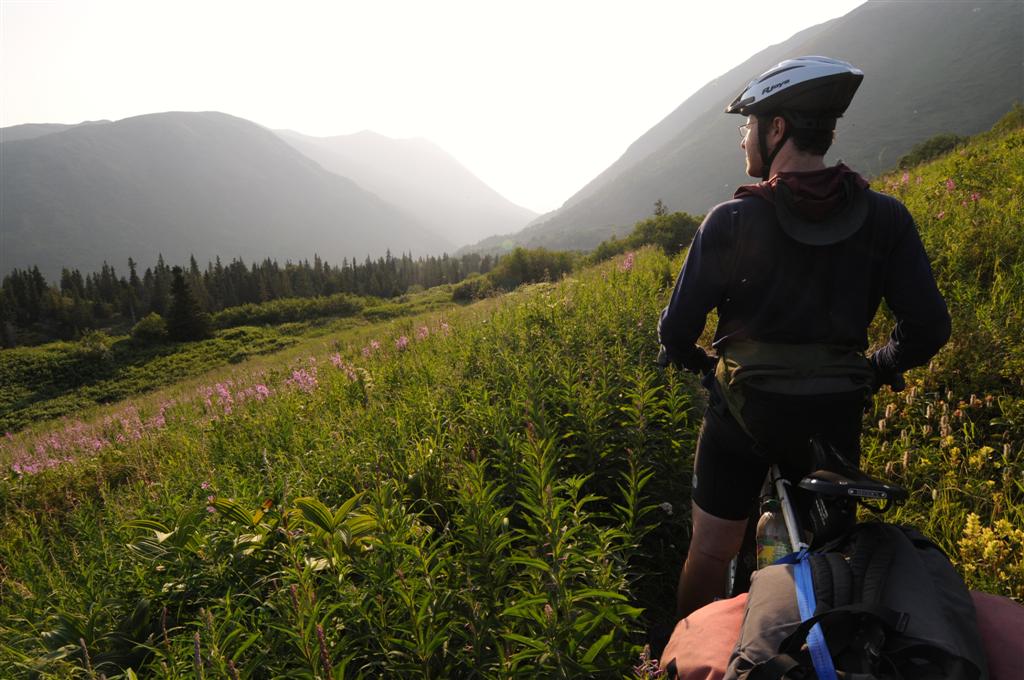 Bliss. Late afternoon light on the descent down from Resurrection Pass. This is what it's all about. 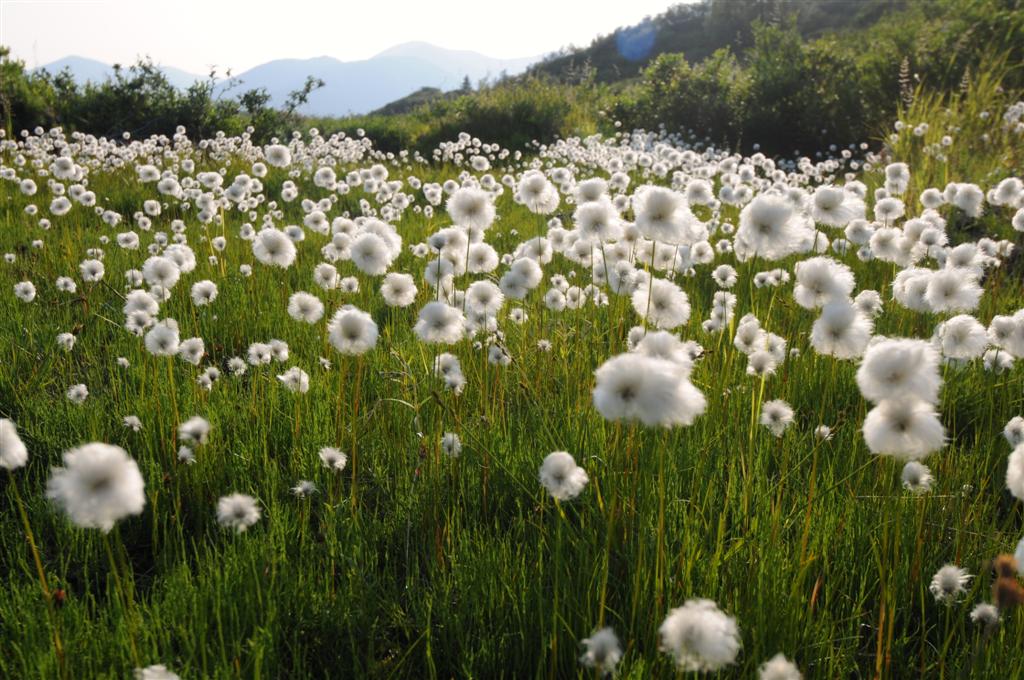 Who knows what these are, but they looked like a fluffy-haired army emerging from a freshwater stream. 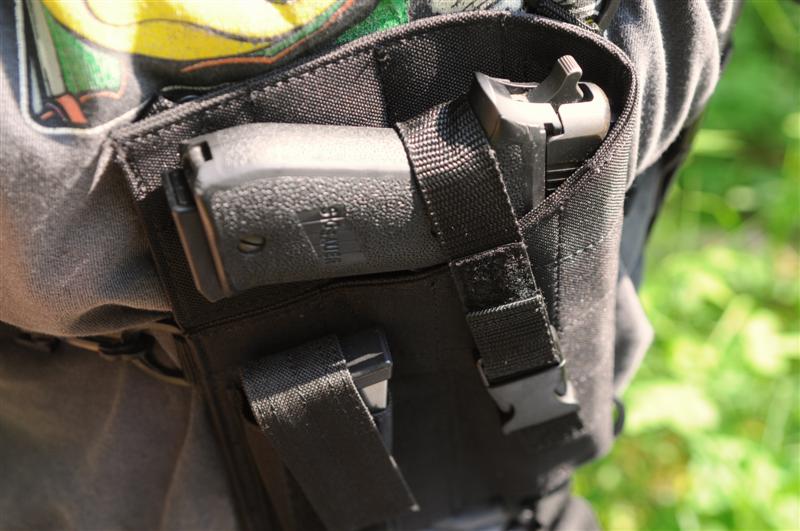 We crossed paths with a few riders. Will was travelling alone and was packing a handgun strapped to his chest, as a second line of defence after the bear spray, velcroed to the top tube of his bike... 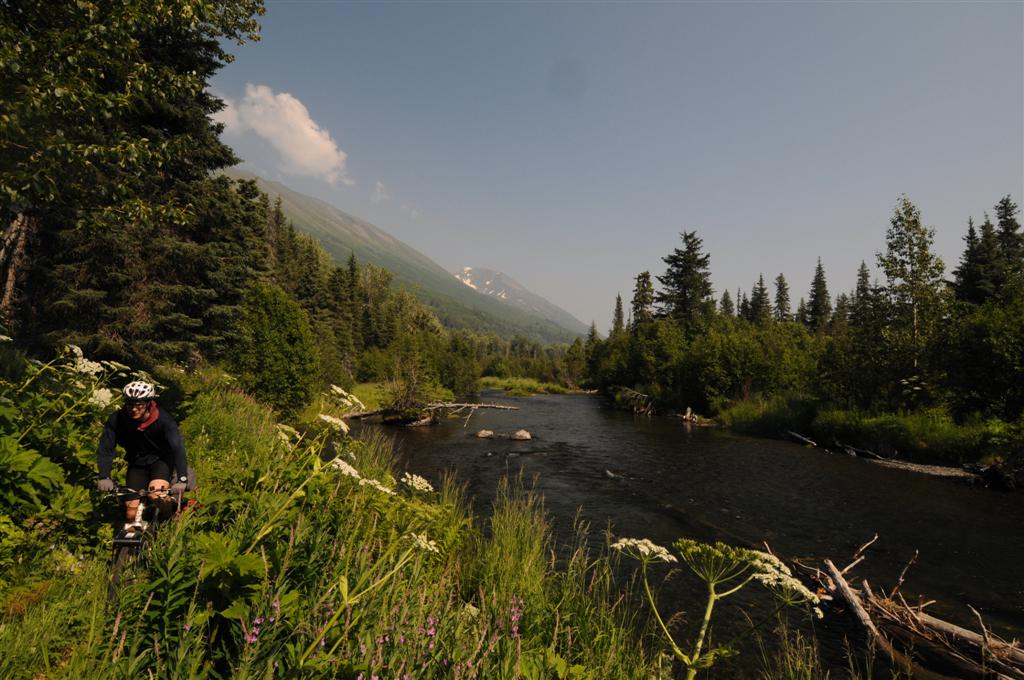 Not a bad spot to pull over for swim. Cue shoal of salmon and soaring eagles.

Russian Lake was crazily overgrown in places and at times, completely engulfed us; we pushed our way through foliage as high as our heads, ‘bushwaking’ our way through on two wheels, as they say here. Still, there was no shortage of big snowy peak views and pastures of wild flowers. Following a river at times, it also offered the chance to pull over and wash (just after we’d seen a black bear lumber off). As we cooled ourselves in the clear waters, a school of salmon worked their way upstream, and bald headed eagles swooped overhead. Add in a backdrop of glaciers, and we had the complete Alaska experience rolled into one. 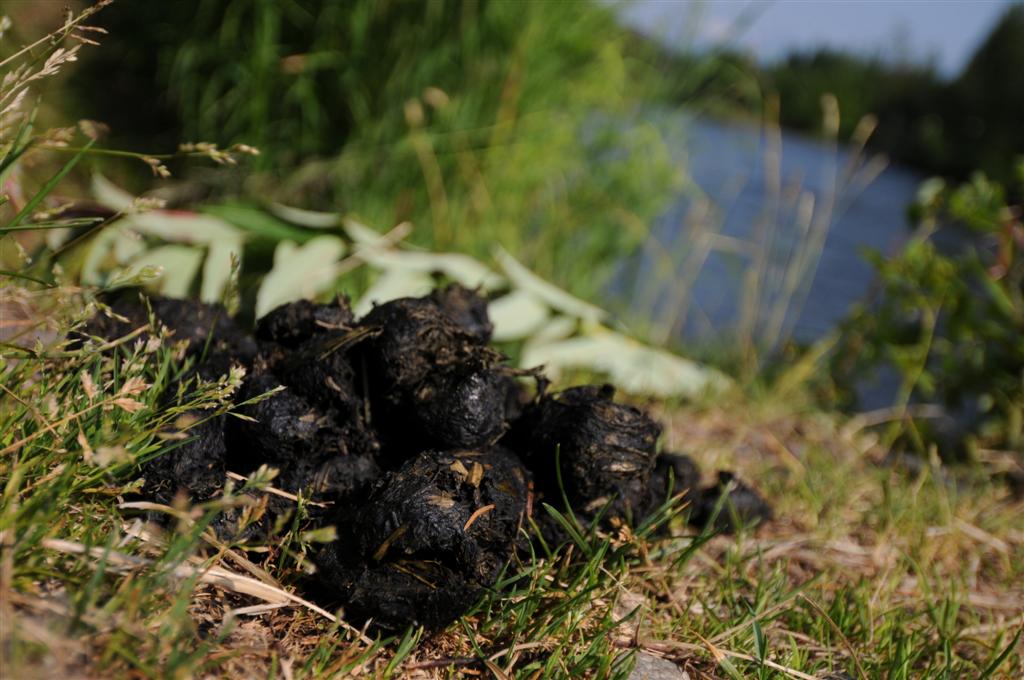 We're no poo experts, but this looked like the work of a bear... 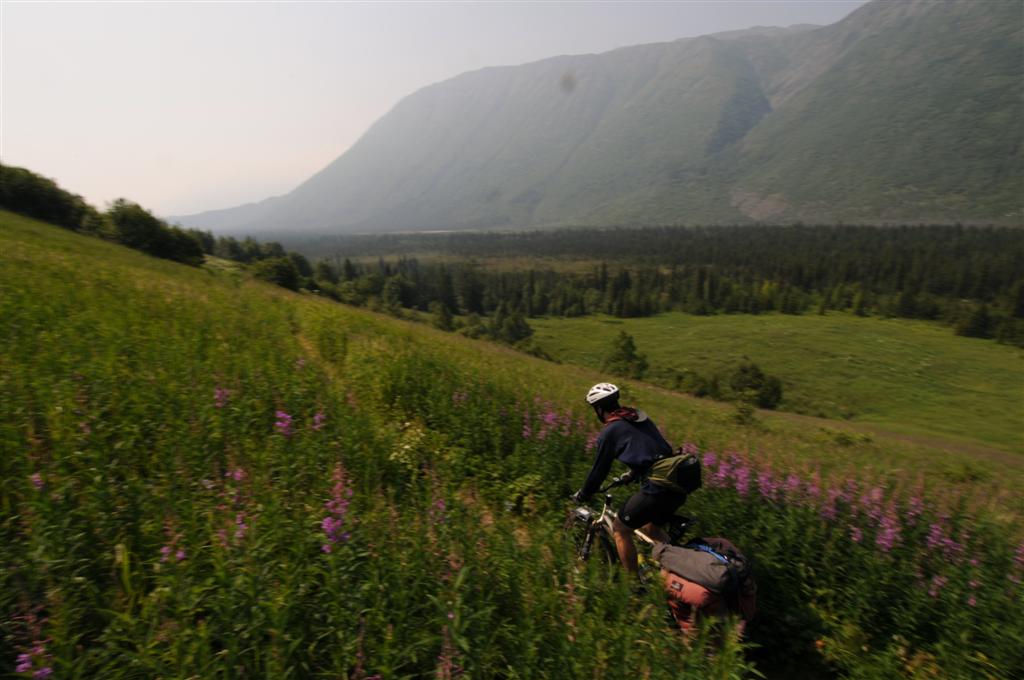 Heading off for Russian Lake, for singletrack Round Two. There's a strong Russian connection in Alaska. The state was sold to the Americans for 2c an acre in 1867, partly because the Russians didn't want to secure it or let it fall into the hands of the Brits. 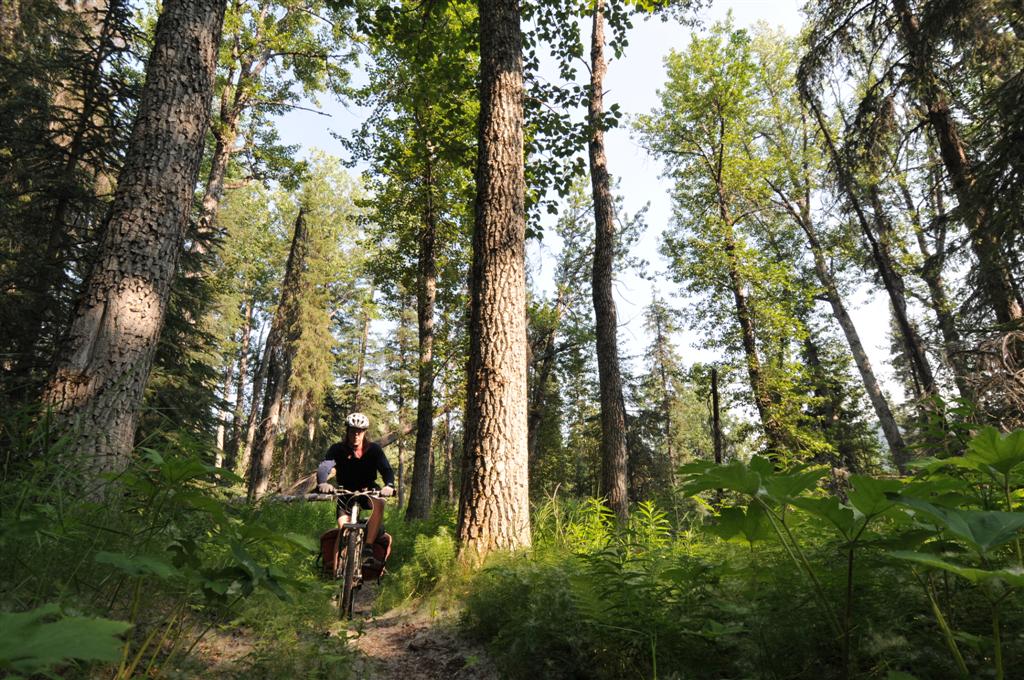 At the risk of sounding repetitive, more sublime forest singletrack... 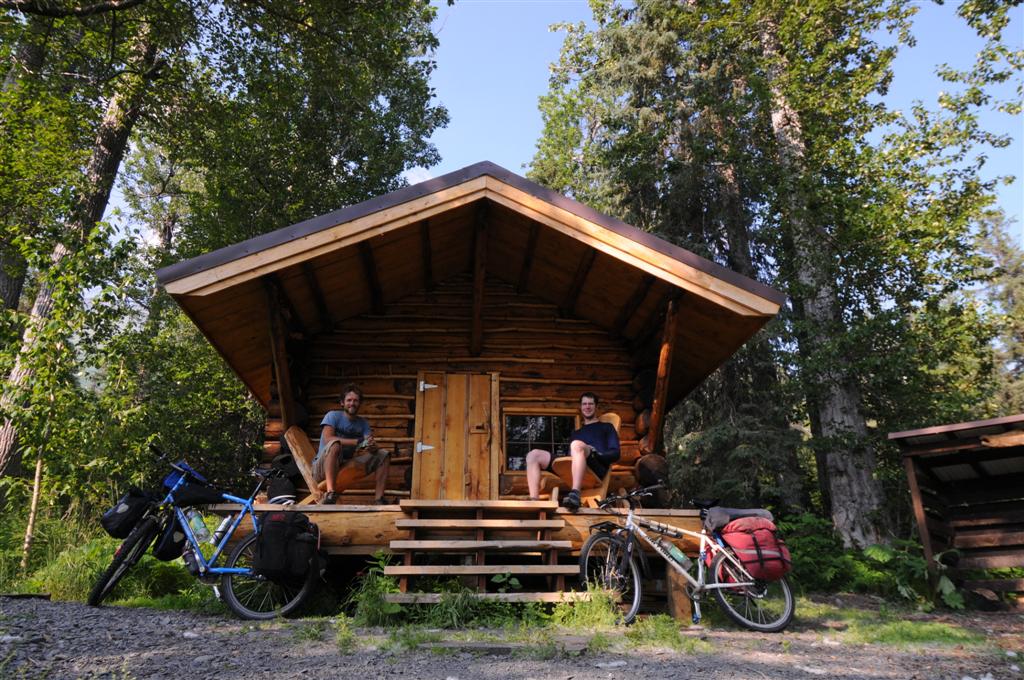 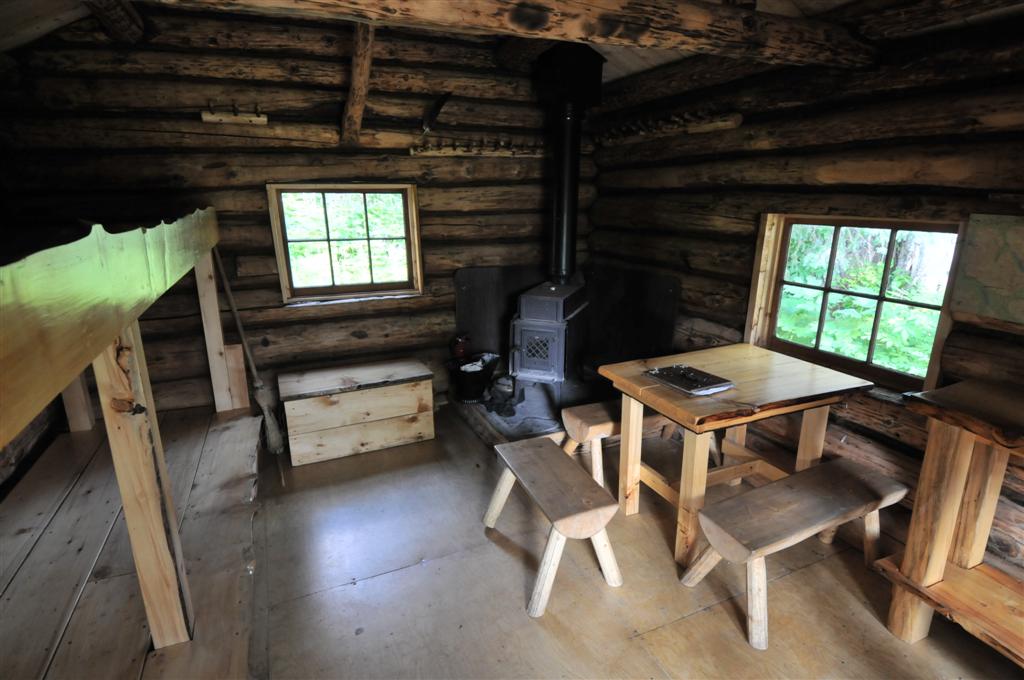 But it did look lovely. This one in the Chugah Forest was hand hewn in 1951 and is maintained by the US Forest Service. The trail and cabin were built in reply to a growing recreation economy on the Peninsula. 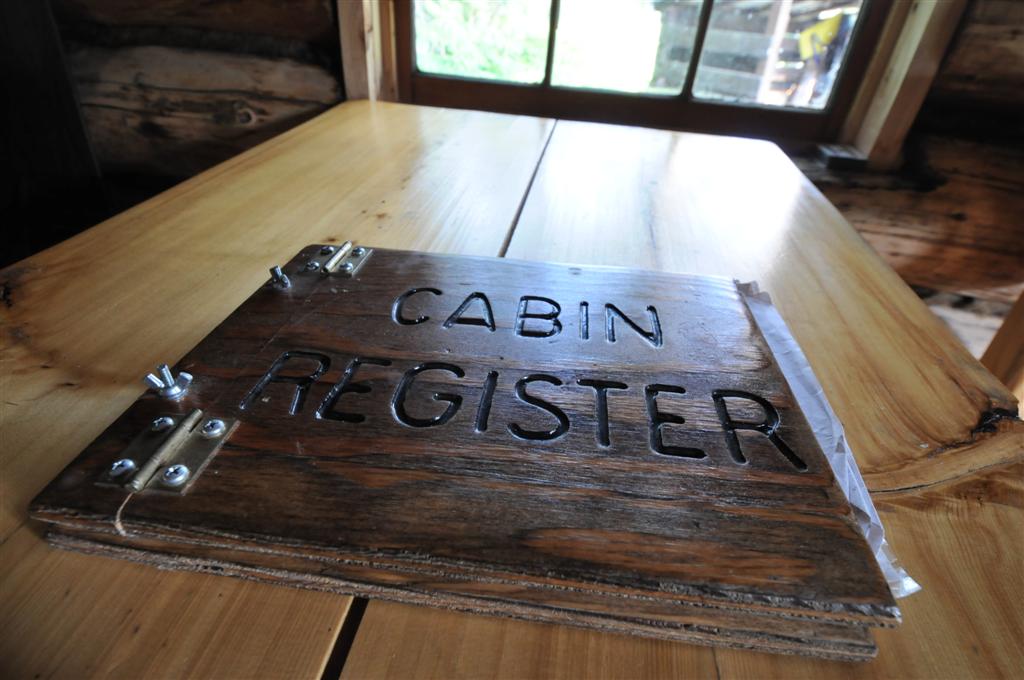 Lovely detailing. There was even a cute little pot bellied stove.

After an exhausting day of battling through the undergrowth, we emerged at Kinai Lake. Our tranquil camping spot was interupted only by two drunk campers philosophising long into the night. The thrust of the vocal argument involved whether one of them, if he was God, would send his own daughter to Hell if she murdered the grandmother of his camping buddy. Only in Alaska…