So after our night on Kenai Lake, a fast gravel road descent fed us back onto the highway at Cooper Landing, where some blueberry muffins refuelled us for the road ahead. 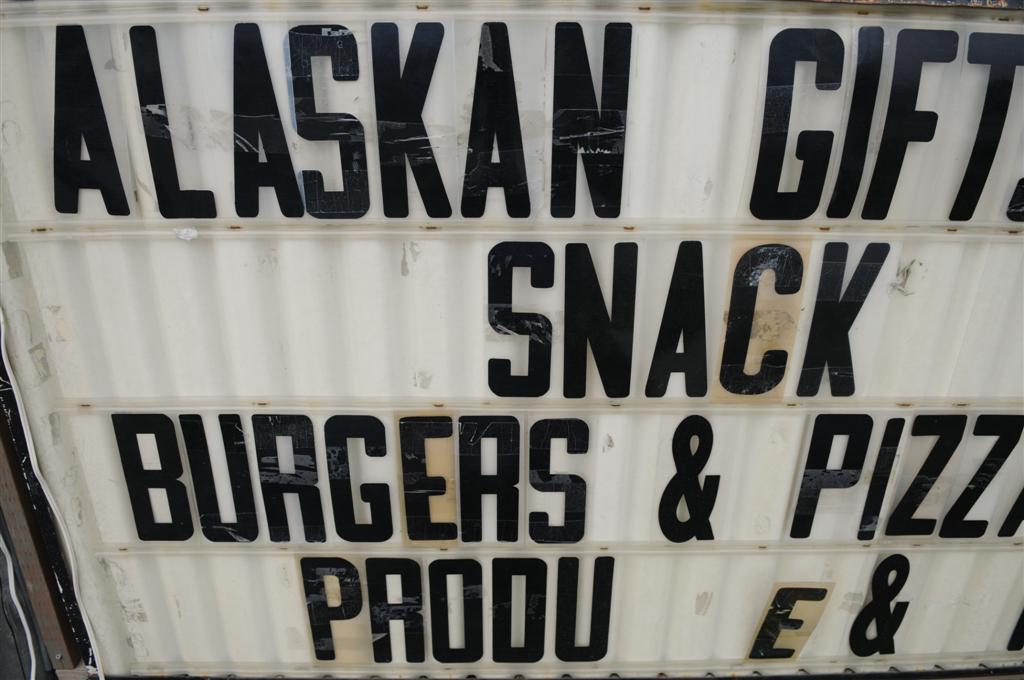 America: you can't beat it for local produce.

Back on tarmac, we pushed on to the tiny settlement of Moose Pass,  then hitched down the dead end road towards Seward, to ride the Lost Lake trail. The busy, windy highway wasn’t a stretch we particularly wanted to ride, plagued as it is by the colossal RVs, with no shoulder on which to seek sanctuary.

We’d also been told to ride Lost Lake unladen, and to stash our kit before setting off. Good advice, as its phenominal descent turned out to be riddled with roots and steep, techy steps – great! A veritable gem of a ride, it unravelled out of the car park with a long, ambly singletrack climb through lush, fern-filled forest, coated in a softly-strokey fur of moss. 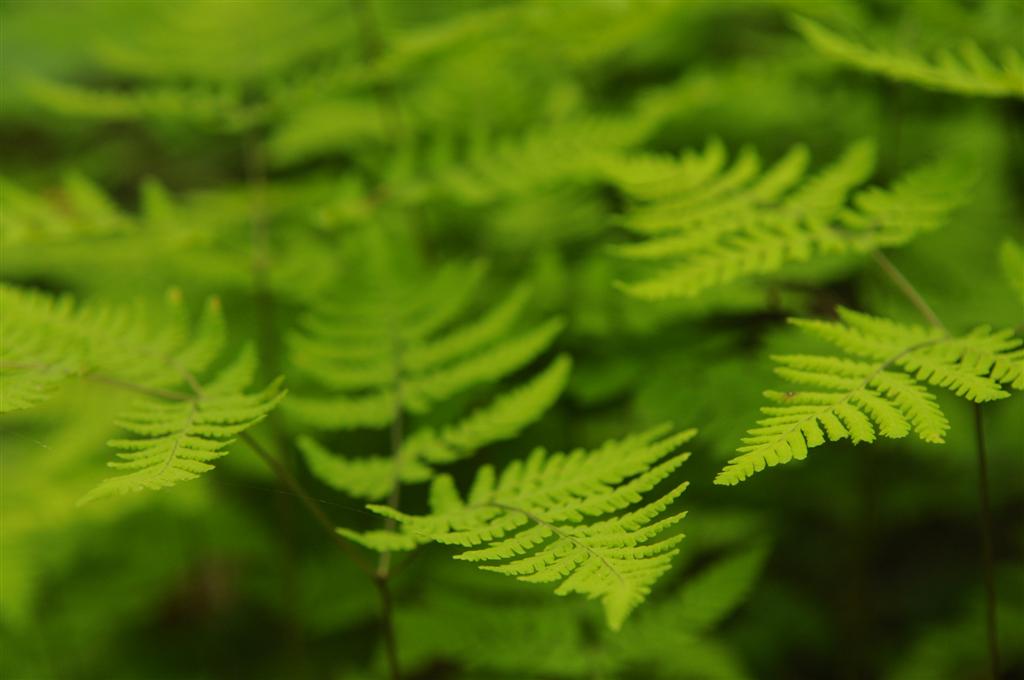 Miniature ferns cast an ethereal light across the trail. 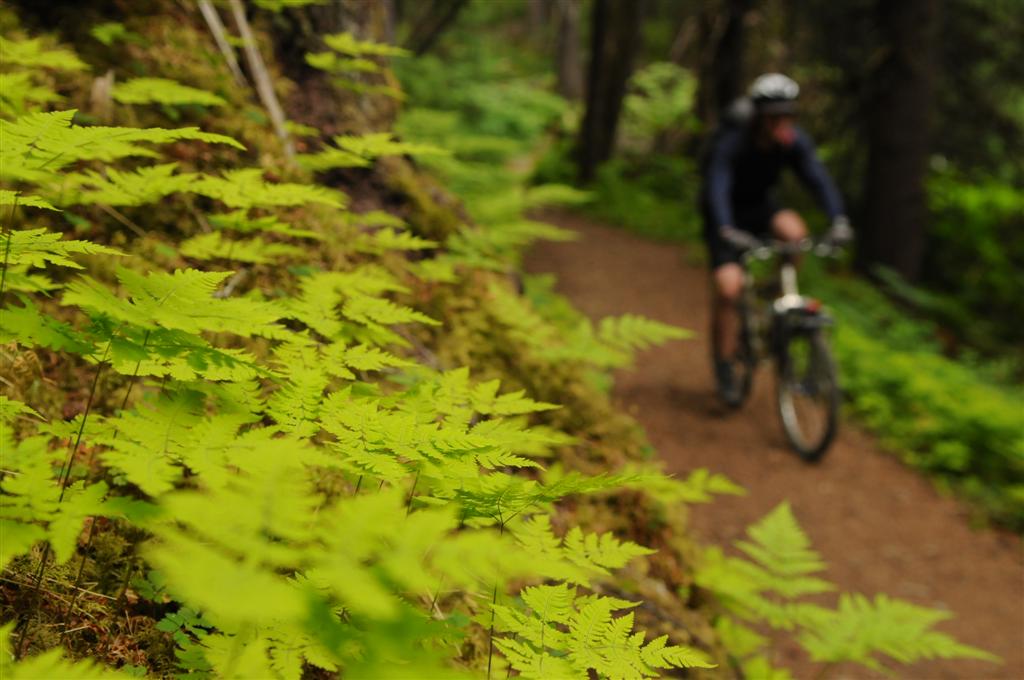 The climb was long but fairly easy going, with the odd rooty ladder. 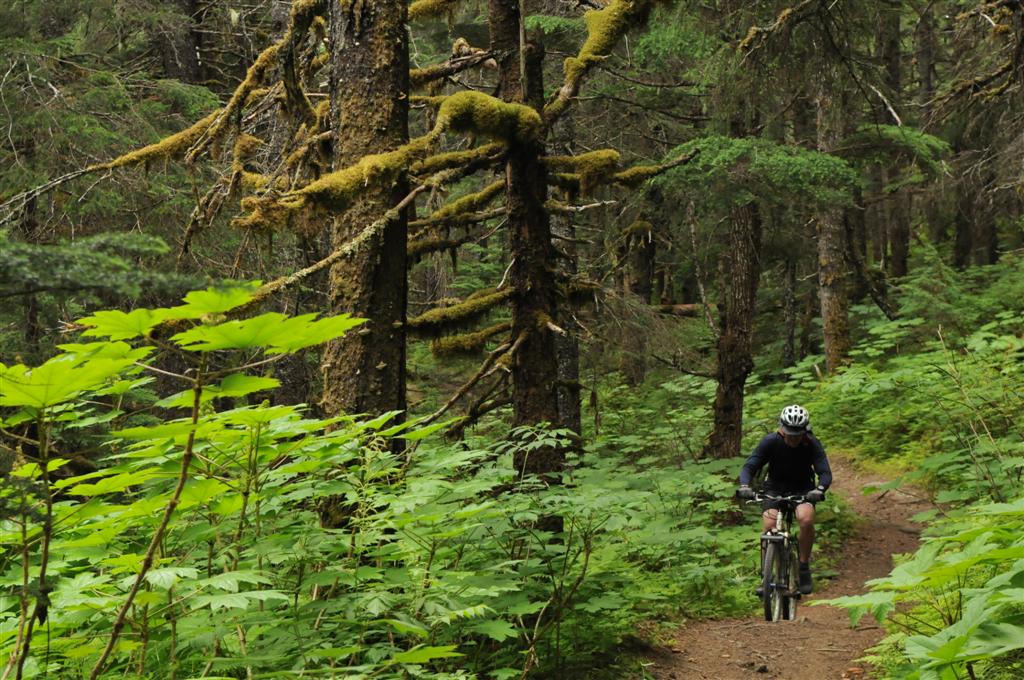 A fairytale setting, and different in feel from anything else we'd ridden.

Then it opened up on onto open, Alpine pastures, blanketed by heavy clouds. Still working its way ever higher, the trail looped on and on. 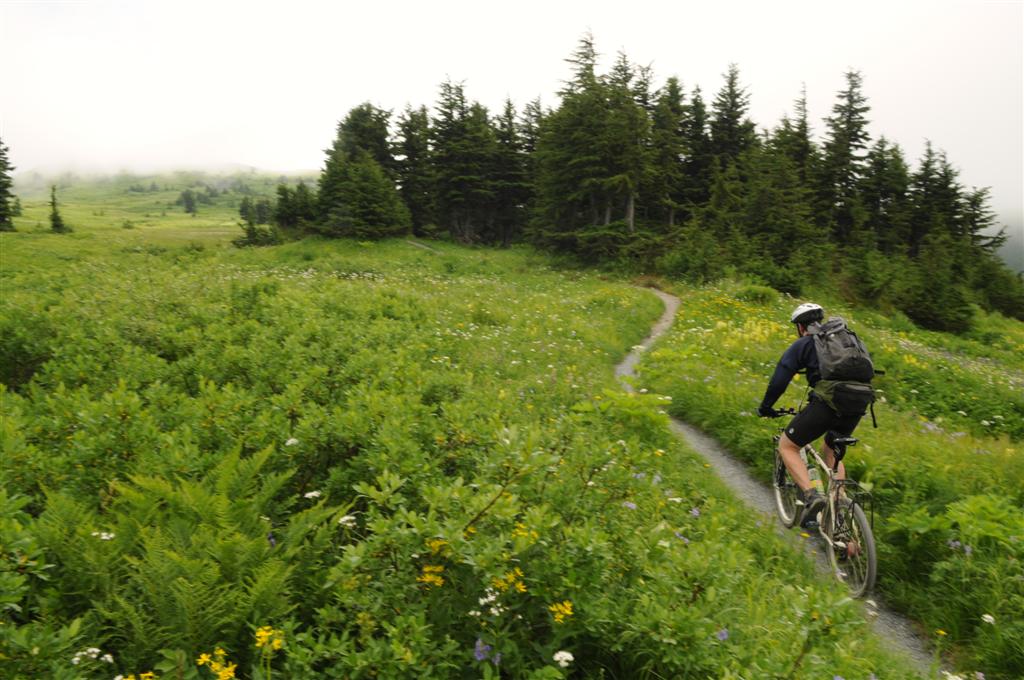 Bonus: no mozzies either. 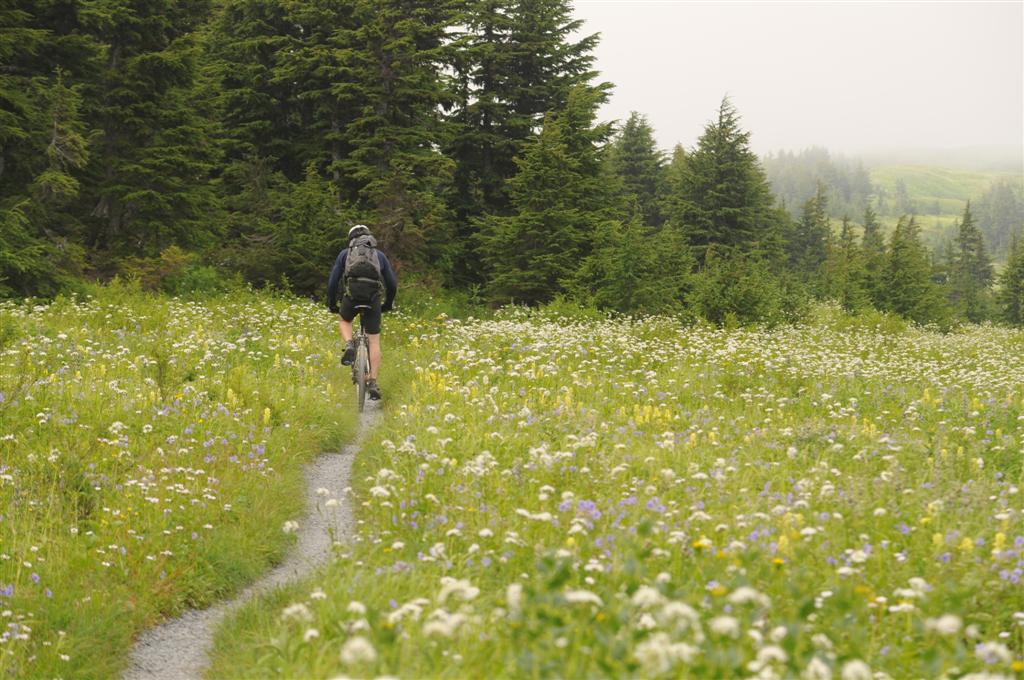 Woodland, alpine and rooty singletrack. Lost Lake is a gem of a trail. 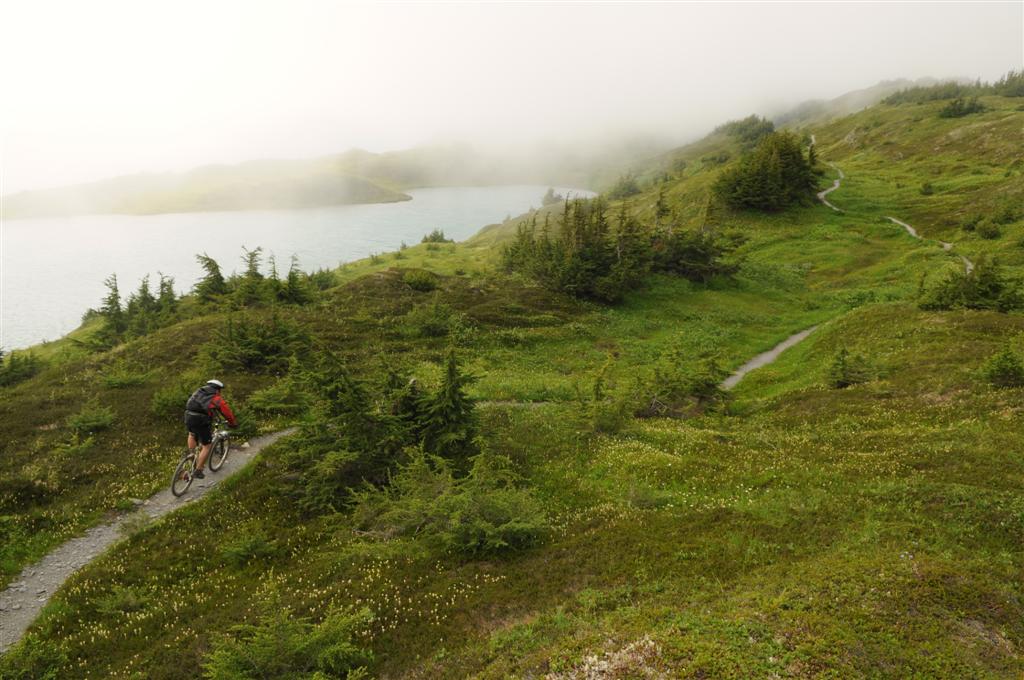 With a highland feel, we could have been back in Scotland. Until the clouds lifted...

What a ride! Enveloped by clouds at the top, it could have been Scotland or Dartmoor – until the mists lifted and rugged peaks and glaciers materialised in every direction and a vast, pancake flat lake revealed itself to us. A lost world, gouged out by glaciers eons ago. Then the trail delved back headfirst into the woods, unrolling its way tightly down the mountain side, knotted with roots to launch off and water drainage crossings to keep us on our toes. 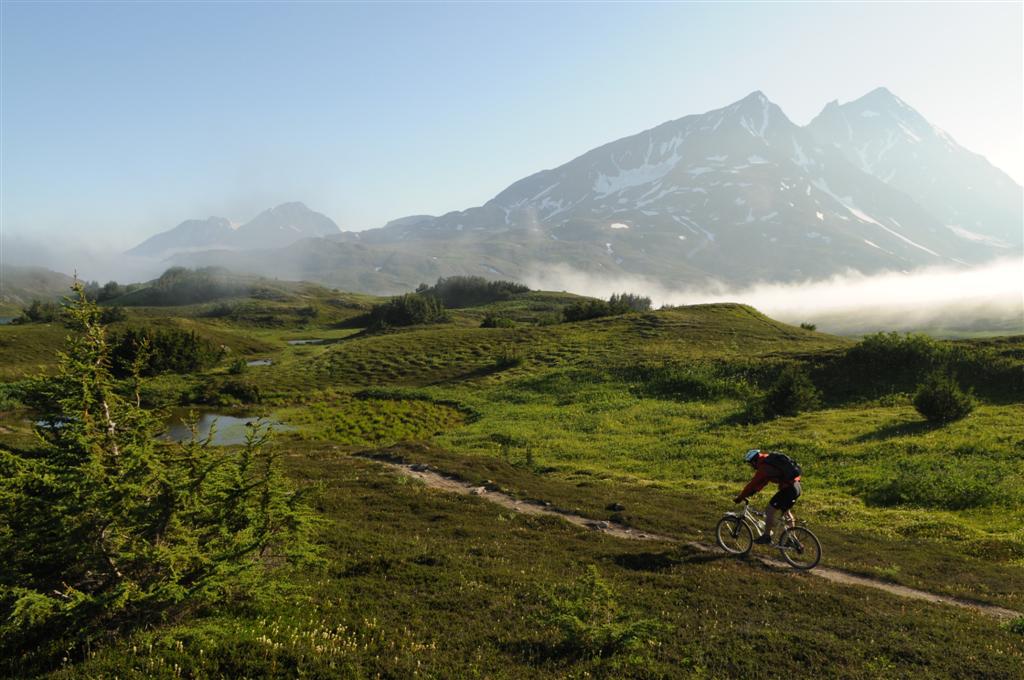 There’s little to compare with riding a near endless ribbon of singletrack, just as a glacier pokes unexpectedly out of the high mountain cloud cover. 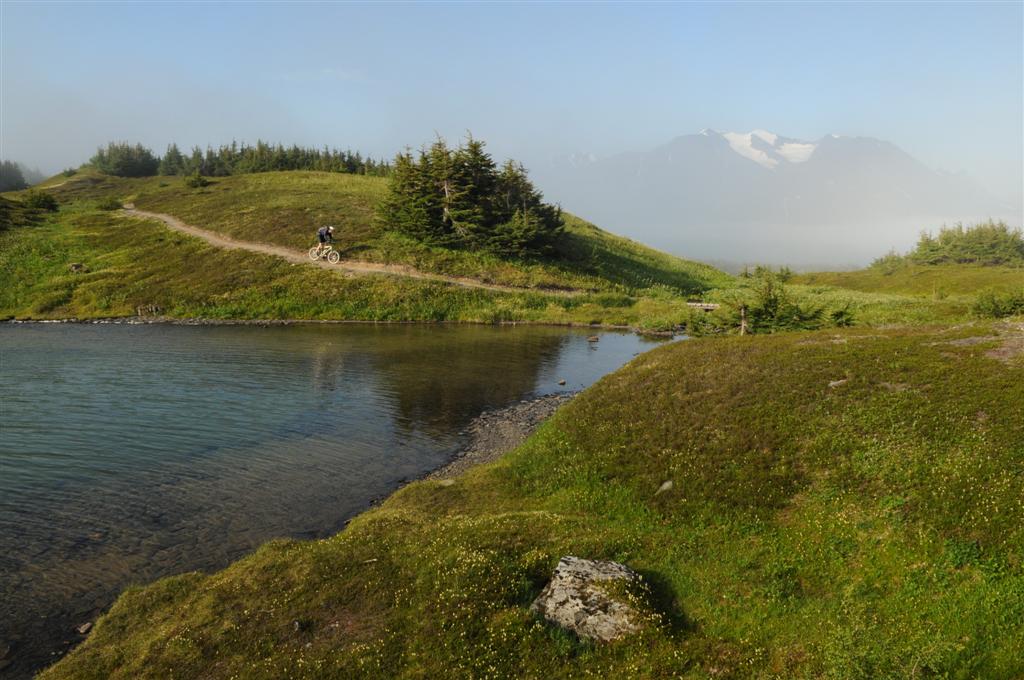 The trail wrapped around various small lakes that reflected the rugged scenery. 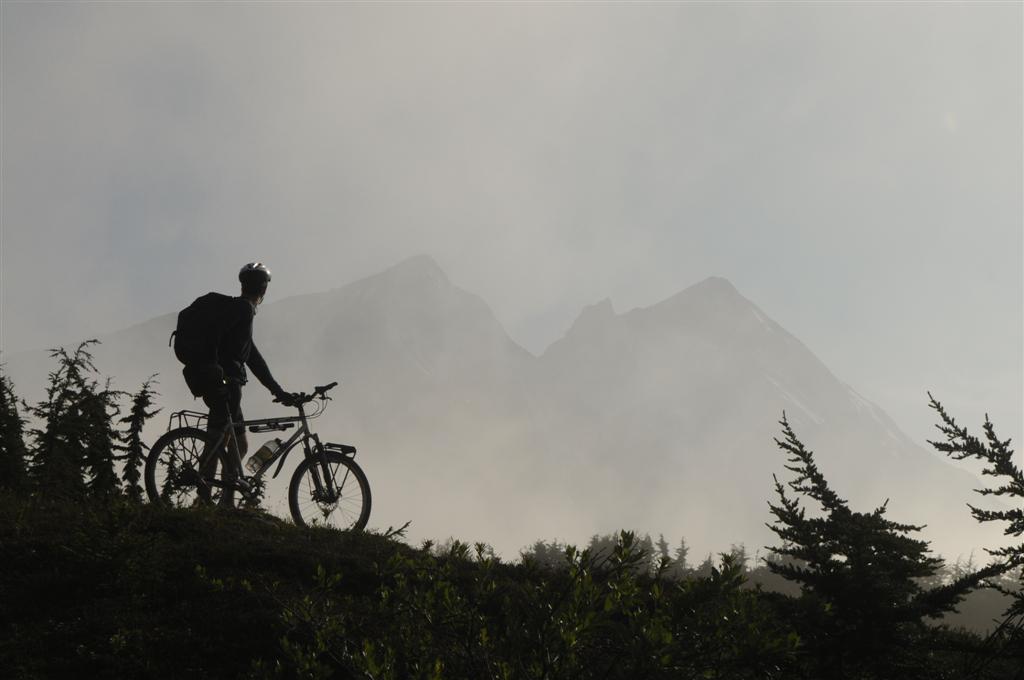 Worth breaking the flow for... 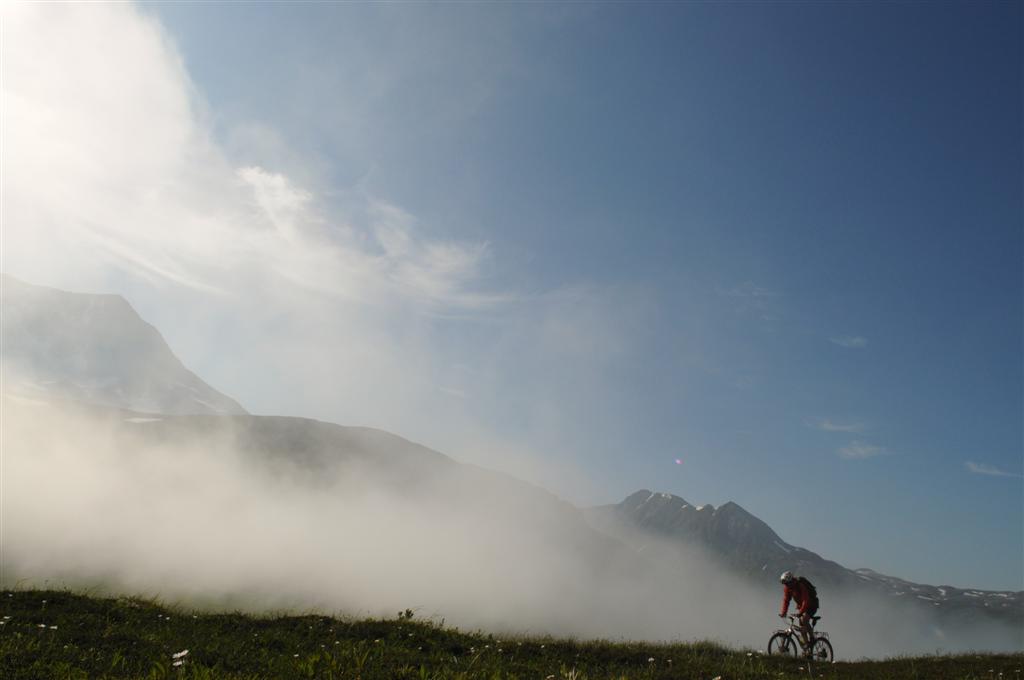 Mist swept in and out, revealing high peaks with a magician-like flourish. 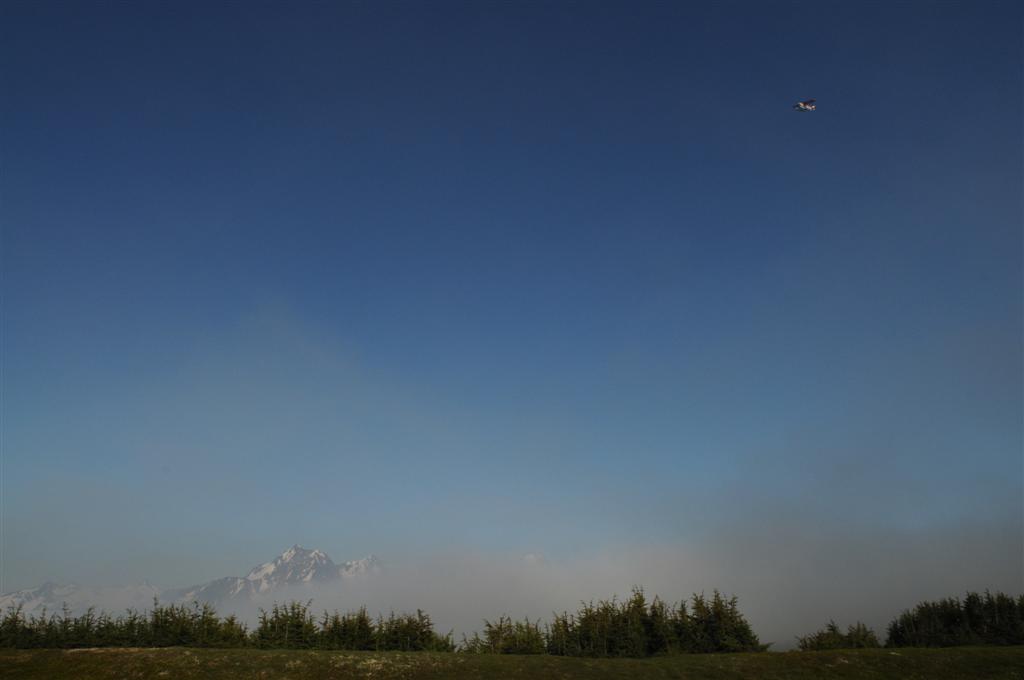 A sea plane buzzed overhead, looking for a break in the clouds to land on Lost Lake.

It was getting late by the time we made it back down to the road. We flagged down a ride with Sean, a young writer, who was driving home after hitching to Homer to buy a baby blue ’72 Chevrolet Blazer. Sitting behind the huge wheel, he had the quiet pride of a new owner. The Chevy resonated with a gurgly, throaty rumble, shimmying across the road when he pressed the brakes; a cranky old giant whose body is beginning to age. Indeed, it swallowed up bikes, via a boot window that was wound down with a chrome foldaway handle.

That night, we camped in Michelle’s yard, a friendly, kooky Oregonian who’d we hitch-hiked with to Seward. We’d really landed on our feet. Warm hearted and completely spontaneous (she set about picking wild flowers while we loaded up the bikes), Michelle had droven us with bare (tattooed) feet,  not only inviting us to camp in her yard, but feeding us delicious slow roasted pork stew when we returned late and exhausted after the ride. After murming a few polite refusals, we tucked in – a welcome change from the pasta that had been sustaining us each day, coupled with the (cold) porridge oats (mixed with orange Tang in lieu of milk) and the cheese /peanut butter sandwiches. We’d stocked up on supplies before leaving Anchorage. Looking into the trolley of pasta, brown bread, cheese, porridge and peanut butter, one guy commented to Dan: you must be one of those health nuts! 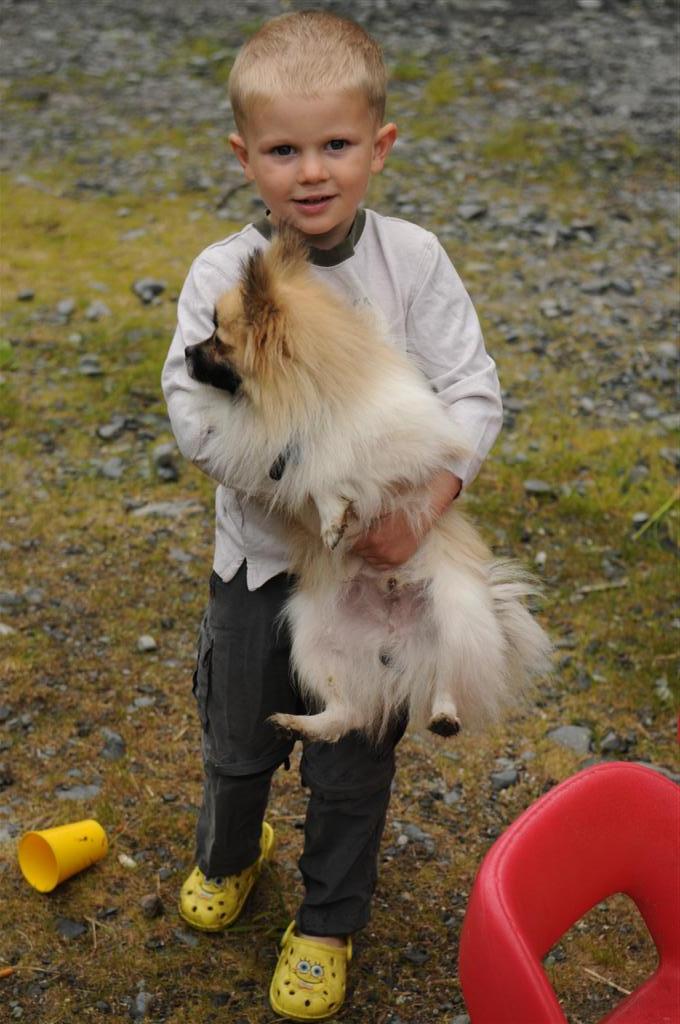 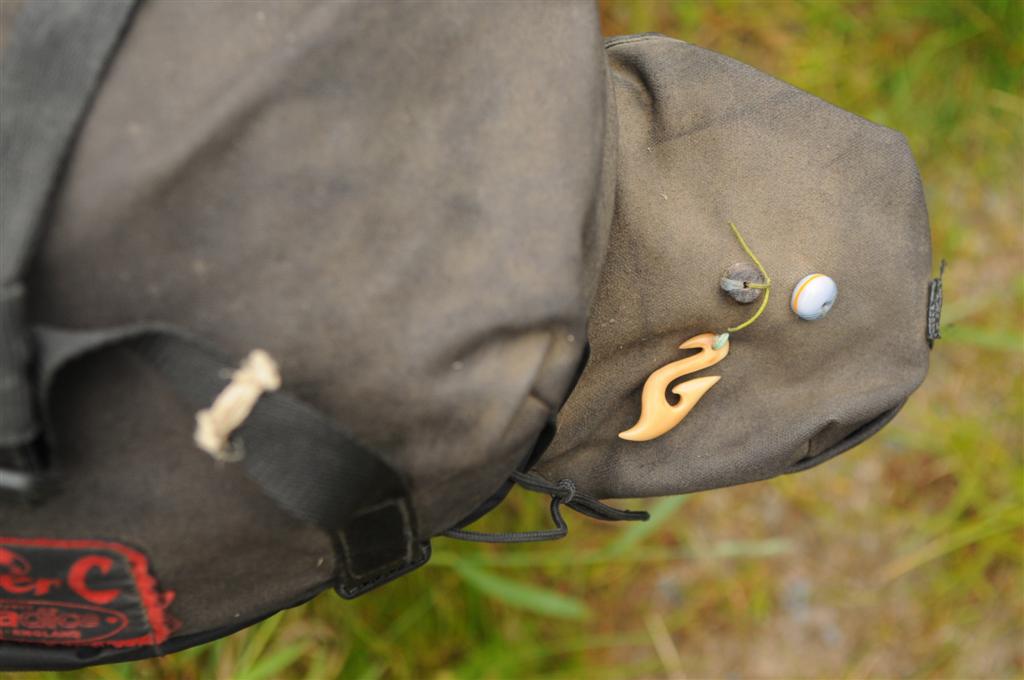 Michelle donated this pendant hewn from caribou bone for my pannier-customisation program. Helps me tell one from the other too!

That evening we chilled out with her friend Chris, and two kids, Eli and Forrest, and their newfound dog – Peanut, a mellow, handbag-sized creature who took an amusing dislike to Dan! As we were finding out, these backwater towns are homes to some interesting, fringe communities. I enjoyed finding out what drew people here, and hooked them in so much to made endure the long winters, when there can be as little as a few ours of light each day. A New Yorker called Melissa popped round too; a friendly, formidable figure with a shock of long, jet black hair. Melissa lived in a yellow school bus pulled up on the roadside that had once been driven up all the way from the lower 48s.

Seward itself teemed with tourists heading out on boat trips to the fjords. Wild strawberries, blueberries and salmonberries sprouted beside the overgrown train tracks and I noticed a drifter-looking character wandering in along the railroad as we headed in. The sun was burning off low cloud by the time we pulled into its quaint downtown, lifting a curtain on the mountains and revealing swathes of forest, a dramatic backdrop to a harbour dotted with hulks of rusty old containers. 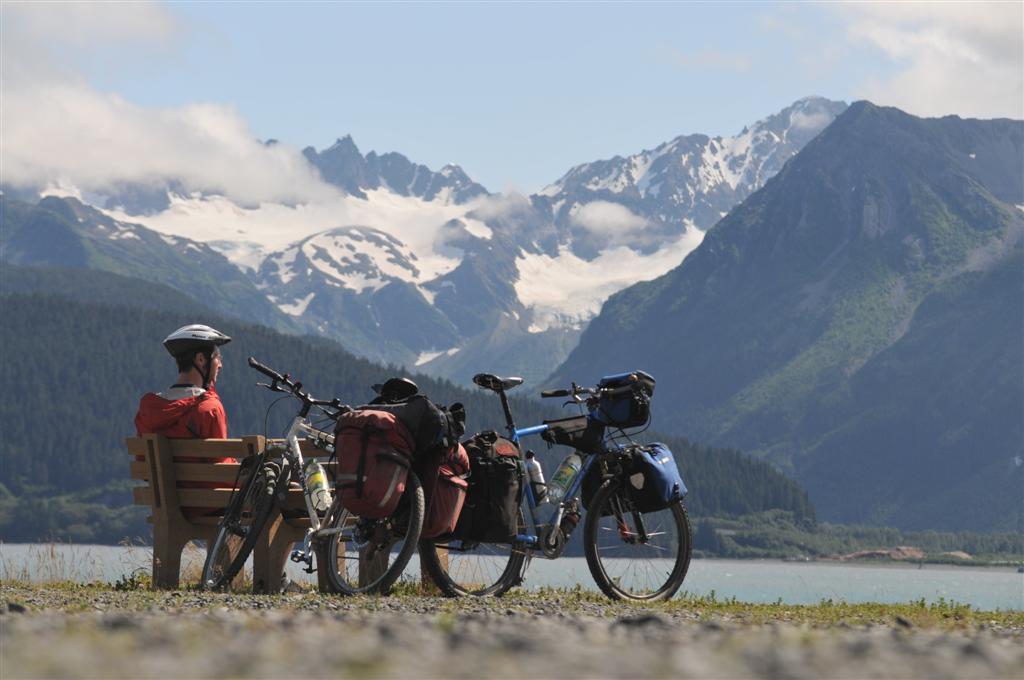 Seward. A good spot for breakfast. 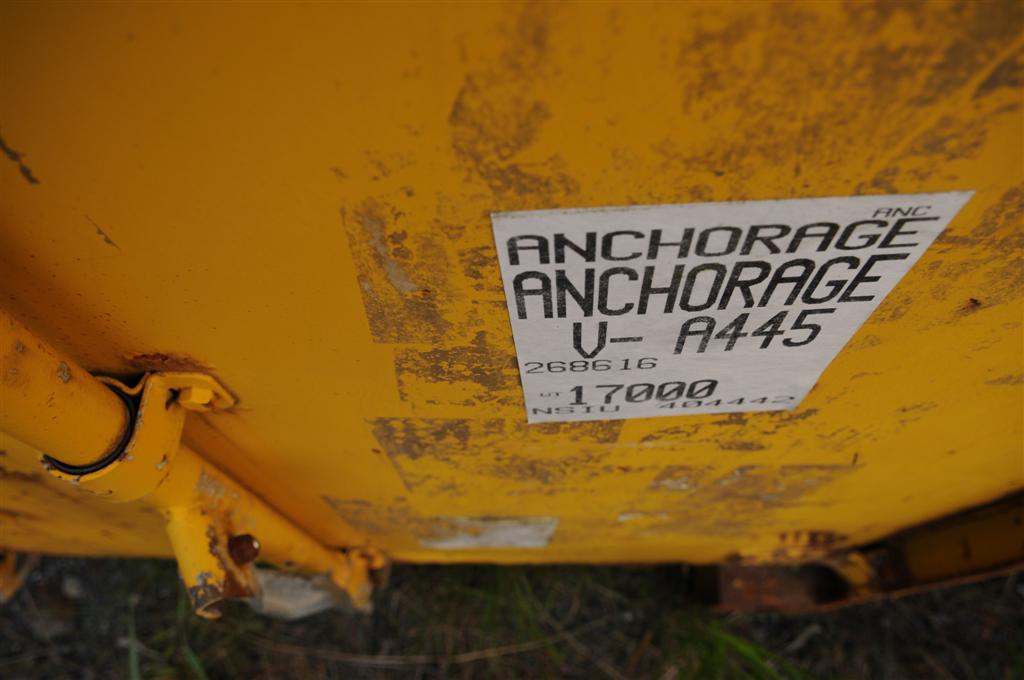 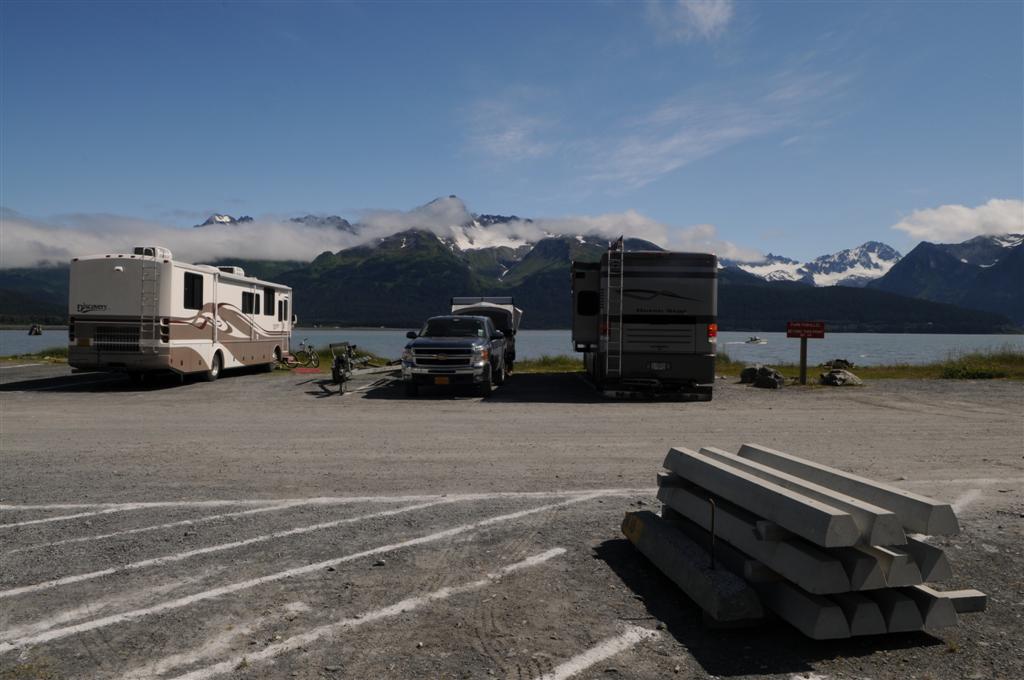 With views like this, why bother getting out of your RV?! 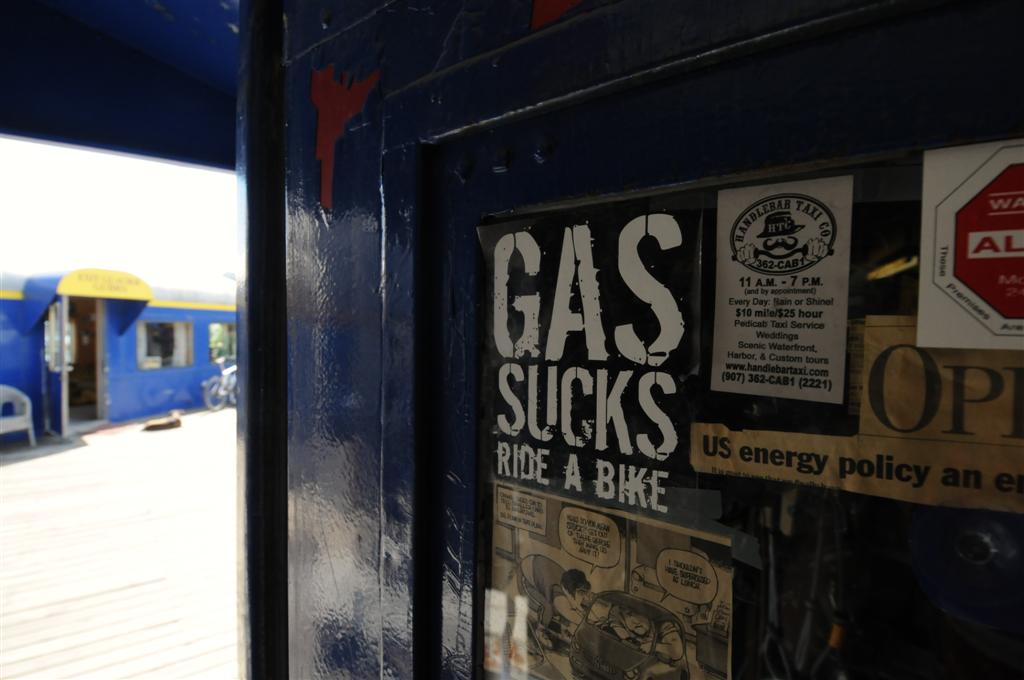 The bike shop in Seward was set in a recycled railway carriage. 'Carriages take up a lot of space in a landfill,' said Ron, who ran the place.

Backtracking to Moose Pass, yesterday afternoon we rode our last trail – Johnson Pass – which linked us back to the road we’d followed to get from Anchorage to the Peninsula. Another swoopy lakeside ride that heaved us up and over the mountains, pinballing us back out on the other side. We’d been warned that it could be overgrown at this time of year, but after the Russian Lake jungle, it felt relatively sparse. We just had to contend with a gang of particular tenacious mosquitoes that chased us up the climb, and a grizzly bear sighting. 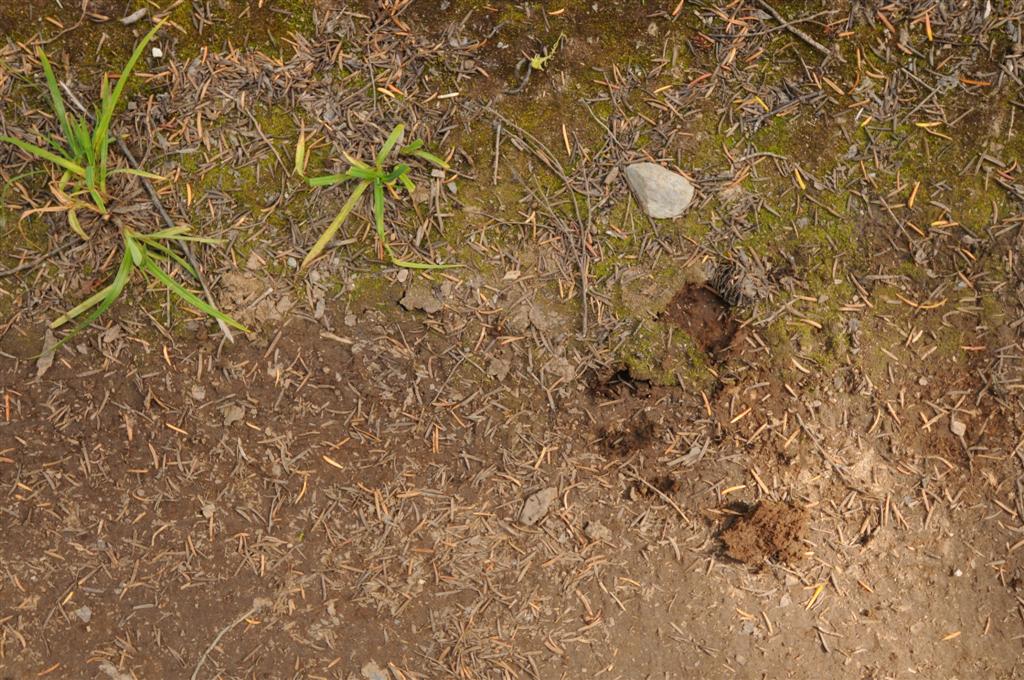 Fortunately by the time we'd spotted the grizzly, it was bounding off, crashing noisily into the undergrowth. It was big... 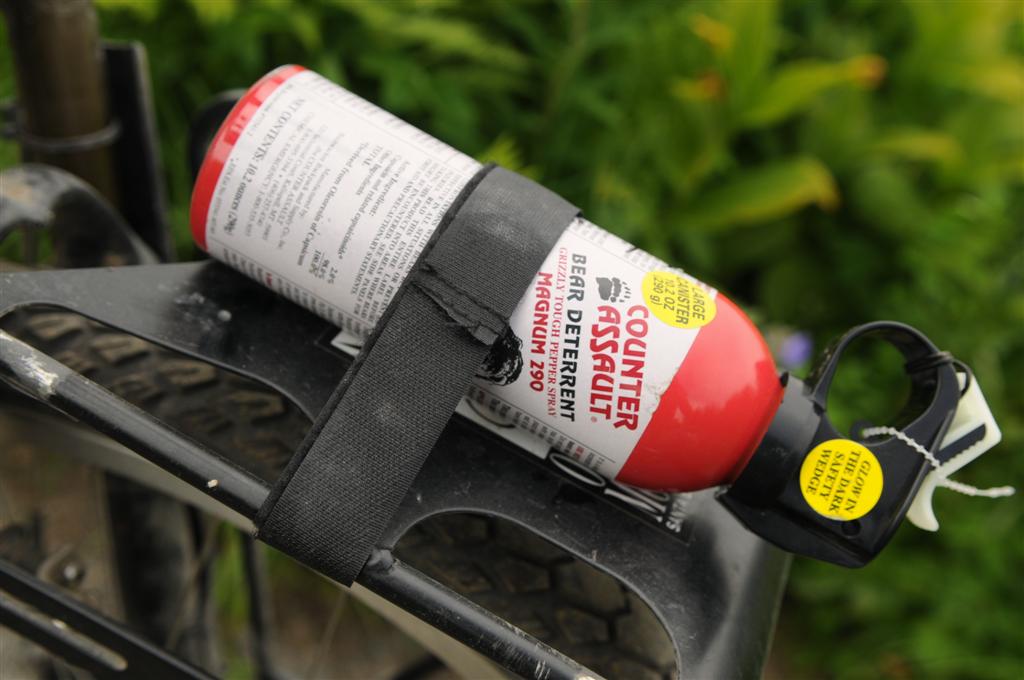 Still, handy to have the bear spray at the ready. The sighting set us off on a renewed round of yodelling. 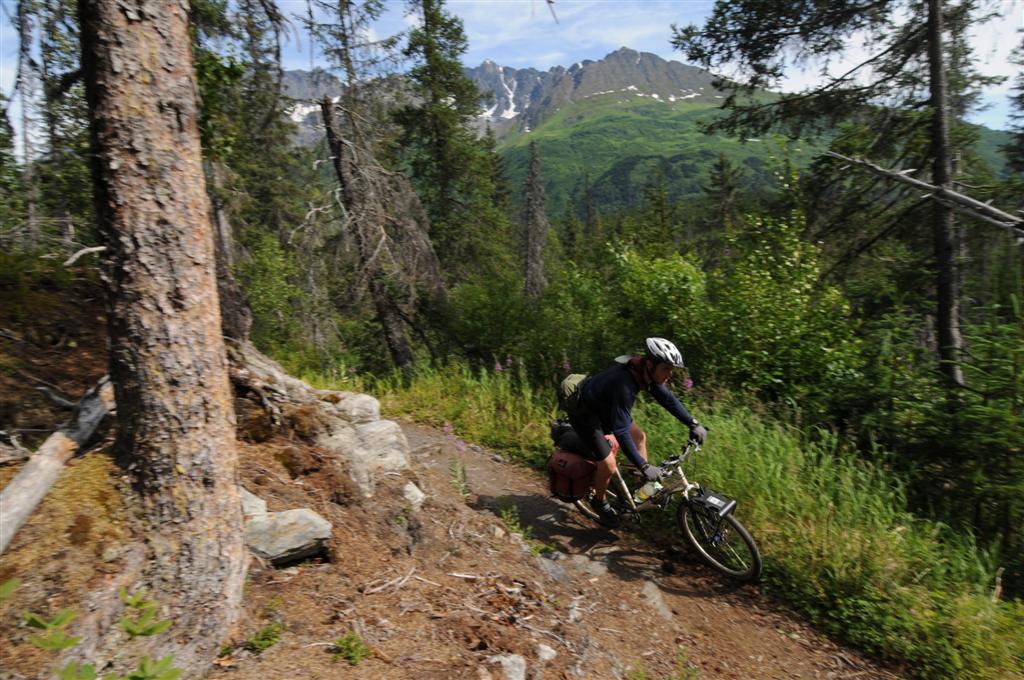 The 22 mile Johnson Trail was the last pass in our singletrack medley.

From there we picked up a ride – hitching in Alaska, even with two fully laden bikes – is remarkably quick and easy. It was 10pm, and within just a few minutes, a pickup pulled over. Alta was a native Alaska back from salmon dipping with her family, and we learnt about her work driving heavy machinery in the lead and zinc mine, set in the reserve to the far north. Chatting away, we got a real sense of how of how close knit the Alaskan communities are. How in touch, despite the massive changes brough through mineral extraction, everyone is with their natural surroundings, hunting only for food, hiking only with a purpose, and looking after each other in times of need… 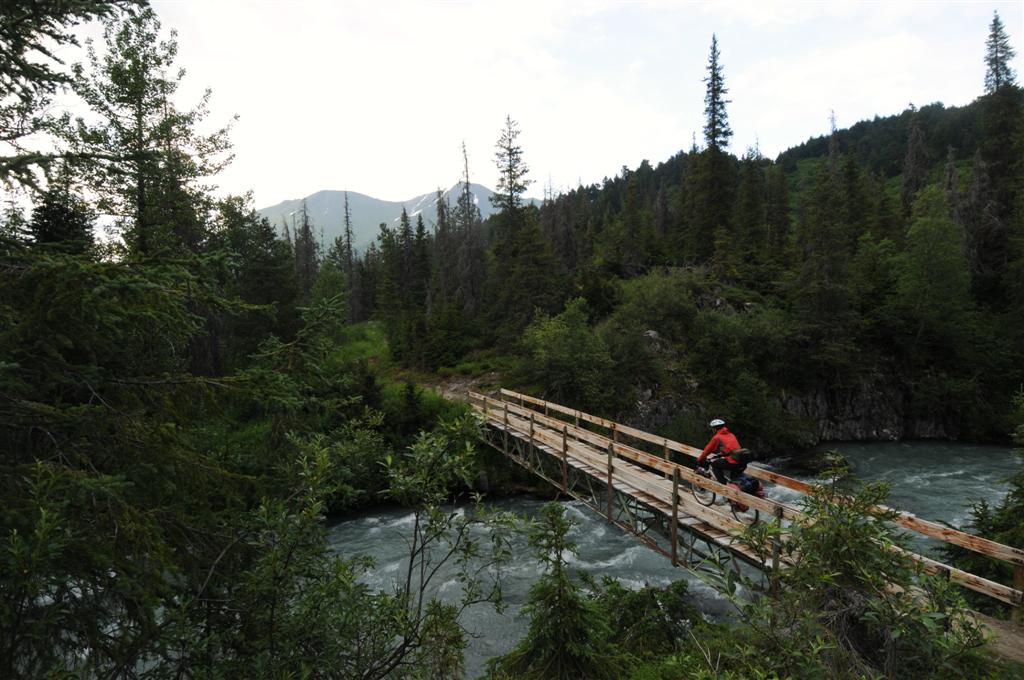 Alta she dropped us right off back at Alan’s bike-strewn yard where we pitched our light in the midnight light. Alan soon emerged, beers in hand, to welcome us back. We’re now planning to next phase of the journey – the ride up to Fairbanks, taking the backway via the Glenn and the Denali highway.

In the meantime, time to give our legs a well deserved break…